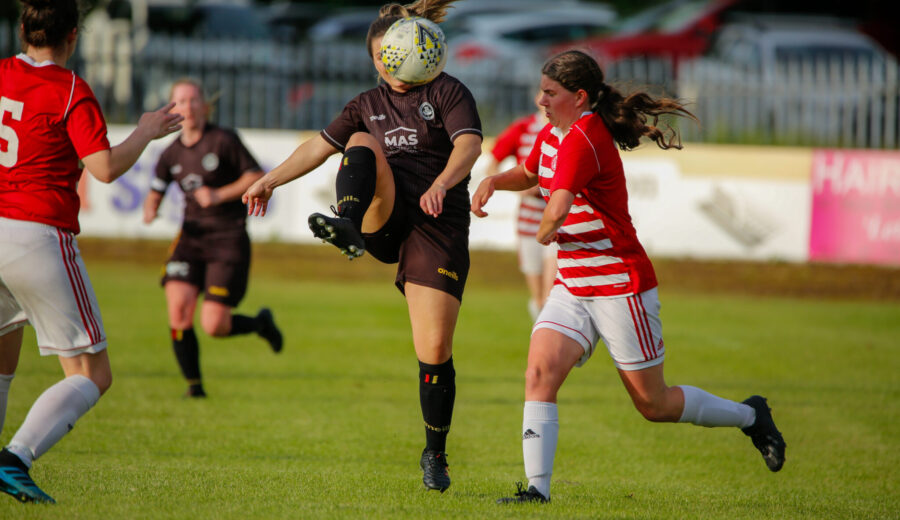 There was disappointment for Thistle as they suffered their first defeat since the resumption of the season when they faced fellow promotion chasers Hamilton Accies in an eagerly anticipated fixture.

Manager Brian Graham made two changes, one enforced, from the side that had defeated Kilmarnock. An unsuccessful appeal again her red card against Kilmarnock meant the Freya MacDonald, so impressive since joining Thistle on loan from Rangers, had to sit this one out through suspension with Kim Murphy coming into the side. The other change saw Jade Gallon replace Teigan McCann in the Thistle starting eleven.
It was the home side that had the better of the very early exchanges, winning the first of many first half corners, in the very first minute but it was Thistle that took a 14th minute lead.

Cheryl McCulloch had taken heavy knock then required lengthy treatment and she had only just returned to the fray when she made a timely interception inside the Thistle box that helped set up a counter attack. A counter attack that culminated in Cara McBrearty firing an unstoppable shot high past Grant in the Hamilton goal.
It was a lead that Thistle were unable to build upon and the scores were again level just 8 minutes after McBrearty’s opener.

In truth the Hamilton equaliser wasn’t unexpected.  Twice Hamilton had come close to levelling things, firstly when a shot clipped the top of Vincenti’s crossbar on its way over and secondly when Vincenti did well to claw away a dangerous looking corner kick.

When the equaliser did arrive there was a hint of controversy surrounding it.
A shot struck Bulloch with the referee deciding it was the hand of Bulloch that it struck and awarded Hamilton the first of two penalties that they would receive with Anderson confidently dispatching the spot kick.

The Hamilton equaliser was the signal for a period of sustained Accies pressure with a series of Hamilton corners causing all kinds of problems for the Thistle defence.
It did look, however, that Thistle might make it to the break still level but with the half-time whistle approaching Hamilton were able to take a lead that on the balance of play they more than thoroughly merited.

Gardiner was able to thread a pass through to Quigley and although Vincenti was able to get a hand to her shot she wasn’t able to prevent the ball from finding the right hand corner of her net.

Thistle made two changes at the break with Trialist and Craig replacing Bulloch and McBrearty and although Thistle started the half on the front foot the ultimate destiny of the points were decided inside the first 10 minutes of the second half.

A second Hamilton penalty, again converted by Anderson, doubled the Accies lead after 54 minutes after a Craig foul almost right on the edge of the Thistle box with a 4th Hamilton goal arriving in indecent haste just a minute later. Giard nodding the ball past the advancing Vincenti before rolling the ball into the unguarded Thistle net.

For a spell it looked as Hamilton might add further goals. Twice in the space of a few seconds the ball crashed off the Thistle crossbar and Vincenti had to be well positioned to make a save.

Gradually though a Thistle side that is certainly not short of spirit began to assert themselves on proceedings and although three goals behind the notion of a Thistle comeback couldn’t be discounted entirely.

An angled shot from Craig following a great cross field pass from Falconer went narrowly wide of the far post and Craig wasn’t quite alert enough to force the ball home after Grant had spilled a Fleming shot.

Jade Gallon made a late run to reach a Craig corner but her header slid off her head and went wide before Thistle were handed a lifeline with 13 minutes of the game remaining when Docherty’s hopeful ball into the box was fumbled over the line by Grant.

Another Thistle goal at this point would have made things extremely interesting indeed and Docherty was nearly able to profit from another defensive mix up from an increasingly uncertain looking Hamilton side but this time her effort, on an angle, was too high.

With 8 minutes remaining and with still time for Thistle to salvage something from the match, the referee who had already awarded two penalties declined to point to the spot for the third time as Falconer appeared to be fouled when attempting to get on the end of a Docherty cross. A decision that earned the Thistle manager a yellow card when he continued his protestations with the match officials at the end of the game.

Tempers got frayed as Thistle continued to press to find a way back into the match and there was a red card flashed towards a Hamilton player deep into injury time but it was too late for Thistle to try and take advantage of their numerical superiority.