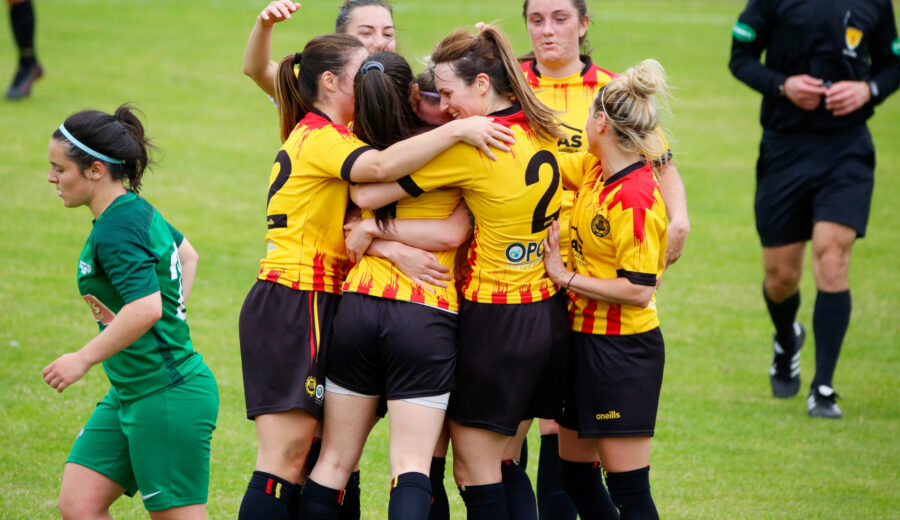 Thistle bounced back from defeat against Hamilton with an emphatic 6-0 win over bottom club Stirling University with the bulk of the damage coming during a first half that saw Thistle find the Stirling net on five occasions.

Brian Graham’s starting eleven showed four changes from the side that had started against Hamilton. There was a welcome return to the side for central defender Taylor McGlashan who had been missing through injury since the Boroughmuir game at the start of the month. There were also starts for Emma Craig, Teigan McCann and Sophie Gallacher, with the last named of that trio having a major impact on proceedings.

Stirling managed a tame effort that Anna Vincenti saved with ease after forcing a corner inside the game’s opening minute but that would prove to be virtually the last piece of action that the Thistle goalkeeper would be involved in during what proved to be a one-sided affair.

Although the vast majority of the action was towards the Stirling goal, Thistle still had to work for their win against opponents that certainly didn’t merely capitulate despite being under consistent pressure.

Thistle came close to opening the scoring before ten minutes had elapsed. A superb pass from Gallacher sent Docherty clear down the right flank. Docherty’s cross found McCann who couldn’t quite the squeeze the ball home at the back post.

The Thistle opener, however, was merely delayed two minutes.

Emma Craig’s corner from the left was flicked on and Cheryl McCulloch was on hand to force the ball home from close range.

Docherty’s tenacity and willingness to chase and harry for everything saw her rob a Stirling defender of the ball. Although she was forced wide Docherty was able to square the ball to Gallacher who slammed the ball home.

Seven minutes later and Thistle were able to extend their lead even further with what was the pick of the goals to that point.

Clare Docherty and Sophie Gallacher were combining to telling affect and it was that partnership that again provided Thistle with the goal.

Gallacher’s slide rule pass picked out Docherty who fired high past the keeper and into the back of the net.

At this stage Thistle looked like scoring every time they strode forward and sure enough a fourth goal arrived after 40 minutes.

A Craig corner was headed back towards goal after being partially cleared and Gallacher as able to climb the highest to nod the ball home for her second goal of the afternoon.

Thistle weren’t finished for the first 45 minutes though and there was still time for a further goal before the half-time whistle.

The last time the two teams met Amy Bulloch scored a spectacular goal that we thought would be hard to top this season. When she fired home from 25 yards out though she had yet another candidate for goal of the season to add to her collection.
There was to be no repeat of the goalscoring form of the first half in the second 45 minutes but it wasn’t for a lack of effort.

McGlashan nearly marked her return to action with a goal with a header that just cleared the crossbar and Docherty again had the ball in the net but this time a raised flag for offside meant that she couldn’t add a further goal to her already impressive tally for the season.

There were Thistle appeals for a penalty that fell on deaf ears after Docherty went to ground in the box and substitute Hawksworth was a little unfortunate that her curling effort from the right hand corner of the box didn’t hit target.

Although the game had been won for some time, a few more goals to boost Thistle’s goal difference would have been highly desirable and Thistle were able to net a sixth goal with 4 minutes of the game remaining when Cara McBrearty’s effort from outside the box evaded the grasp of the visitors’ goalkeeper.

Thistle could even have had a seventh before the finish. McBrearty’s pass found fellow sub Lyle but her shot was well saved with the full-time whistle sounding a short time later.