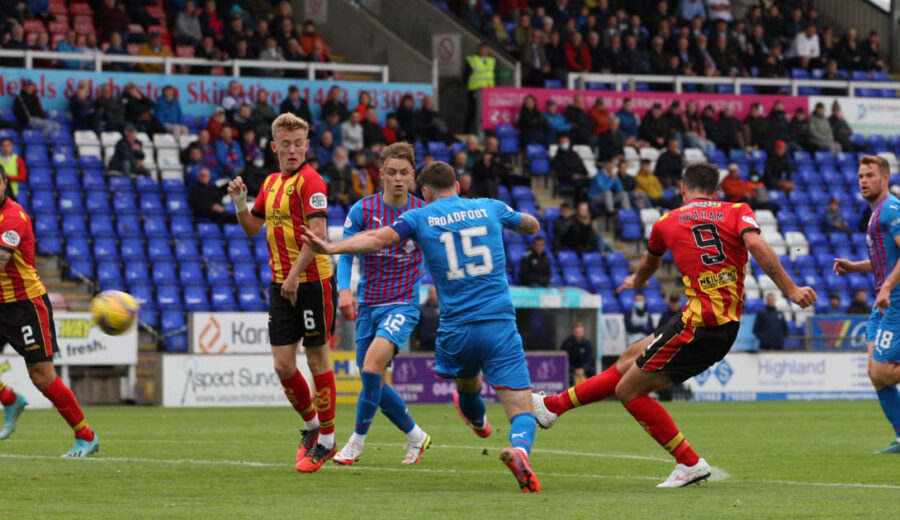 Partick Thistle travelled up the A9 to take on Inverness Caledonian Thistle this afternoon knowing a win would bring them level on points with the Highlanders.

Ian McCall made two changes to the side that started Thistle’s previous league match against Morton. Lewis Mayo returned to the starting line-up in central defence with Tunji Akinola moving to right-back as a consequence while Shea Gordon dropped to the bench. Up front Cammy Smith came into the team for his first league start as a Jag, replacing Zak Rudden.

Following a low key start to the match, the game sparked into life after 18 minutes when Scott Tiffoney fired the away side into the lead. Stuart Bannigan fed the ball out to the Thistle number seven allowing him to drift infield from the left flank. Tiffoney spotted a gap at the near post and drilled a low shot beyond the reach of Caley ‘keeper Mark Ridgers to make it 1-0 to the visitors.

There was almost an immediate reaction from the hosts as Manny Duku went close 20 minutes in. The former Raith Rovers striker nodded a Robbie Deas cross towards the far post and his looping effort seemed net-bound, however, a fingertip save from Jamie Sneddon turned the ball onto the crossbar before he then gathered the rebound.

The Maryhill men sought to increase their lead as the first half ticked on and Brian Graham wasn’t far away in the 24th minute. Richard Foster used a quick one-two with Cammy Smith to move to within 25 yards of the goal and once there, he picked out Graham with a short pass. The Thistle top scorer shifted onto his right foot before attempting to bend a shot into the far corner from just inside the box. His shot was powerful but flashed just past Ridgers’ left-hand post.

Graham was even closer to doubling the advantage seven minutes before the break. Kyle Turner drove forward with the ball, moving the Jags to the Inverness penalty area before laying the ball off to Cammy Smith. The number 11 fed a pass to Brian Graham who found himself in considerable space 12 yards from goal. He dribbled to his left to get closer to goal but when he did eventually take his shot, Mark Ridgers got down superbly to save and hold.

The visitors were made to rue that missed opportunity just six minutes after the second half restart as Billy Dodds’ side drew level. Caley kept hold of possession in the attacking half briefly before working it over to Kirk Broadfoot who was marching out of defence. The experienced centre-half continued his charge under no pressure before hitting a shot across goal, into the bottom corner of the Thistle goal.

The turnaround was complete with 68 minutes on the clock as Shane Sutherland put Inverness ahead. Former Jag Danny Devine had the ball behind the half-way line and, with no options forthcoming, decided to lift a ball over the top of the Thistle defence. Jamie Sneddon rushed out to deal with the pass but overran the ball didn’t get anything to it. This left former Elgin striker Sutherland with a simple finish into the gaping net.

The Jags’ second half struggles were compounded when Aaron Doran added a third for the hosts with 18 minutes left to play. David Cason advanced down the right flank before delivering a low ball into the danger area. Manny Duku was in place to take a shot but he dummied the ball for Aaron Doran who picked out the top corner with a first time strike.

That’s how the game ended with Thistle falling to fourth spot in the league while Inverness maintained their early lead at the top of the Championship and their 100% record.

Next up for the Jags is a clash with Kilmarnock who moved up to second place at the weekend. It’s a 3pm kick-off next Saturday, 18th September at Firhill.