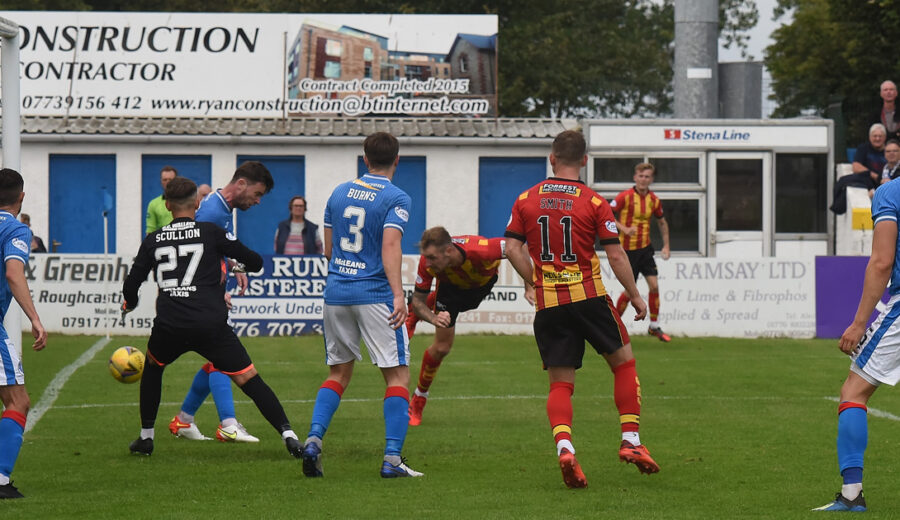 Partick Thistle got their 2021/22 SPFL Trust Trophy campaign up and running today as they took on Stranraer at Stair Park.

The Jags made the trip South-West on the back of a 3-0 win over Greenock Morton at Firhill seven days prior with the hopes of booking themselves a place in the third round.

There were three changes to the team that started that triumph over the ‘Ton in Maryhill. Connor Murray replaced Kyle Turner on the right side of the midfield and Ross MacIver took Brian Graham’s place at fore of the Thistle attack. Cammy Smith was the other player who came into the team making his first start as a Jag in place of Zak Rudden who was away with the Scotland under 21s squad.

Ian McCall’s side started the game on the front foot and were rewarded for their early efforts when Tunji Akinola struck home the opener after 12 minutes. A Connor Murray corner towards the front post fell between Ross Docherty and Akinola and the latter took control of the ball and began dribbling away from goal. He had the option of a lay-off to Shea Gordon but instead opted to swivel onto his left foot and take the shot on. His effort flew towards goal, finding the back of the net with plenty of power to give Thistle the lead.

Jamie Sneddon had to be on his toes to deny Stranraer a near-immediate response in the 16th minute. Ross Smith latched onto a loose ball in the Jags’ box and tried a shot from 15 yards out, seeing his effort blocked by Kevin Holt. However, the deflection only sent the ball looping towards the top corner meaning Jamie Sneddon had to get across his goal quickly to turn the shot away.

The home side went close to a leveller again 10 minutes later with Jamie Sneddon called into action for a second time. As the Blues tried to force a way through the Thistle defence on the left flank Tunji Akinola got a tackle in which sent the ball rolling towards Sean Burns. The Stranraer defender, who must have spotted Sneddon a few yards off his line, then tried to lob the Thistle goalkeeper from 30 yards. Sneddon backpedalled swiftly and tipped the ball over the bar to deny the hosts the equaliser they were seriously threatening to get.

The next big chance of the game arrived with 37 minutes on the clock through Connor Murray. The winger was given the ball on the left flank and cut onto his right foot before trying one of his trademark curling efforts towards the far corner. It was on target and required a solid hand from former Thistle Weir Youth Academy goalkeeper Luke Scullion to turn it behind for a corner.

The visitors’ push for a second goal continued as half-time drew close with Ross MacIver going close six minutes before the break. Ross Docherty made a diagonal run into the penalty area which Stuart Bannigan picked out with a chipped ball forward. The skipper drove a first time ball into the goalmouth area which ricocheted up off a defender into MacIver path. The number 19 attempted a drilled half-volley but his strike was too central and Scullion was able to save with his legs before watching Cammy Smith fire the rebound comfortably wide.

Thistle started the second half with the same attacking impetus that they ended the first with and that led to another great opportunity to double their advantage 10 minutes after the restart. Ross Docherty was given the ball in the defensive half and he turned away from one Stranraer man before playing an inch-perfect pass into Connor Murray’s path as the number 17 broke away from the home defence. He raced into the Blues’ box and took the shot on from about 12 yards out, however, Luke Scullion was on hand again to make the save and keep his team within a goal of the Jags.

Stranraer then began to force their way back into the game in search of that crucial equaliser and they weren’t far away from finding it with a 67th minute free kick. Substitute Matt Yates stepped up to take it from 20 yards out and his shot was only a yard or so over the crossbar.

In the 73rd minute, Jamie Hamill’s side had an even better chance to restore parity, from a free kick once again. This one was from much further away with Sean Burns lifting a ball into the Thistle box from near enough the half-way line but he was able pick out Craig Ross in considerable space near the back post. Under no pressure Ross attempted the volley but got the connection all wrong meaning the ball bobbled into Jamie Sneddon’s arms when he really should have been making it 1-1.

Any hopes of getting level for the home side were snuffed out in injury time when Kevin Holt headed home his third of the season. A Kyle Turner corner was floated into Stranraer box and Blues defender Ayrton Sonkur was first to it, however, his clearing header was misdirected and went straight to Holt who simply nodded home past the defender on the near post. That made sure of the result for Thistle and secured their spot in the next round.

After that second goal went in, there were two debuts for the Maryhill men with Thistle Weir Youth Academy players Ji Stevenson and Ben Stanway coming off the bench to replace Scott Tiffoney and Stuart Bannigan for the final minute or so.

The win sets up a third round meeting with Queen of the South at Palmerston Park, to be played on the weekend of 9th/10th October.