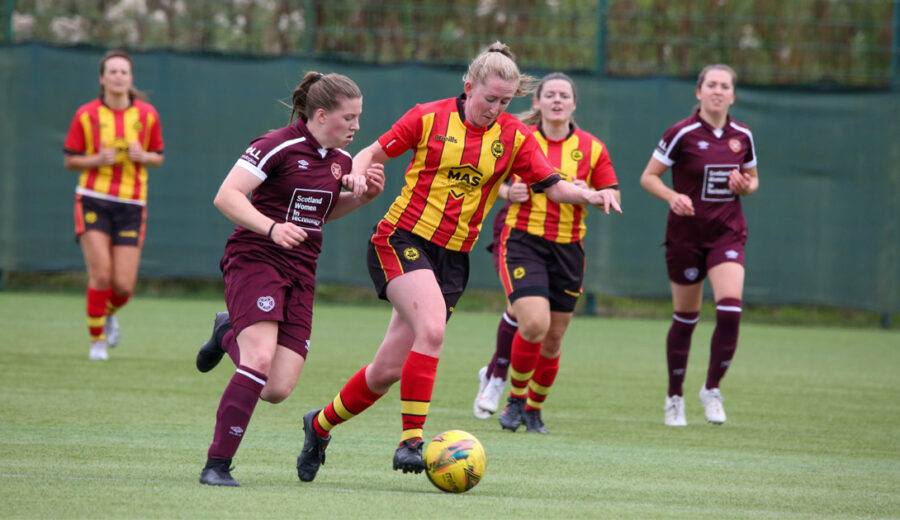 After defeat to Celtic and victory over St. Johnstone, it all came down to the final SWPL Cup group stage game for Partick Thistle Women’s FC to determine whether they’d make the cut for the competition’s quarter-finals.

They travelled to Edinburgh to take on fellow SWPL 1 side Hearts Women who were still in with a chance of progression if they could beat the Jags comfortably.

Brian Graham’s squad was depleted heading to the capital and as such he was only able to name two substitutes with recent signing Danica Dalziel joining youngster Eva Payne on the bench. Lauren McGregor made her first start in goals behind a back four of Freya Macdonald, Demi Falconer, Cheryl McCulloch and Kim Murphy. In midfield, captain Colette Fleming was joined by Jade Gallon and Cheryl Rigden in the centre while Emma Craig and Sophie Payne, Eva’s twin sister, provided the width. The team’s top scorer Teigan McCann started up front looking to add to her three goals so far this term.

The first notable moment of the game came after ten minutes when Emma Craig picked up an injury which forced her off the field of play. She was replaced by Danica Dalziel, who was making her debut for the club.

The away side were forced into another substitution just shy of the half-hour mark when Jade Gallon picked up an injury. Eva Payne came on for Gallon, also making her Thistle debut off the bench.

There was a dearth of goalmouth action in the first half though Thistle did eventually get a sight of goal as the opening 45 minutes drew to a close. Sophie Payne was able to dispossess one of the Jambos’ defenders from behind, toeing the ball into Teigan McCann’s path. The number seven tried a snapshot from a tough angle but did get the desired lift on the effort, only finding the gloves of Hearts goalkeeper Charlotte Parker-Smith.

During an extended bout of injury time, Hearts tested Lauren McGregor for the first time. Jennifer Smith was able to win the ball from Colette Fleming 20 yards from goal and she tried her luck with her right foot. She found the target but McGregor was well-placed to turn the ball away with her legs.

The pressure on the Thistle goal became a bit more consistent as the game moved into the second half and the hosts almost took the lead from a free-kick in the 54th minute. Hears’ number 73 Maria McAneny stepped up to take the set piece which was situated 20 yards from goal on the right side of the Thistle half. The attacker tried to pick out the top corner but put too much height on her effort meaning it cleared the bar.

Thistle’s resolute defending continued to frustrate the home side with Hearts forced to shoot from long-distance more often than not, however, they did manage to craft another decent opportunity for Maria McAneny with 15 minutes left to play. Amelie Birse was played the ball on the right side of the Jags’ box and she picked McAneny out in considerable space. McAneny set herself and rifled a low effort towards goal, however, Demi Falconer was perfectly placed to make a potentially goal-saving block which eventually rebounded into Lauren McGregor’s arms.

The final chance of the game fell to Georgia Hunter who got on the end of a Hearts corner at the back post but she couldn’t direct a header on target under pressure from Cheryl McCulloch.

The 0-0 draw was enough for the Jags to make it through to the last eight of the SWPL Cup where they’ll meet Glasgow City at Petershill Park in what is technically an away tie. That fixture will take place on 31st October.