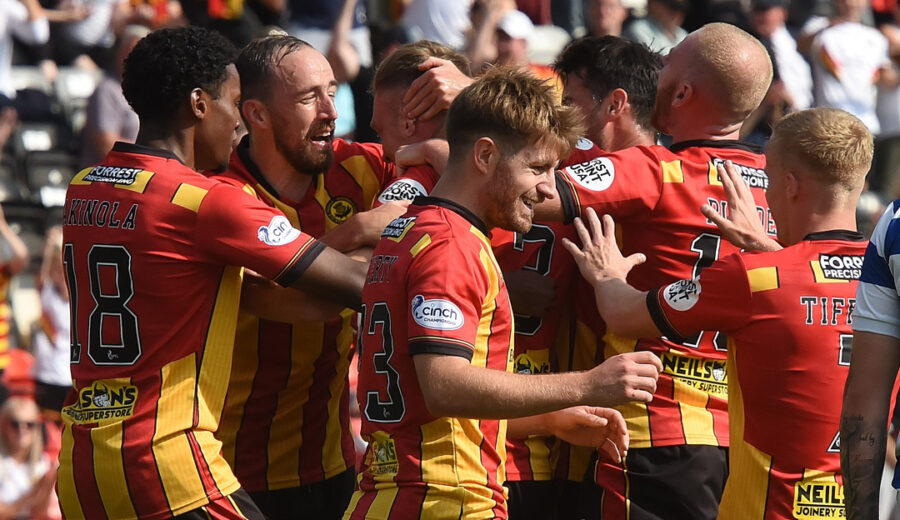 Following their first defeat of the 2021/22 cinch Championship season Partick Thistle were looking to bounce back as they welcomed Greenock Morton to Firhill.

Ian McCall made four changes to the side that lost at Gayfield the week before with Harry Stone, Lewis Mayo, Ciaran McKenna and Ross MacIver coming out of the starting line-up to be replaced by Jamie Sneddon, Tunji Akinola, Shea Gordon and Ross Docherty who returned to the squad having missed the trip to Arbroath through injury. Jake Hastie was named in the squad for the first time since signing and Thistle Weir Youth Academy players Ben Stanway and Ji Stevenson were also on the bench with him.

Thistle started quickly and forced Jack Hamilton into his first save of the match after eight minutes. Brian Graham pinched the ball off Alan Lithgow in the Morton half, poking it towards Zak Rudden who promptly took aim from 30 yards. The striker’s right-footed shot bounced up just in front of Hamilton but the ex-Hearts ‘stopper was able to turn the ball round the post.

The Morton resistance didn’t last much longer though as Kevin Holt scored from the resulting corner. Kyle Turner delivered one of his trademark corners into the visitors’ penalty area and Holt was first to it, guiding a header towards the top corner. Neither the goalkeeper nor the man on the post could get to it and the ball found the back of the net to give the Jags the lead.

There was almost a second quickly after as stand-in right-back Shea Gordon fed Scott Tiffoney through on the right-hand side of the Morton box. The winger tried to beat Hamilton high at his near post but the Cappielow custodian reacted well to push the shot over the bar.

Thereafter Morton enjoyed a spell of dominance, however, they failed to convert that into chances and the Jags actually continued to threaten on the break. A chipped ball into the box was brought down by Zak Rudden and the former Falkirk man turned away from his marker before firing towards goal. Unfortunately for him, he didn’t get the intended whip on the shot and his attempt sailed into the John Lambie Stand.

After a very even first half, Thistle were keen to put the game to bed early in the second and that came to fruition as Zak Rudden scored within two minutes of the restart. The Jags applied some initial pressure straight from kick off and couldn’t find a way through so the ball was worked over to Richard Foster on the left-hand side. He lifted a pass over the Morton backline to get Scott Tiffoney into a crossing position and the number seven lofted the ball into the centre of the box where Zak Rudden was waiting. He let the ball drop and volleyed towards goal, finding the back of the net for his first goal of the new league campaign.

A third followed shortly after with Kyle Turner’s corners causing more problems for the away side. Turner curled another ball into the goalmouth area and this time Brian Graham jumped highest, directing the ball into the net to make it 3-0 and take his personal tally for the season to seven.

Kevin Holt almost struck again in the 64th minute as he got on the end of another Turner corner. This one was a flatter delivery which was missed by a couple of defenders at the near post area. It landed right in front of Thistle’s number three but he couldn’t sort his feet in time to get a proper shot away and it ricocheted off him and over the bar.

The two sides traded half-chances in the latter stages until Brian Graham had the game’s final big opportunity. Connor Murray fed a reverse ball into Graham’s path and the striker tried to slot home across the goalkeeper, however, Hamilton made the save with his foot meaning the game finished 3-0 to the hosts.

Now, the Maryhill men look ahead to their SPFL Trust Trophy clash with Stranraer at Stair Park which has the unorthodox kick-off time of 1pm.