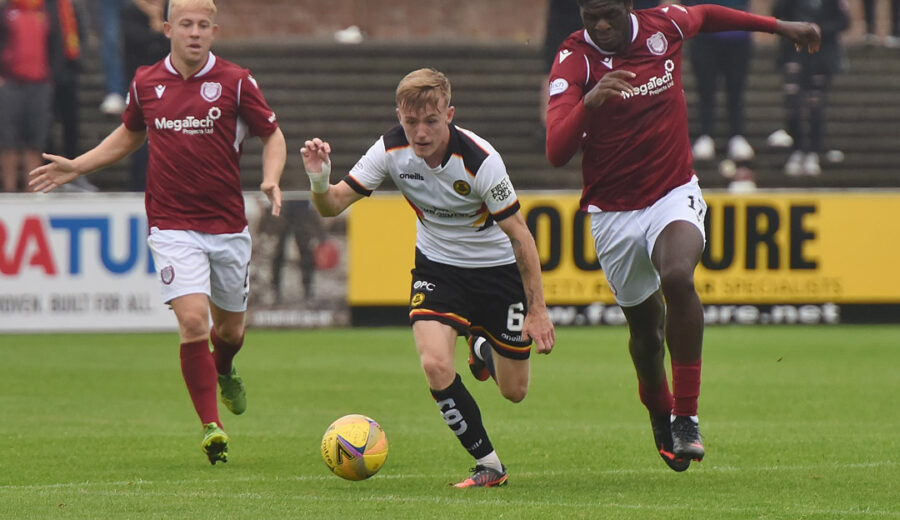 The Jags made one change to the team which started their 3-0 win over Dunfermline Athletic a fortnight prior with captain Ross Docherty dropping out of the squad due to injury, being replaced in the line-up by Ross MacIver.

The first half-chances of the match fell to Scott Tiffoney and Michael McKenna as the two sides felt their way into the match but Tiffoney popped up again in the sixth minute with the game’s first clear-cut opportunity. He weaved his way through a couple of challenges before taking aim from a tight angle. His low shot was on target but Arbroath ‘keeper Derek Gaston was able to turn it away with his feet.

Thistle were forced into an early change in the 25th minute when Ciaran McKenna suffered a shoulder injury following a full-blooded challenge near the half-way line. This meant a Jags debut for Tunji Akinola who slotted into the right-back spot Ciaran had been occupying.

This didn’t seem to faze the visitors though with Ian McCall’s side taking the lead after 34 minutes. The goal came about as a result of Kyle Turner’s perseverance with the number six picking the ball up in midfield before playing a one-two with Brian Graham and driving through the heart of the hosts’ defence. Once he reached the penalty area he fired towards goal and although Derek Gaston was equal to his effort, it rebounded off Red Lichties defender Colin Hamilton into the net.

Unfortunately for the Maryhill men, they didn’t reach half-time with their lead intact. A foul given away 20 yards from goal would prove costly for the Jags as Michael McKenna stepped up and curled an effort into the back of the net via a touch from Harry Stone and the inside of the post.

Coming out for the second half it was the home side who looked much the better team and former Jag James Craigen almost put them in front three minutes after the restart. Joel Nouble lifted a pass over the Thistle defence into Craigen’s path and the midfielder tried to finish into the far corner, however, Harry Stone was able to parry away from goal.

Thistle then had the ball in the back of the net as Zak Rudden headed home what he thought was his first goal of the league season but Brian Graham was adjudged to have committed a foul as he nodded home and the goal was ruled out.

Two minutes later it was Arbroath who had the ball in the net and there was nothing wrong with their effort. Again Nouble was at the centre of things as he shook off two defenders on the left flank before delivering a pinpoint cross to Michael McKenna at the near post. The number eight headed home powerfully to give Dick Campbell’s side the lead and get his second of the day.

A tough start to the second half for the away side was compounded when Nicky Low made it 3-1 in the 57th minute. After a Thistle corner was repelled, Tunji Akinola turned the ball back to Harry Stone. The ‘keeper then tried to pick a teammate out in the midfield only to see his pass intercepted by Low. The former Dundee player set himself before curling a left-footed shot past Stone and into the gaping goal.

That third for Arbroath left the Firhill side with a mountain to climb and despite plenty of possession and no shortage of effort, chances were at a premium in the closing stages. Cammy Smith was introduced off the bench and his arrival provided a spark in the Jags’ midfield but the closest he came to reducing the deficit was a strike from 25 yards which ended up flying just over the bar.

Kyle Turner was able to set up Brian Graham for a tap-in in the dying moments of the match but Thistle were once again denied by the officials with the offside flag their enemy on this occasion.

So that’s how things finished with Arbroath running out 3-1 winners as Thistle’s recent struggles at Gayfield continued. Thistle’s attention turns to their return to Firhill to face Greenock Morton in more cinch Championship action.