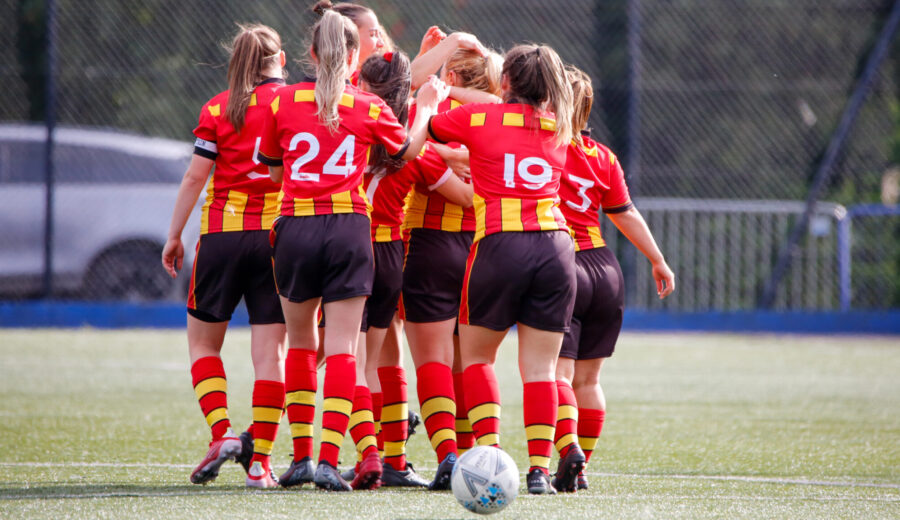 Thistle rounded of an eventful, and momentous, week off the pitch with a resounding victory on the pitch. The 4-0 SWPL Cup win away to St Johnstone highlighting the ability within squad and while sterner tests undoubtedly lie ahead this performance suggested that this group of players are more than capable of facing those challenges ahead.

Brian Graham’s team selection showed four changes from the side that, although defeated against Celtic in the season’s opener, produced a performance that much encouragement could be taken from.

Immediately prior to kick-off Graham stressed to his players the importance of adopting a positive approach to proceedings and they certainly paid heed to that instruction taking the lead after just five minutes play.

Last season Cheryl Rigden bagged herself eight goals and on the evidence of the quality of her first strike of this season there will be plenty more to follow this season too. After collecting the ball 20 yards from goal, the Thistle number 19 looked up before firing a shot beyond the reach of Cameron in the St Johnstone goal.

That goal set the tone for the rest of the afternoon, with Thistle taking a firm grip of the game.

Just three minutes after Rigden’s opener, Thistle were desperately close to a second goal. Teigan McCann was able to get in behind the Saints defence and although her angled shot beat Cameron it rolled just the wrong side of the far post.

McCann though would only be denied a goal for a further eight minutes.

Scorer of the Thistle goal against Celtic, McCann was able to profit from a defensive mix up to whip the ball round Cameron before tucking the ball into the empty net.

That completed the scoring for the opening 45 minutes although how the score remained at just 2-0 as the half-time whistle blew is a mystery.

Rigden’s late run allowed her to connect with a Craig corner after 21 minutes, but her header dropped wide of target. She was even closer to a goal just five minutes later when she saw a header rebound off the St Johnstone crossbar.

That wouldn’t be the last time that Thistle would strike the frame of the St Johnstone goal either.

With 28 minutes played Eleanor Smith strode forward before thundering a shot off the underside of the St Johnstone crossbar with McCann not quite alert enough to reach the loose ball and force it home.

Rigden again came close with a header as the ball bounced across the St Johnstone box but Cameron on this occasion was able to save and as half-time neared Gallon sent over a free kick that McGlashan couldn’t get enough of a touch on to provide the finish required.

At the other end Lauren Grant was largely untroubled although she did have one routine save from a long-range Newbigging effort.

The second half took up from pretty much where the first had ended, with Thistle on the offensive.

The half was just two minutes old when Craig cut in from the right touchline to test the home keeper with a low shot and just 60 seconds later Thistle had the third goal that they had been threatening since McCann’s 16th minute strike.

It was Teigan McCann that was again the player to provide the goal. The ball fell nicely into her path inside the St Johnstone penalty area and she made no mistake with a confident finish.

Spotting Cameron off her line McBrearty fired over head from fully 40 yards out capping an excellent performance from the Thistle wide player.

With his side four goals to the good Brian Graham took the opportunity to introduce four substitutes just prior to the hour mark but that made little difference to the direction that the game was played.

With 64 minutes on the clock Teigan McCann was unlucky to not complete an impressive hat-trick with a shot that hit the side netting with more than one person shouting ‘goal’.

Substitute Rosie Slater too was close to finding a fifth Thistle goal when she burst into the box on the left-hand side but from a tight angle she couldn’t quite squeeze the ball home.

If anything, the final score of 4-0 flattered only the home side such was Thistle’s dominance. Well marshalled in central defence by Demi Falconer and Taylor McGlashan on the rare occasions that St Johnstone came forward, the Thistle win was based round the iron-grip on midfield that the performances of Gallon and Bulloch, then Fleming when she came on, allowed Thistle.

Next up in the SWPL Cup is a tie away with Hearts with a point potentially enough to take Thistle through to the next stage of the competition should Celtic defeat St Johnstone in the other group fixture.