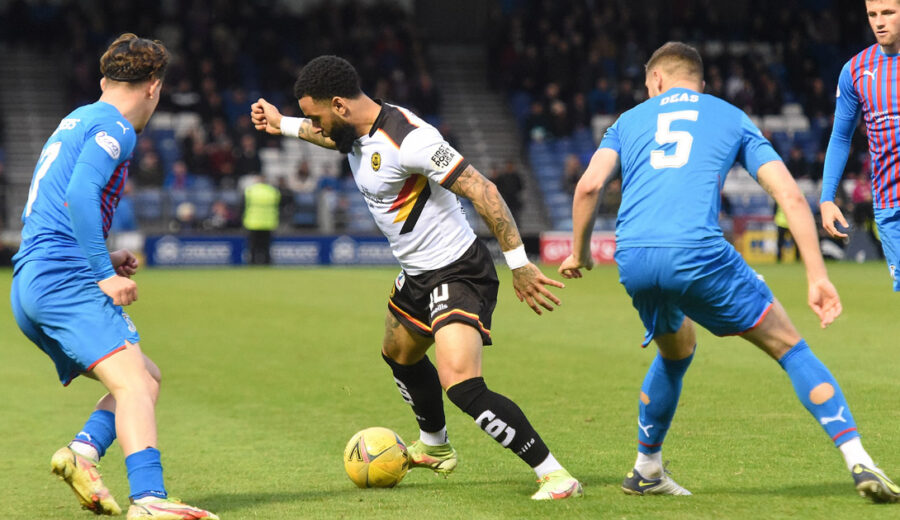 A trip to Inverness represented a win or bust situation for Partick Thistle as they looked to overturn a 2-1 first leg deficit at the Caledonian Stadium to keep their 21/22 alive.
Goals from Shane Sutherland and Austin Samuels set the Caley Jags up well after Robbie Crawford had given the Maryhill men the lead at Firhill and now Ian McCall’s side needed a win in the Highlands to give them any chance of reaching the play-off semi-finals.

The Thistle boss made two changes to the team from Tuesday night as Richard Foster and Cammy Smith replaced Ciaran McKenna and Alex Jakubiak. Also, Kyle Turner returned from injury to make the bench.

Things started in a lively manner and Inverness could have doubled their aggregate advantage within four minutes of kick-off. Richard Foster struck the ball off Logan Chalmers as he sought to clear and the number 17 raced towards the Thistle box. He tried a shot from the edge of the box but ballooned his effort over the crossbar.

Then, in the 10th minute, the away side could have struck. Scott Tiffoney cut inside from the left flank and whipped a teasing ball into the Caley box, just clearing Cammy Smith’s head. Robbie Crawford was coming in just behind Smith and got his head to the delivery though he could only direct his effort over the bar.

The game was then just settling into a regular pace when the hosts fired in the opener on the half hour mark. A slack pass from Kevin Holt was intercepted easily and fed to Austin Samuels who then charged forward. The Englishman, who netted the winner in the first leg three days prior, blasted a shot high beyond the reach of Jamie Sneddon.

A matter of moments later Thistle might have had an instant equaliser. A ball into the box was acrobatically forced goalwards by Ross Docherty and although his shot wasn’t causing Mark Ridgers any issues, it did deflect to Brian Graham who took on the snapshot. His volley rattled the crossbar before being cleared as a chance for a quick response went begging.

Ian McCall brought on Kyle Turner and Alex Jakubiak at half-time and the changes almost paid immediate dividends as the latter almost found the net seconds after the restart. Jakubiak linked up with Brian Graham in the Inverness half, eventually getting the ball on the left side of the Caley box. He tried to get his shot away with his right foot but saw his attempt deflected away for a corner.

The visitors continued to push as the second half progressed but a resolute Inverness backline denied the Jags many real chances to score as the minutes ticked away.

The game finished 1-0, officially eliminating Thistle from the cinch Premiership play-offs as Inverness progressed to face Arbroath in the semi-finals.