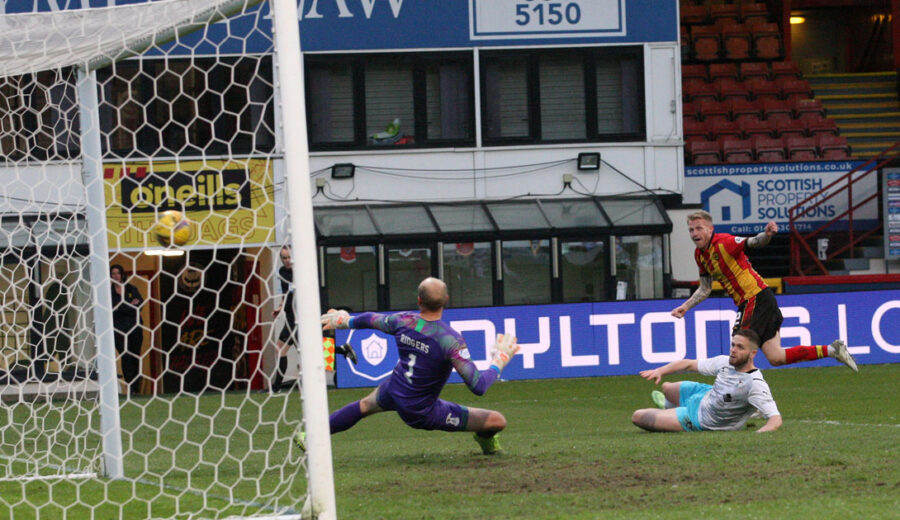 The cinch Premiership play-offs began as Inverness Caledonian Thistle travelled to Glasgow to take on Partick Thistle in the first leg of the quarter-finals. The 3rd and 4th placed teams in the Championship respectively, the two Thistles had split their regular season games with a win each and two draws.

Both sides made a slew of changes after having rotated their teams for the final game of the Championship season four days prior with Ian McCall making five alterations to the side which lost 3-1 to Ayr at Somerset Park. Kevin Holt returned to the starting line-up in place of the injured Lewis Mayo while Stephen Hendrie was back in at left-back in place of Richard Foster. Kyle Turner and Kyle McAllister, both of whom picked up knocks against Ayr, missed out on the matchday squad completely with Stuart Bannigan and Scott Tiffoney replacing them. The final change saw Brian Graham back in the first XI as Cammy Smith dropped to the bench.

The opening stages of the game were typical of a first leg in a two-legged tie with neither team willing to give up much ground to the other. The only real sight of goal in that early period came through Shane Sutherland as Caley’s top league scorer dragged a shot comfortably wide from 20 yards out.

The first save of Mark Ridgers’ game arrived in the 20th minute after Thistle had kept the ball alive after a Stephen Hendrie corner had been cleared. He ball came back out to the defender and he whipped a teasing ball into a mix of bodies near the six-yard box. Tunji Akinola swung a leg at the delivery but could only guide it into Ridgers’ grasp with the former Jags ‘stopper untroubled.

Three minutes later there was another sight of goal for the home side and it came from a Ciaran McKenna long throw. McKenna hoisted the ball into the Caley box and Ross Docherty was able to touch it on to the back post area where Scott Tiffoney was lurking. The winger acted quickly to get his shot away but he blazed it well over the bar.

Probably the best chance of the opening period arrived in first half stoppage time as Caley left-back Robbie Deas charged forward to support the attack. Sean Welsh spotted Deas and lifted a delicate ball onto the toes of the former Celtic youth player. Deas brought it down well and tried to pick out the far corner at a tight angle but his attempt skipped safely wide of the upright and out for a goalkick.

As the second half got underway, there was an increased energy about Thistle and they were nearly rewarded for that in the 51st minute. As play slowed down near the Inverness box, Stuart Bannigan gave the ball to Scott Tiffoney and the number seven fired a dangerous cross towards the Caley goal. Robbie Crawford couldn’t quite reach it but when the clearing header ricocheted off the midfielder, it fell to Brian Graham in the six-yard box. It would have been an easy finish had it not been for the alert goalkeeping of Ridgers who was at Graham’s feet almost immediately, smothering the striker’s effort.

The hosts wouldn’t be denied, however, and just two minutes on from that Ridgers stop, they had their opener. Ciaran McKenna played a lofted ball up towards the edge of the Caley Thistle box and Alex Jakubiak’s hard work forced it towards Brian Graham. The number nine spotted the brilliant run of Robbie Crawford and slotted a nice reverse pass into his path. The ex-Motherwell midfielder quickly got his shot away, driving it past the goalkeeper at the near post.

After the goal, Inverness gradually fought their way back into the game and had a couple of half-chances with Shane Sutherland blasting a couple of efforts into the John Lambie Stand. Sutherland didn’t give up though and he was rewarded for his endeavour in the 71st minute as he drew the away side level. It was an instinctive striker’s goal as he fed on the scraps left from Billy Mckay’s shot which Jamie Sneddon could only parry back towards the penalty spot. First to react, he got to the loose ball and fired the ball home to make it 1-1.

Six minutes later there was a golden opportunity for Ian McCall’s side to retake the lead and it fell for substitute Juan Alegria. The Colombian was pressing the Inverness defence, assisted by Brian Graham, and they were able to force a mistake as David Carson slipped when playing a back-pass to Mark Ridgers, setting up Alegria for a shot on goal. The 19-year-old tried to bend a shot into the far corner but couldn’t keep the effort down as he saw it fly over the bar and out for a goalkick.

Then, with nine minutes to play, it was the visitors’ turn to create a big chance and, unlike Thistle, they took it. A slack Ross Docherty pass gave the Caley Jags possession in the home side’s half and it was swiftly worked out to Shane Sutherland on the right flank. He spotted the run of Austin Samuels and put the ball on a plate for the Englishman who guided the ball past Jamie Sneddon from close range.

That goal proved to be the final clear opportunity of the game as Inverness left Maryhill with an aggregate lead heading into the quarter-final second leg at the Caledonian Stadium this Friday. That game in a 7:45pm kick-off in the Highlands.