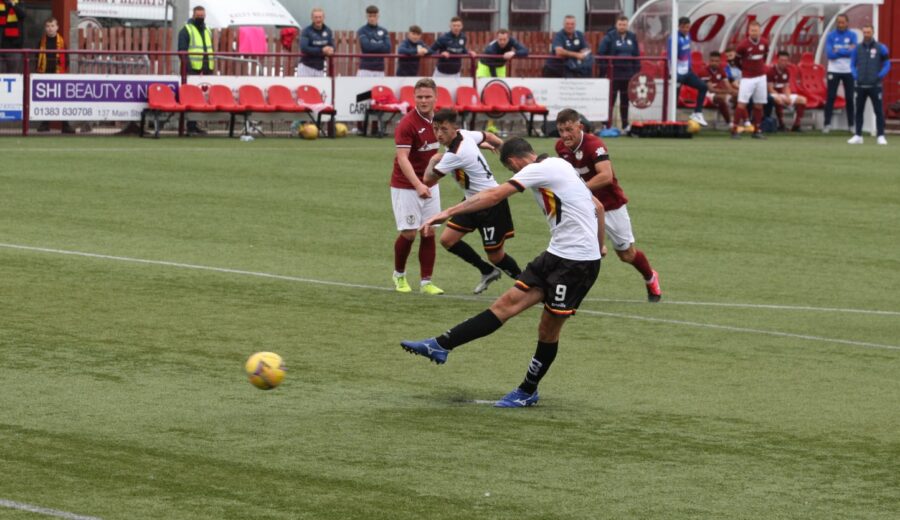 Just short of two months on from the end of their title-winning League One campaign, Partick Thistle got their 2021/22 pre-season friendly schedule underway against Kelty Hearts this afternoon at New Central Park.

Taking on Kevin Thomson’s SPFL new-boys, Thistle set out with both of their brand new signings in the first XI as Kevin Holt lined up in defence and Kyle Turner started in the midfield. Steven Bell and Ross MacIver both also featured from the start having made their loan moves permanent over the summer.

Thistle carved out the first opportunity of the game as Connor Murray received the ball on the Jags’ left flank and cut in onto his right foot. He took aim from around 20 yards out and forced Darren Jamieson into a save via a deflection with the Kelty ‘stopper getting down to his left to turn the ball behind.

The two teams took turns controlling possession throughout the opening stages but it was the hosts who eventually made the breakthrough with 27 minutes gone. After the second phase of a Thistle corner was cleared, Kallum Higginbotham picked the ball up around the half way line before spreading the play out to the left hand side where Michael Tidser was advancing. The ex-Morton man took a few quick touches before picking out the bottom corner with a well-placed finish to put his side ahead.

The red and yellow response was sharp as Ian McCall’s side restored parity within four minutes of the opener. Ross Docherty lofted a ball towards Brian Graham in the Kelty box and the number nine flicked it on to Kyle Turner at the edge of the box. Thistle’s number six took a touch on his chest before rifling a half-volley into the bottom corner of the net to make it 1-1.

The home side hit the front once again in the 50th minute when Nathan Austin struck. The goal came from some good work by ex-Thistle loanee Jamie Barjonas who moved swiftly towards the Jags box before feeding the ball through to Austin. The former East Fife forward wasted no time in firing a left-footed shot past Jamie Sneddon at the near post, putting Kelty in control again.

It took the visitors a bit longer to bounce back this time around but, nevertheless, a leveller was forthcoming with an hour gone. It came through some very patient build-up play that concluded with Kyle Turner feeding Ross Docherty who in turn knocked the ball around the corner to Shea Gordon who emphatically struck the ball past Darren Jamieson.

Gordon could have had another five minutes later when Brian Graham teed him up with a square pass across the six-yard box, however, as the midfielder sought to knock the ball into the net, he got his legs tangled and wasn’t able to make proper contact.

The third did eventually come though for Thistle and it was from the penalty spot. Substitute Ciaran McKenna found Ross MacIver with a low cross and after a couple of touches, the striker was taken down by Michael Tidser with the referee in no doubt as he pointed to the spot. Brian Graham stepped up to take the spot kick and confidently scored from 12 yards, sending the goalkeeper the wrong way.

That proved to be the winner as Thistle got their pre-season fixtures underway with a win. Next up for the Maryhill men is an away friendly against East Kilbride next Saturday.