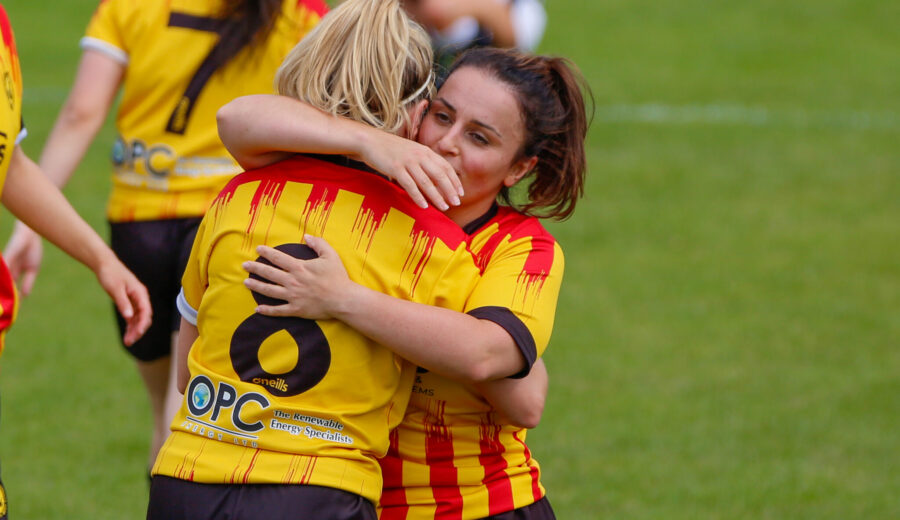 The SWPL2 promotion race will go down to the final game after Thistle’s 5-0 win over Queen’s Park took them to within a point of second place Hamilton Accies who were held to a 1-1 draw at Boroughmuir Thistle.

Brian Graham’s team selection showed four changes from the side that lost midweek at Aberdeen with Nicolle Andrews, Cheryl Rigden, Freya MacDonald and Cara McBrearty all starting against Queen’s Park.

Perhaps as a result of that midweek reverse at Aberdeen, Thistle’s start to this game; a flurry of early corners aside, was a little flat and it took them some time to find their stride, but once they did the destination of the points was never in doubt.

The game’s opening goal arrived after 17 minutes with Jade Gallon’s long-range effort finding the back of the net.

Cara McBrearty was unable to convert an excellent MacDonald cross from the right just four minutes after Gallon’s opener as Thistle looked to press home their advantage, and there was frustration just after the half hour mark when Thistle were denied a penalty despite the ball hitting a Queen’s Park hand inside the penalty box.

A second Thistle goal did, however, arrive after 34 minutes.

McBrearty was able to find Cheryl McCulloch to her left and McCulloch’s powerful drive found the back of the net.

There was a real confidence surging through the Thistle side at this point and there was no real surprise that a third goal duly followed five minutes later.

This time it was a pass from captain Colette Fleming that created the opening and Cheryl Rigden the player to convert that chance.

Two minutes later and Thistle had a fourth goal.

McCulloch did well to get a cross over from the left-hand side and McBrearty was on hand to apply the close range finish.

Thistle could even have had a fifth goal before the interval with a Taylor McGlashan, who had recovered well from a clash of heads midway through the half, clipping the top of the Queen’s Park crossbar.

Thistle would manage to add just a solitary goal after the restart but any failing to add further goals wasn’t through a lack of effort, or for a lack of chances.

The post denied Cheryl Rigden a second goal of the afternoon after she had been set up by substitute Teigan McCann before Thistle did finally have a fifth goal with 20 minutes of the match remaining.

Clare Docherty was on the end of a pin-point through ball and she took the ball round the Queen’s keeper before rolling the ball into the empty net.

Docherty was twice close to extending Thistle’s leader further, firstly with a header and then her route to goal was blocked by the legs of the Queen’s goalkeeper.

The news that Hamilton had dropped points that greeted the players at full-time means that although affairs don’t rest entirely in their own hands Thistle go into the final round of fixtures still with a chance of claiming the final promotion place. If Thistle can defeat Dundee United next Sunday and Hamilton are unable to claim three points from their fixture with Kilmarnock and it will be SWPL1 football for Thistle next season