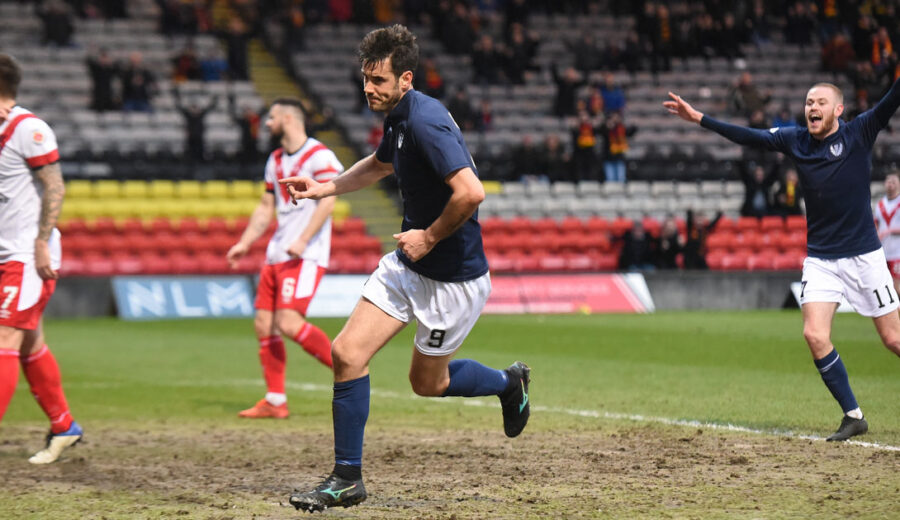 Partick Thistle continued their Scottish Cup journey as Airdrieonians visited Firhill in the fourth round of Scotland oldest cup competition.

Although from the league below the Jags, Ian Murray’s Diamonds represented a very tough tie for Thistle. Five wins in their last five games meant they came to Maryhill brimming with confidence, hopeful of causing an upset.

That hope was boosted by a very positive start from the away side as they played some nice football in the Thistle half. Little came of it, however, with their best opportunity of the opening stages being a deflected shot from the edge of the box by Adam Frizzell which was easily saved by Jamie Sneddon.

The tide began to turn after 20 minutes and it was around about that time that the hosts had their first serious effort on goal of the game. Cammy Smith was able to win the ball back in the midfield, poking it to Zak Rudden who then fed it infield to Brian Graham. The number nine then returned the ball to his strike partner Rudden but the former Falkirk man’s low shot was saved by the feet of Max Currie. The shot rebounded to Graham but he couldn’t get a shot away before a defender cleared the ball for a corner.

The Maryhill men didn’t have to wait long for their next opportunity and they didn’t pass it up at the second time of asking. A cross from Ciaran McKenna on the right-hand side ricocheted into the path of Cammy Smith in the box and the midfielder calmly squared the ball to Brian Graham who struck it home for his customary goal against Airdrieonians.

The suddenly rampant Jags could have been two in front just ahead of the half-hour mark as Scott Tiffoney nearly produced a moment of magic. The winger received the ball 10 yards inside the Diamonds’ half and instantly drove at the retreating players in red and white. He manoeuvred past one then jinked past another before unleashing a vicious shot towards goal. The power of the strike had the goalkeeper beaten, however, it was just a few inches too far to the left as it crashed back off the post.

After that positive end to the first half, Thistle were hoping to go out and put the game to bed early in the second period but that plan changed drastically in the 50th minute. A slightly loose Stuart Bannigan pass led to a 50/50 challenge between Tunji Akinola and Airdrieonians striker Jordan Allan. The Jags man seemed to get there first but, after the ball bounced behind him and Allan hit the deck, he was on the receiving end of a straight red card.

Stephen Hendrie was quickly introduced in place of Zak Rudden with Kevin Holt moving into central defence to leave space for the number 33 at left-back.

The home fans might have been expecting an onslaught from the visitors but it wasn’t forthcoming with Ian Murray’s side limited to half-chances and long shots for the most part. In fact, at times Thistle looked the more threatening side with Stephen Hendrie firing a volley just over the bar from 25 yards and Brian Graham seeing a chance smothered by Max Currie after he’d tried to bring the ball down on his chest.

With 12 minutes to go Airdrieonians finally had a clear sight of goal through substitute Calum Gallagher. A corner was flicked on to the striker who had found space at the back post but Jamie Sneddon was out in the blink of an eye to block Gallagher’s shot. The ball then fell to Rhys McCabe who tried a low shot from 25 yards, however, Ciaran McKenna was on hand to clear.

The travelling Diamonds had another chance to level things in the 85th minute as they worked the ball swiftly from left to right along the edge of the Thistle box. It ended up at the feet of Adam Frizzell on the right-hand side of the 18-yard area but the ex-Kilmarnock player couldn’t hit the target as he sought to beat Jamie Sneddon at the near post.

Airdrieonians threw everything at the Jags late on including goalkeeper Max Currie who came forward for a few corners and long throws but the home side stood firm and secured their place in the fifth round of the Scottish Cup.

The draw was made a couple of hours after the game and Thistle will play Dundee United at home in the next round. That tie is to be played on 12th February 2022 at 3pm.