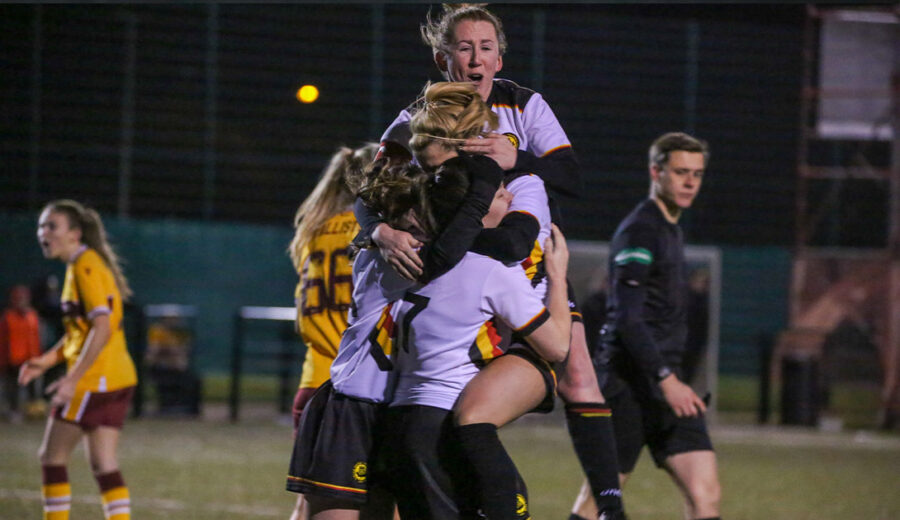 After the two teams had met on Scottish Cup duty seven days earlier at Petershill Park, Thistle and Motherwell reconvened at Alliance Park on SWPL1 duty with the two teams serving up another cracker in front of an enthusiastic crowd.

Thistle included new signing Linzi Taylor for the first time and she was quick to make an impact on her debut as Thistle made an impressive start to the game.

As early as the very first minute Taylor whipped over an excellent cross from wide on the Thistle left that Ramsay in the Motherwell goal was able to get to ahead of the lurking MacDonald.

Taylor was again involved a short time later finding McBrearty in space who in turn fed the ball to Docherty who saw her effort blocked by a defender.

This was already shaping up as an extremely open game, and at the other end it took a good block from Murphy to deny Pollard a glimpse of goal.

The left foot of McBrearty is always a threat at set pieces and after 16 minutes Falconer, up from her defensive beat, was able to get a touch to a McBrearty free kick on the left but couldn’t divert the ball towards goal.

Four minutes later though Thistle were in front and it was that Cara McBrearty left foot that provided the goal.

McBrearty herself was fouled a few yards outside the Motherwell box and she sent the resultant free kick high over the Motherwell wall and into the net leaving Ramsay grasping at air.

It was an advantage that Thistle would hold for just 8 minutes.

It would be churlish not to acknowledge the quality of the finish provided by Anderson who sent a shot high past McGregor after the ball had been touched back to her at the right hand corner of the Thistle box.

Another McBrearty free kick just past the half hour mark offered the prospect of another spectacular goal but this time the free kick was thundered straight at Ramsay when a yard or so either side would have had her struggling.

Thistle were close again to regaining the lead after 33 minutes. Taylor was able to connect with McBrearty’s corner from the right with McGowan unable in turn to direct her header on target.

Despite that Thistle pressure Motherwell were close to nudging themselves in front at half-time neared. Firstly Boyce lifted a shot over McGregor’s crossbar and right on half-time Crichton tried to catch McGregor out with a free kick but McGregor was across quickly to save.

It was Motherwell that started the second half the stronger and they took the lead for the first time 8 minutes after the restart with a highly controversial goal.

Motherwell were able to profit fully after being awarded a corner in highly debatable circumstances when McDonald-Nguah hooked home after Watson had nodded the corner on.

Fleming tried a long range effort that Ramsay saved as Thistle looked to try and find a quick equaliser but the equaliser did arrive with 20 minutes of a pulsating match remaining.

The goal was a reward for Clare Docherty’s determination as she was able to bundle the ball over the line when Ramsay was unable to grab hold of a McGowan shot from the corner of the box.

Suddenly from being a goal down, Thistle had the scent of victory in their nostrils and immediately after the restart they were on the attack again. Docherty won the ball in midfield and was able to find McBrearty who with two Motherwell defenders in close attention looked to be nudged to the ground for a Thistle penalty. Referee Hardie, however, felt otherwise and waved play-on although play had to be stopped for McBrearty to receive treatment.

Of the two teams it was Motherwell that would come the closest to a late winner twice striking the frame of the Thistle goal.

Firstly Inglis saw her shot come back off the bar with McGregor looking beaten before, just two minutes later, Hay saw her effort hit the outside of the post near the junction of post and crossbar.