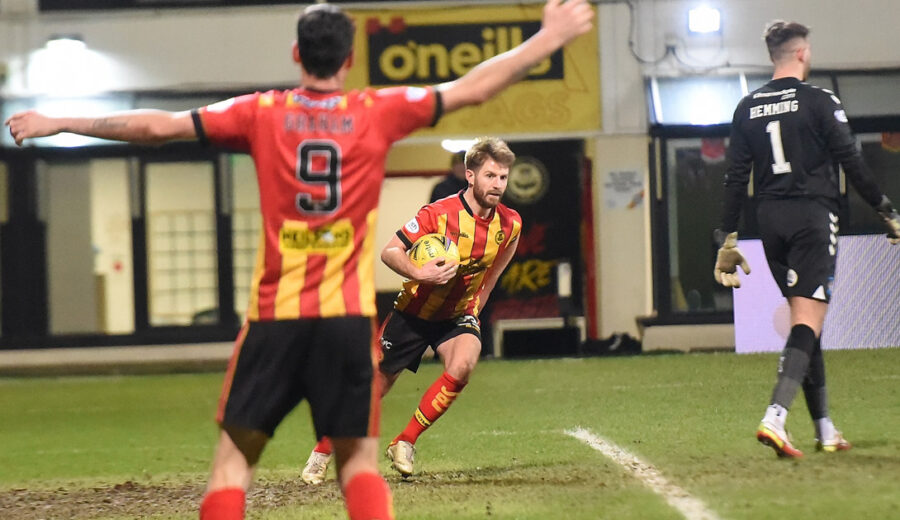 Partick Thistle turned out at Firhill for the first time of 2022 as Kilmarnock came to Glasgow for some Friday night action under the lights.

The Jags had started their new year with a 2-2 draw against Hamilton six days prior while Kilmarnock had beaten Queen of the South 2-0 the previous weekend in what was new manager Derek McInnes’ first game in charge.

Two changes were made by Ian McCall to the team which drew against Accies with Stuart Bannigan and Cammy Smith replacing Kyle Turner and Brian Graham who both took a spot on the bench.

The away side dominated the opening stages but struggled to create clear chances. The best they could muster was an effort from Oli Shaw from just inside the box after he’d escaped the attentions of Lewis Mayo but the ex-Hibernian forward didn’t get anywhere near enough power on the attempt and Jamie Sneddon simply fell on the ball.

Them all of a sudden, after 19 minutes, there was a huge chance for Killie. A pass into Callum Hendry was expertly laid off by the number 16 into the path of Blair Alston who was rushing towards the box. The midfielder moved through a huge gap in the Jags backline and tried his luck from 18 yards out. His shot was firm but central and was parried away easily by Jamie Sneddon.

Thistle first serious sight of goal came just before the hour mark as Zak Rudden and Cammy Smith played a quick one-two that got the former into the visitors’ penalty area. Unfortunately for Rudden, Kilmarnock goalkeeper Zach Hemming was out sharply to smother his finish and force it out for a corner.

Rudden had another opportunity three minutes later as Richard Foster picked the striker out with a low cross from the right wing. The number 10 tried a first time swinging strike but didn’t quite get the connection he was looking for and saw the shot trundle into Zach Hemming’s arms.

At this point, the hosts had taken control of proceeding and their improvement within the game almost paid dividends as Cammy Smith went close to an opener in the 42nd minute. Stuart Bannigan lifted an exquisite ball out to the left flank for Kevin Holt and the left-back then drilled a low ball across the box which made its way to Smith on the opposite side. He took a touch and fired a shot towards the far bottom corner but was denied by a goalmouth clearance from Brandon Haunstrup.

Killie improved at the start of the second half and probably should have had the opener 11 minutes after the restart. After Callum Hendry slipped on the ball in the box it fell to Lee Hodson whose deflected shot fell to Oli Shaw. The number nine was six yards out with plenty of the goal to aim at but had his shot saved and held by a recovering Jamie Sneddon.

The away side would get their deadlock-breaking goal though and it came as the result of a contentious penalty award. Oli Shaw ran onto a ball in behind the Jags defence and tried to lift a cross into the box. The delivery was blocked by arm of Richard Foster who appeared to have his arm by his side, however, referee Nick Walsh quickly pointed to the spot.

Oli Shaw stepped up and made amends for his earlier miss by sending Jamie Sneddon the wrong way and getting his second goal in two games at Firhill this term.

Kilmarnock then began to sit in, defending their one-goal lead and even bringing on an extra centre-half in the form of Euan Murray. That tactic seemed to be working until Ross Docherty produced a moment of magic in the 88th minute. Lewis Mayo picked up the ball in the defensive half and charged forward through a gap in the Killie midfield before feeding the ball to Docherty. The Thistle skipper then took a touch before unleashing a pure strike which flew into the bottom right-hand corner of Zach Hemming’s goal.

That was how things finished as Thistle came from behind to claim a point against their adversaries from Ayrshire. Next up for the Maryhill men is a Scottish Cup clash with Airdrieonians at Firhill. That one is a 3pm kick-off on Saturday, 22nd January.