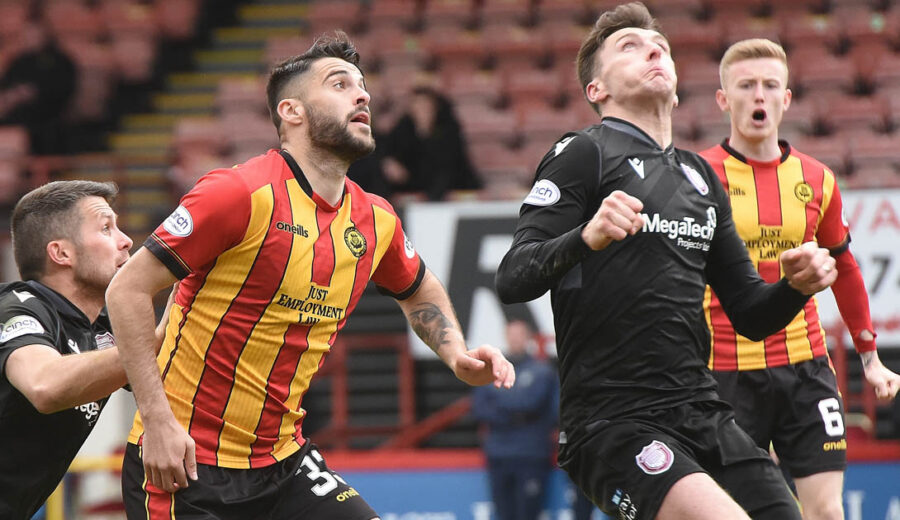 Following four defeats on the bounce, Partick Thistle welcomed Arbroath to Firhill for the second time this season as they looked to get their play-off push back on track.

The most recent of their losses was at Rugby Park against Kilmarnock as Kyle Lafferty scored twice to beat the Jags, meanwhile Arbroath were battling back from 3-1 down to get a 3-3 draw against Raith Rovers at Gayfield Park.

Ian McCall made three changes to the side which started against Killie with a couple of players returning to the squad having missed the trip to Ayrshire. Firstly, Lewis Mayo was back available after being away on international duty and he replaced Ross Docherty at the base of the Thistle midfield with the skipper absent for just the second time this league season. Brian Graham was also back, having missed three games through illness, replacing Juan Alegria up front. Cammy Smith was also recalled to the starting line-up in place of Connor Murray who dropped to the bench.

The last time the teams met Thistle found themselves behind early on but the Maryhill men started this contest in much better fashion, edging the early goings. Even so, chances were few and far between with a blocked Brian Graham shot being the best of the first half hour.

The first significant effort of the game arrived after 32 minutes when Ciaran McKenna advanced down the right flank to deliver a cross to Brian Graham at the back post. The Thistle top scorer tried to head back across goal into the bottom corner, however, Derek Gaston was able to fall on the ball to keep the scores level.

There was another headed chance for the number nine with three minutes to go of the first half with Kyle Turner the provider this time. The midfielder swung in a right-footed free kick from the left which Graham glanced towards goal. Unfortunately, his touch only helped it over the bar and onto the roof of the net.

A minute later Arbroath were inches away from an opener as first half substitute David Gold struck the post from the edge of the box. Colin Hamilton’s long throw was chested down by his namesake Jack, allowing Gold to have a first-time strike from 18 yards. The number seven’s effort seemed to be heading for the corner of Jamie Sneddon’s net but it just curled to much and rebounded off the upright before being cleared.

The home side’s aerial threat caused Arbroath more problems three minutes after the second half restart as Kevin Holt almost added to his recent Firhill goalscoring credentials. A Kyle Turner corner from in front of the tunnel area was floated in towards the number three and he ran onto it to power a header goalwards but just like Graham from Turner’s earlier delivery, Holt could only send his attempt over the bar.

Gaston was called into action for a second time on the hour mark as Brian Graham tested him with yet another header. This time it was Stephen Hendrie setting the striker up with a fantastic cross from deep on the left wing which Graham leapt to meet, powering a header towards the bottom corner. Gaston was equal to it though as he was able to push the all around the post for a corner.

The visitors’ attacking threat was severely limited for most of the second half, though there were a couple of nervy moments with ten minutes to go for Thistle. Firstly, a mix-up in defence gifted Arbroath the ball with a momentary numbers advantage but clever defending from Kevin Holt forced Jack Hamilton wide and the number 20 flashed a shot comfortably past the post.

Secondly, Hamilton became the creator as he teed up Luke Donnelly for volley on goal from just inside the box, but Jamie Sneddon got his bod behind the shot and collected at the second attempt.

There was to be no late drama at Firhill as the game finished goalless, a result which moved Thistle three points clear of Raith Rovers albeit with a game more played.

Up next for the Jags is a Friday night clash against Queen of the South. That one is a 7:45pm kick-off on 8th April.