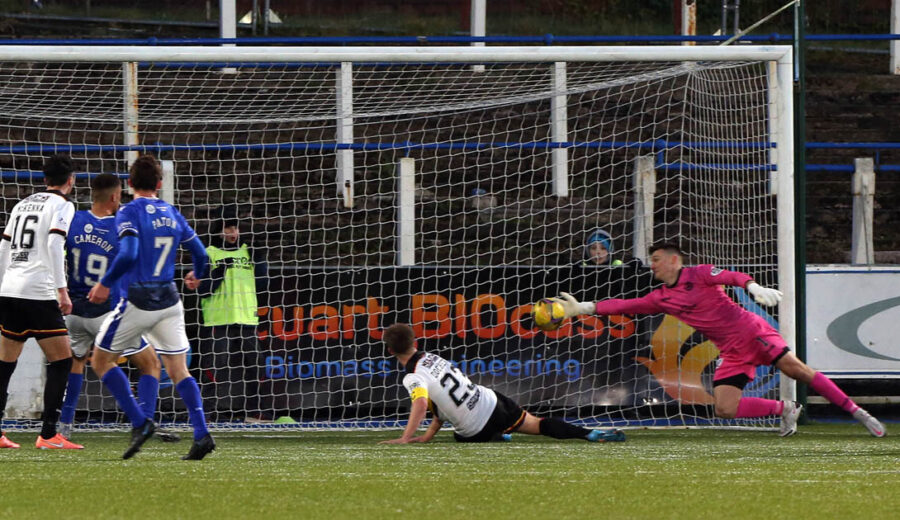 Partick Thistle were looking to put a couple of winless runs to an end this evening as they travelled to face Queen of the South in the cinch Championship. The Jags were five games without a win in the league coming into the match and also hadn’t won in their last three visits to Palmerston Park, failing to score in each of those games.

Neither team came into the contest in great form with Queen of the South matching Thistle’s streak of five games without a win, most recently in the SPFL Trust Trophy final against Raith Rovers at the Penny Cars Stadium.

There was only one change made by Ian McCall to the team which started against Arbroath at Firhill six days prior with Ross Docherty returning to the team after illness allowing Lewis Mayo to drop back into defence at the expense of Tunji Akinola who took a place on the bench. Another returning face was Alex Jakubiak who was named among the substitutes having missed the previous four games with a groin issue.

Despite the hosts being rock bottom of the division, six points adrift of ninth place, they started the game as the better side. Just two minutes in they came close to an opener as Ally Roy met a Ruari Paton cross, however, the former Jag couldn’t find the target with a glancing header.

Chances then quickly dried up for a spell as Thistle dominated the ball without creating much at all. Eventually the pendulum swung back in Queen of the South’s direction with another decent chance presenting itself in the 25th minute. A Calvin McGrory cross caused chaos in the Thistle defence as a couple of Jags failed to properly clear the low delivery. The ball fell to Ruari Paton but his snapshot was saved relatively comfortably by Jamie Sneddon.

They then had an even better opportunity with 27 minutes on the clock as another low cross spelled danger for the visitors. This time it was Ally Roy delivering the ball as he ran down the right channel before drilling a ball across the six-yard box. With Innes Cameron waiting for a tap-in, Ross Docherty had to get something on it but he could only send it towards his own goal from close range. Thankfully, Jamie Sneddon was alert to the situation and was able to claw the ball off the goal-line before Ciaran McKenna cleared.

Thistle finally threatened the Doonhamers’ goal with nine minutes left of the first half and it came through a swift passing move. Stuart Bannigan carried the ball over the half-way line and fed it into Brian Graham’s feet on the right flank. Kyle Turner made the underlapping run beyond Graham and the number nine played it into the midfielder’s path. Turner played it across the face of goal with Scott Tiffoney ready at the ack post, but Darragh O’Connor was able to produce a quite remarkable last-ditch clearance to send it safely behind for a corner from the goalmouth.

The last big chance of the first half fell three minutes before the break and it was once again for the home side. Harry Cochrane rolled a pass into Innes Cameron in the Thistle box and the former Stranraer striker tried to slot it past Jamie Sneddon into the far corner. Plenty in the ground thought it was creeping inside the post, however, it just went wide possibly via a Sneddon touch which the referee didn’t notice.

The pattern of the first half continued at the start of the second half with Queen of the South making the most of the possession they managed in the final third. A matter of seconds after the restart they were putting Ian McCall’s side under more pressure as a blocked Harry Cochrane shot fell back to Calvin McGrory in good position although the number 15 rifled a shot a few yards too high.

Wullie Gibson’s men had another guilt-edged chance to go in front 11 minutes into the second half. It was courtesy of a Ciaran McKenna clearance which ricocheted off his teammate Lewis Mayo and towards Harry Cochrane. The former Hearts player spotted Jamie Sneddon coming off his line and tried to lob the goalkeeper but his effort soared over the target.

Then, all of a sudden, after a positive start to the second period Queens found themselves behind. A Stephen Hendrie clearance went straight to Brian Graham and he laid the ball towards Scott Tiffoney who was bursting into the hosts’ half. The wideman took the ball in his stride and raced towards goal, keeping the ball away from the chasing defender Gibson. Having carried the ball 50 yards all that was left to do was finish the chance and he did that confidently with his left foot to give the Jags the lead.

That goal seemed to knock the stuffing out of the home side as after going behind their goal threat faded completely. Despite having around half an hour to respond, an Ally Roy shot from 16 yards which nearly cleared the stand behind the goal was about as close as they got.

As such, Thistle were able to pretty easily see out the win to end their winless run and secure a vital three points in the race to secure a play-off spot. Next up for them will be a massive clash with Raith Rovers at Firhill next Saturday as they take on their closest challengers for fourth spot. That one is a 3pm kick-off on 16th March.