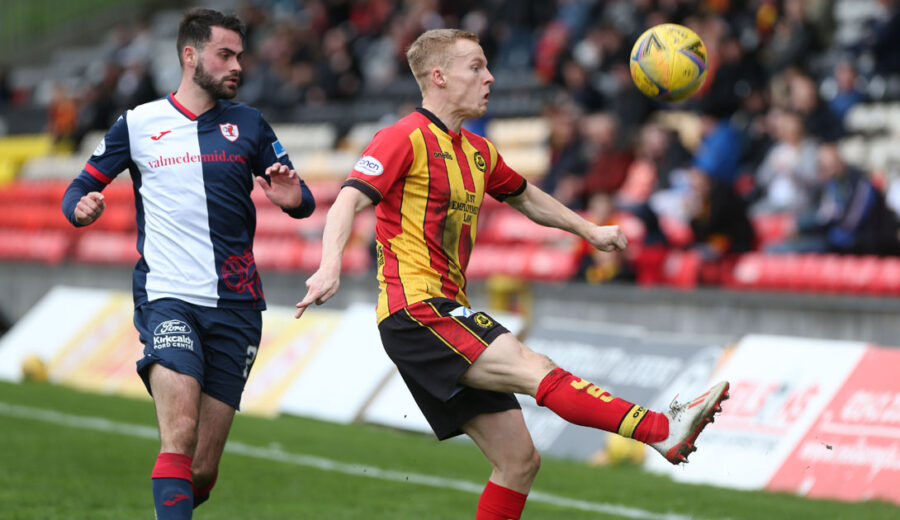 Partick Thistle were looking to secure their place in the promotion play-offs this afternoon as Raith Rovers visited Firhill. The Jags knew a win would confirm a top four finish while a draw would all but do so due to Thistle’s superior goal difference when compared to Raith’s.

Two changes were made to the side which started the 1-0 win over Queen of the South eight days prior with Tunji Akinola and Alex Jakubiak returning to the starting line-up in place of Kyle Turner and Cammy Smith. Thistle were able to name a full complement of nine substitutes with Kyle McAllister back from injury to take his place on the bench.

The first real chance of the game came after seven minutes as Sam Stanton worked the ball out the Ben Williamson on the left side of the Raith attack. The number 20 advanced towards the Thistle box before unleashing a shot which flew narrowly wide of the post, moving the side-netting as it did.

Two minutes later it was the Raith side-netting taking a beating as a Ciaran McKenna cross wasn’t properly cleared by the visitors. Sam Stanton seemed favourite to get a touch on the cross but he let it run through to Alex Jakubiak whose snapshot was only a foot or so wide of the near post.

The game then went through a bit of a lull in terms of goalmouth action with chances few and far between for both sides. Eventually the hosts carved out another opportunity with Alex Jakubiak centre to things again. The Englishman manoeuvred past Frankie Musonda to get to the by-line before firing a low cross into the danger area. The delivery took a deflection and looped up into the six-yard box where Brian Graham and Stephen Hendrie attacked it but neither man could force it over the line as Jamie MacDonald gathered the ball.

MacDonald was required again in the 41st minute as Brian Graham almost found the opener. It came from a Stephen Hendrie free-kick on the Thistle left which was swung in beautifully for the striker to attack. Graham rose well between two markers and tried to power a header into the bottom corner, however, he was denied by the Raith ‘keeper who batted the ball away from danger.

As the second half began, Raith were pushing more men forward as they looked for a goal and Jamie Sneddon had to be on his toes to deny them one six minutes after the restart. Rovers right-back Reghan Tumilty came forward from defence and took the opportunity to rifle a shot goalwards. His effort was powerful and full of movement but Sneddon got a hand to it to touch it over the bar.

The Thistle goal was under threat again in the 70th minute as a deflection almost caused havoc for the home side. Sam Stanton took on the shot from 20 yards and it took a nick off a Jags defender before bouncing towards Dario Zanatta. The number 11 tried to control the ball but saw it squeeze under his boot and into the goalkeeper’s arms.

Thistle finally produced a good second half chance in the 81st minute as Juan Alegria almost netted his first goal in Jags colours. Brian Graham hooked the ball over the Raith defence for the Colombian to run onto but after holding off Musonda, Alegria volleyed his shot wide of the far post.

That miss came back to haunt Thistle as Raith found the breakthrough in the 90th minute to take all three points. From a throw-in in front of the travelling support in the Colin Weir Stand, Rovers were able to drill a low ball into the box where Matej Poplatnik was waiting. Unmarked, the Slovenian had the simple job of redirecting the ball into the back of the net to seal a win which keeps the race for fourth alive.

The away side were able to see out the remaining minutes to move within three points of their opponents with two games left to play. Up next for the Jags is a home game against Dunfermline. That one is a 3pm kick-off at Firhill on Saturday, 23rd April.