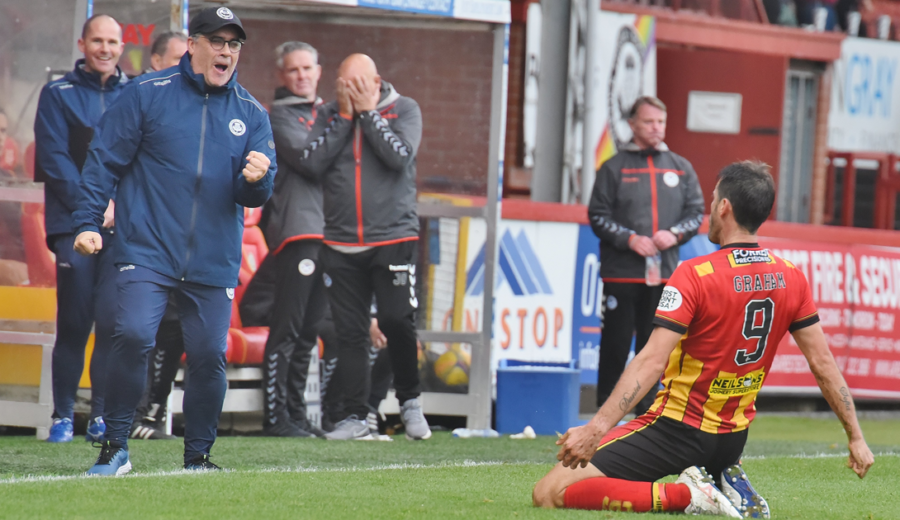 Partick Thistle and Ayr United met today in the cinch Championship as fifth faced sixth with just one point separating the two sides. The Jags were hoping to end a three-game losing streak in the league while the Honest Men were looking to give manager Jim Duffy a winning start to his permanent reign as Ayr boss.

Ian McCall made three changes to the side that lost 3-2 at Stark’s Park six days prior with Tunji Akinola coming into the defence from the start to join Lewis Mayo, Kevin Holt and Richard Foster in front of Jamie Sneddon. Ross Docherty captained the Jags against his former side with Stuart Bannigan, Scott Tiffoney and Cammy Smith joining him in the midfield. Brian Graham was the lone striker with Zak Rudden starting just behind him.

The game started with a relatively slow tempo as both teams felt their way into the contest though Thistle were on top and they were able to carve out the first chance of the match after three minutes. A free kick from the left was cleared as far as Cammy Smith on the right flank. The number 11 swiftly swung the ball back into the box where Kevin Holt met it but his header flew just wide of the target.

Ayr then had a sight of goal in the seventh minute with Tomi Adeloye getting a shot away. The number nine received the ball in the Thistle box under pressure from Tunji Akinola, however, he was able to swivel and shoot from 10 yards out. His right-footed effort was well-struck but much too high to trouble Jamie Sneddon’s goal.

The game continued without many more opportunities for either team. Michael Moffat fired a shot well wide of the target from 20 yards and Aaron Muirhead saw a curling shot from about the same distance gathered comfortably by Jamie Sneddon as the away side struggled to penetrate the Thistle backline.

From the Jags’ perspective, they were getting into good areas without finding the killer pass until they finally managed a breakthrough in the 34th minute. It was Scott Tiffoney that manuafactured the opening with a right-footed cross from the left flank that found Zak Rudden in the box. The striker was off-balance as he nodded the ball goalwards but was able to make good contact, directing the ball into the bottom left corner to put his side one up.

The hosts were able to double their lead before the break too as they showed their clinical side. Again, it was a Scott Tiffoney ball into the Ayr box which was causing problem though this time it was partially cleared by Markus Fjortoft. Brian Graham picked up the loose ball on the left side of the area before lifting a cross towards the front post where Cammy Smith was able to nod home for his first goal as a Jag.

Thistle didn’t cool off during the half-time break either with the Maryhill men coming out for the second 45 minutes looking dangerous. In the 52nd minute, a Cammy Smith corner dropped in the Thistle box where Brian Graham was lurking. The number nine tried to strike for goal but his low effort was blocked well and cleared.

Three minutes later the Jags were on the hunt for a third again as Scott Tiffoney sought to add a goal to his earlier assist. Lewis Mayo picked up the ball midway inside the Ayr half before slotting a pass sideways to TIffoney. The number seven quickly took the shot on from 25 yards but his rasping shot was turn round the post by the Ayr goalkeeper Charlie Albinson.

The third goal did eventually come in the 71st minute for Ian McCall’s side as the Jags put things to bed. Scott Tiffoney was Ayr’s tormentor-in-chief once again as his cross from the left looped into the box. Brian Graham seemed to get a slight touch on the delivery which took it onto the leg of Sean McGinty and then subsequently into the back of the net but Zak Rudden was the one who wheeled away celebrating.

The scoring was finished by Graham in the 86th minute and there was no doubt whatsoever about who this one belonged to. Stuart Bannigan fed the ball to the striker and he manoeuvred away from three Ayr players before slotting a low finish into the bottom right corner of the goal.

A richly deserved three points went the way of the hosts, taking them four clear of the Honest Men in the Championship table. Up next for Thistle is an SPFL Trust Trophy game against Queen of the South at Palmerston Park. That one is a 7:45pm kick-off next Friday, 8th October.