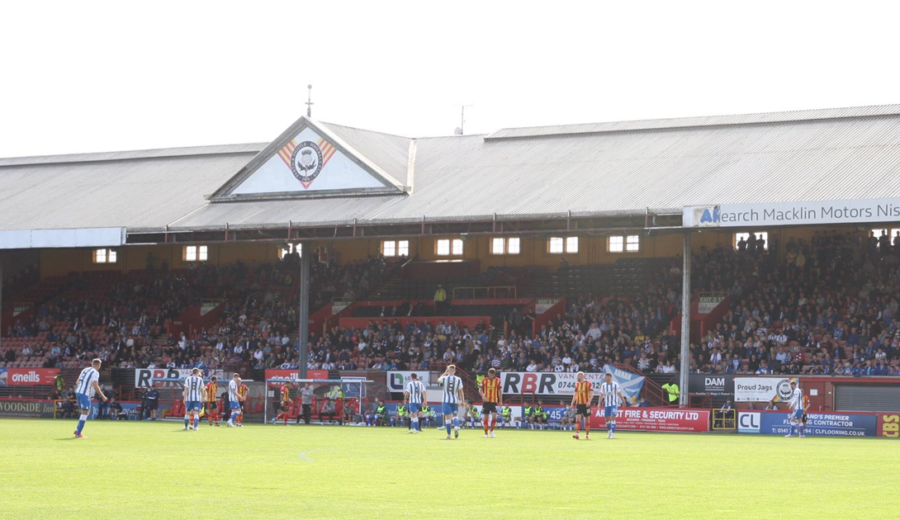 Ian McCall made two changes to the side which lost to Inverness seven days prior with Ciaran McKenna replacing Tunji Akinola at right-back while Zak Rudden came in for Cammy Smith up front. New signing Stephen Hendrie made his first appearance in a matchday squad as he took a spot on the bench.

The Jags started the better of the two teams with plenty of early possession and their vest chance of that spell came after 24 minutes. Ross Docherty lifted a ball out to Scott TIffoney on the left flank and the number seven cut past two players onto his right foot looking to beat the goalkeeper at the near post as he did at the Caledonian Stadium last time out. This time, Zach Hemming was able to get down to make the save and punch the ball away for a corner before Brian Graham could get to the rebound.

Four minutes later it was the away side going close as Jamie Sneddon was called into action for the first time. Scott Robinson did well to bring a high ball down 20 yards from goal, laying a pass into Oli Shaw’s path. The x-Ross County man then dribbled past Lewis Mayo and Kevin Holt before trying to finish past Sneddon but the Thistle ‘stopper was able to make a block with his feet and the danger was cleared.

Half-chances for Brian Graham and Fraser Murray came and went without troubling either goal and the teams went into the break with the game goalless.

Coming out for the second half, Killie started brightly and were rewarded for that start when they won a penalty in the 50th minute. Rory McKenzie picked up a second ball in the Thistle half and charged forward, feeding the ball into Scott Robinson’s feet at the edge of the box. Lewis Mayo tried to win the ball from the Killie forward but could only bring him down with Willie Collum immediately pointing to the spot.

Oli Shaw stepped up to take the spot kick with the chance to give Killie the crucial opener. He tried to find the bottom left corner but saw his effort save by Sneddon before then turning the rebound over the bar.

The euphoria of the penalty save was short-lived though as Tommy Wright’s side went in front just a couple of minutes later. Fraser Murray got the ball on the left and wasted no time in delivering a cross into the Thistle box. Scott Robinson was lurking but Richard Foster did well to get across his man to turn the ball away. Unfortunately for the number two, his clearance rebounded off the face of teammate Kevin Holt and into the back of the net.

The lead was doubled in the 65th minute as Oli Shaw made amends for his earlier miss. The goal came directly from a Zach Hemming goalkick as his ball up the park bounce over the home defence and into Shaw’s path. Killie’s number nine chested it into his own path before striking a half-volley into the top corner, leaving Jamie Sneddon with absolutely no chance this time.

The Maryhill men pushed for a goal to bring them back into the game but the visitors, who boast the joint-best defensive record in the Championship, were able to limit them to just a couple of brief sights of goal that didn’t cause Zach Hemming any serious issues.

The defeat leaves Ian McCall’s side in fourth place after six games with a trip to face Raith Rovers in Kirkcaldy up next. That game is a 3pm kick-off on Sunday, 26th September.