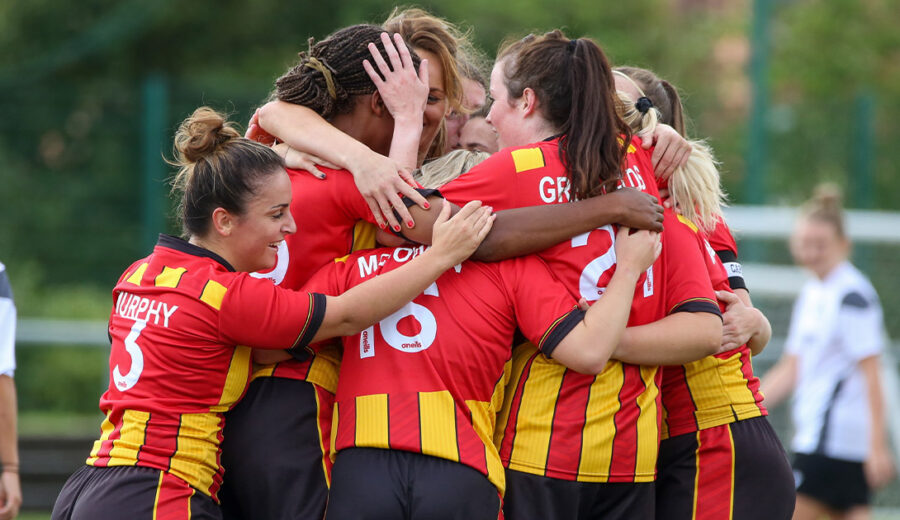 Sunday September 19th, 2021 will forever be a historic date for Partick Thistle WFC as in turning a 2-1 half-time deficit into a 3-2 victory they recorded their first every victory in the top flight of the women’s game.

Brian Graham’s team selection showed three changes from the side that went down to defeat to Aberdeen in the opening SWPL1 fixture of the season.

Jade Greenshields who appeared as a second half trialist against Aberdeen started this one having become a fully fledged Jag during the week. There were also starts for Kim Murphy and Teigan McCann.

Greenshields was able to mark the occasion of her first Thistle start with the game’s opening goal after just 10 minutes.

Thistle had started the game firmly on the front foot and had already threatened the Motherwell goal with a McBrearty free kick from wide on the right-hand side that was flighted into a dangerous area inside the Motherwell box but couldn’t find a friendly touch.

The fast paced, impressive opening received the reward it deserved with that Greenshields goal after 10 minutes.

London Pollard harried the Motherwell defence into an error and although she wasn’t able to take advantage of that herself the ball fell nicely into Greenshields path just outside the box and her powerful drive beat Ramsay all ends up.

That though was as good as the first half would get for Thistle and by the time the break came they found themselves trailing.

Motherwell were nearly level just two minutes after Thistle took the lead. A cross from the left found Hay but she was unable to direct the ball wide of Lauren McGregor in the Thistle goal.

The equaliser though would only be delayed by a further 4 minutes. Thistle were guilty of being careless with possession of the ball inside their own penalty box with the result that Watson was able to loft a cross to the back post that Gardner was able to steer home with her head.

Teigan McCann forced a saved from Ramsay after good pressing play from Pollard after 22 minutes, but it was Motherwell that edged in front after 24 minutes with McDonald-Nguah thumped home a shot from deep inside the Thistle box.

It was that goal that separated the two teams at the interval, but parity was restored just five minutes into the second half.

It was Cara McBrearty that applied the finish, neatly slipping the ball beyond the reach of Ramsay when left one on one with the Motherwell keeper.

That equaliser seemed to provide Thistle with a real injection of confidence and belief and as that confidence grew so the number of chances in front of the Motherwell goal also increased.

Seven minutes after McBrearty’s equaliser, London Pollard was presented with an excellent opportunity to fire Thistle back into the lead, but her shot was straight at Ramsay.

Just past the hour mark McBrearty spotted Ramsay off her line, and she was a little unfortunate to see her long-range effort drop just a yard or so wide of target.

It wasn’t all one-way traffic, however, and after 66 minutes a McDonald-Nguah effort just cleared the Thistle crossbar after a cleverly worked Motherwell short corner.

Thistle were looking the more likely side to score again though.

Substitute Clare Docherty, making a welcome return to the side for the first time this season after a period out injured, forced Ramsay into a save at her front post and Pollard was first to a through ball with Ramsay forced to come out her box but Pollard couldn’t find the net.

With two minutes of the 90 remaining Thistle scored the fifth, and final, goal of a thrilling afternoon of football.

Rosie Slater, a second half substitute, lifted a high ball into the Motherwell box where it found Freya MacDonald who after steadying herself fired a great shot past Ramsay and into the bottom corner of the net.

There was close on 7 minutes of injury time to endure before the final whistle was finally sounded on a famous, and well merited, victory. A victory that provides every indication that Thistle well and truly belong in SWPL1.