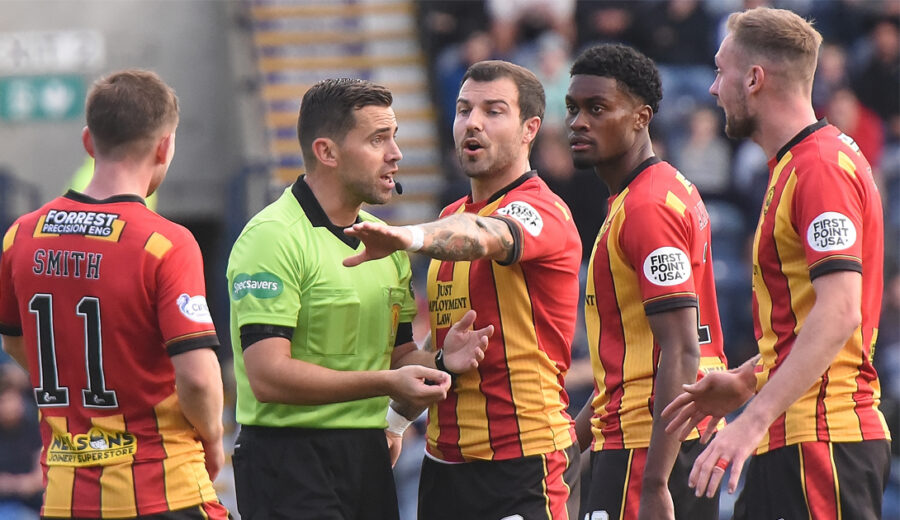 It was a rare Sunday fixture for Partick Thistle as they travelled to Fife to take on Raith Rovers in league action for the first time since 2013.

Ian McCall made just one change to the team which started the Jags’ 2-0 loss to Kilmarnock the previous weekend with Cammy Smith replacing Zak Rudden in the starting line-up.

Raith started the better of the two sides as the hosts looked to head into an early lead and Dario Zanatta had the best sight of goal in the opening stages. He was played the ball on the left-hand side of the Rovers attack before moving into the box. Eventually, he found the angle to shoot with his left foot but his effort bobbled a few yards wide of the target.

Thistle then had a chance of their own as Kyle Turner came very close to his first goal for the Maryhill men. Brian Graham touched the ball onto Turner from Richard Foster’s throw-in and the number six took aim from 20 yards. His powerful strike flew past Jamie McDonald but, unfortunately for the away side, it crashed back off the bar with the danger being cleared after some battling in the box.

Shortly thereafter, Raith thought they had the lead through Christophe Berra. In the second phase of a corner kick, Dylan Tait swung a cross into the front post area of the Thistle six-yard box. The ball ricocheted off Richard Foster and fell to Berra who tried to poke it home, however, a flailing leg from Jamie Sneddon turn the ball away with the assistant referee unmoved by the hosts’ claims that it had crossed the line.

John McGlynn’s side didn’t have to wait much longer for the opener as, from the resultant corner, former Jag Dario Zanatta put Raith ahead. The number 11 took the corner short, playing a one-two with Aidan Connolly, which allowed him to enter the box and fire a low shot into the bottom corner from 15 yards.

Thistle came back into the game after falling behind and almost grabbed a quick leveller through Ross Docherty. The Jags’ skipper received the ball 25 yards from goal, moved past his man and unleashed a forceful drive which only narrowly missed the top corner.

Brian Graham was the next player to have a chance for the visitors as Jamie McDonald was called into action for the first time in the game. Ciaran McKenna won the ball from Dylan Tait in the Raith half and, having played the ball infield, got it back on the right flank. He lifted a cross towards the back post where Graham rose to meet it, powering a header towards goal. McDonald was equal to it though and when the ball then made its way to Scott Tiffoney, his shot was deflected away for a corner.

Coming out for the second half, the home side really should have made it two as Reghan Tumilty was denied by Jamie Sneddon. Dario Zanatta was tormenting the Thistle backline again as he moved in from the right and played the ball across to Tumilty in space 10 yards from goal. The right-back set himself and shot but his high effort was turned over the bar excellently by Sneddon.

There was then some drama as the Jags saw two consecutive penalty claims waved away by referee Andrew Dallas. Firstly, a Brian Graham half-volley appeared to strike the arm of Raith defender Kyle Benedictus and then Ross Docherty went down in the box after feeling a shove in the back from Rovers midfielder Ross Matthews. Despite the complaints of the men in Red and Yellow as well as the fans in the McDermid Stand behind the goal, Dallas was unconvinced by either appeal.

Thistle’s penalty-themed frustrations were then compounded as the home side were awarded a spot kick minutes later. It was Cammy Smith who was the guilty party as Dario Zanatta’s flicked pass towards Liam Dick struck the midfielder arm. It was Rovers captain Kyle Benedictus who stepped up to take the kick and he found the bottom corner despite Jamie Sneddon diving the right way – to his left.

Raith made it three in quick order as Benedictus got his second of the afternoon. A Zanatta corner picked out Berra deep in the box and the ex-Scotland international headed it back towards the crowd of bodies in front of the Thistle goal. Ethon Varian was able to flick it on to Benedictus who slotted home into the same corner that his penalty picked out.

As the game entered its final few minutes, the Jags were given a glimmer of hope thanks to a Brian Graham goal. Kyle Turner’s corner was kept alive by Kevin Holt with Tunji Akinola first to the loose ball though the Englishman’s shot was blocked. The ball then rebounded to Brian Graham who drilled a first-time finish into the back of the net to make it 3-1.

The glimmer of hope became a bit brighter in injury time when the deficit was cut to one by Zak Rudden. A Kyle Turner free kick from just inside the Raith half fell to Rudden via a miscued clearance by Liam Dick and the number ten, who came on as a second half substitute, made no mistake in side-footing it past Jamie McDonald to set-up a nervier finish than the home side would have expected.

There was still a minute or so of injury time to be played but Thistle were unable to carve out another clear-cut opportunity meaning the game finished 3-2 to Raith, seeing the Fife side leapfrog the Maryhill men into fourth place.

Up next for Ian McCall’s side is the visit of Ayr United to Firhill on Saturday, 2nd October. Kick-off for that cinch Championship clash is 3pm.