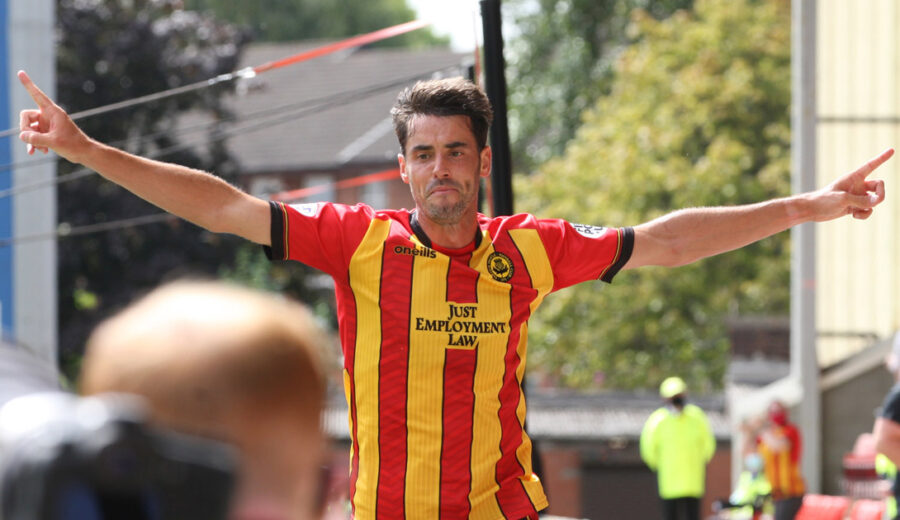 Partick Thistle got their 2021/22 cinch Championship season underway against Queen of the South this afternoon at Firhill. The Jags came into the game off the back of a 2-0 defeat to St. Mirren in their final Premier Sports Cup group stage game while the visiting Doonhamers beat Airdrieonians 4-1 in their final group fixture.

There were two changes to the side which started at the SMiSA Stadium the previous weekend. Firstly, Jamie Sneddon returned to the line-up in place of Harry Stone after the two goalkeeper’s had split the four Premier Sports Cup group games. New loan signing Lewis Mayo also came into the starting XI, replacing Ross MacIver to make his second debut for Thistle.

Following a pre-season schedule when numbers were often light for the Jags, Ian McCall was able to name a stronger bench as the league got underway. Scott Tiffoney, who was rested for the match against St. Mirren, returned to take a place on the bench and Cammy Smith came into the squad for the first time since signing for the club.

A game which began relatively slowly burst into life when Queen of the South hit the front after 10 minutes. A period on sustained possession for the away side got the ball out to the experienced Willie Gibson on the left flank. He evaded the challenge of Ross Docherty before moving away from Ciaran McKenna, onto his right foot, unleashing a powerful strike towards goal which dipped and moved, beating Jamie Sneddon to give Queens an early lead.

The setback asked an early question of the Thistle side’s character and that question was answered emphatically just five minutes after Gibson broke the deadlock. A McKenna long throw was partially cleared by the visitors but Stuart Bannigan was able to bring the ball down ten yards outside the box. He fed a low ball into Zak Rudden’s feet who then stood a cross up to the back post. Attacking it was Brian Graham who was the team’s top league scorer last season and he was able to get his 21/22 tally started by knocking the ball into the back of the net, rising above Willie Gibson to do so.

Allan Johnston’s side almost produced a quick response of their own in the 21st minute as Roberto Nditi won the ball on the half-way line. He powered forward and fed a pass through to Ally Roy in the box, however, the former Jag’s low shot was comfortably turned away by Sneddon who used his feet to make the save.

Thistle then took the lead as Brian Graham doubled his takings for the afternoon. Again, Zak Rudden was at the centre of things as the number 10 received the ball on the left wing and cut back onto his right side to deliver a cross. He picked out Ciaran McKenna on the far side of the box who saw a powerful header turned onto the post by Queens ‘keeper Joshua Rae, however, the rebound fell to Graham who poked the ball home before Rae could get a hold of it.

The Jags almost gifted Queen of the South an equaliser eight minutes into the second half when Steven Bell’s short back pass put Jamie Sneddon under pressure. The goalkeeper’s clearance was deflected and fell into the path of Ally Roy who had a near-open goal to aim at but his effort was scuffed and therefore collected by the recovering Sneddon.

Two minutes after that nervy moment, Thistle thought they’d put some daylight between them and the Doonhamers only to be denied by a delayed offside call. The ball fell to Brian Graham in the box and the number nine tried to fire goalwards but it was deflected away. Ciaran McKenna was able to keep the play alive by heading back into the centre of the box where Kyle Turner applied the finishing touch on the volley. Turner ran away celebrating what he thought was his first competitive goal for the club but, after some deliberation with his assistant, referee Greg Aitken chalked the goal off for an offside on McKenna’s part.

The away side continued to press and probe and eventually they found a leveller with just over 15 minutes left to play. After a sequence of corners, one finally paid dividends when Lee Connelly’s delivery to the front post was met by Ruari Paton. The former Stranraer man guided a wonderful header across goal into the far corner, just too high for Richard Foster to get a touch on.

The Dumfries side very nearly found a go-ahead goal with 81 minutes on the clock. Roberto Nditi stepped out of defence and drove into the Thistle half. The former Forfar defender wasn’t pressed quickly and, having caught sight of the goal, he tried a shot from 20 yards. Fortunately for the hosts, his rifled effort flew just over the bar.

Thistle then had a chance of their own to grab a winner and they were able to take theirs. A Richard Foster cross into the box was headed away as far as Stuart Bannigan who lifted the ball back into the danger area. Ciaran McKenna was able to win his aerial duel and flick the ball on to Scott Tiffoney who found himself just outside the six-yard box in space. The former Livingston man struck the ball on the volley and beat Joshua Rae with a low, powerful drive before reeling off to celebrate in front of the delirious Jags fans at the south end of the Jackie Husband Stand.

The Maryhill men saw the game out to secure their first league opening day win since 2016. Next up for them is a trip to face Dunfermline Athletic at East End Park next Saturday.