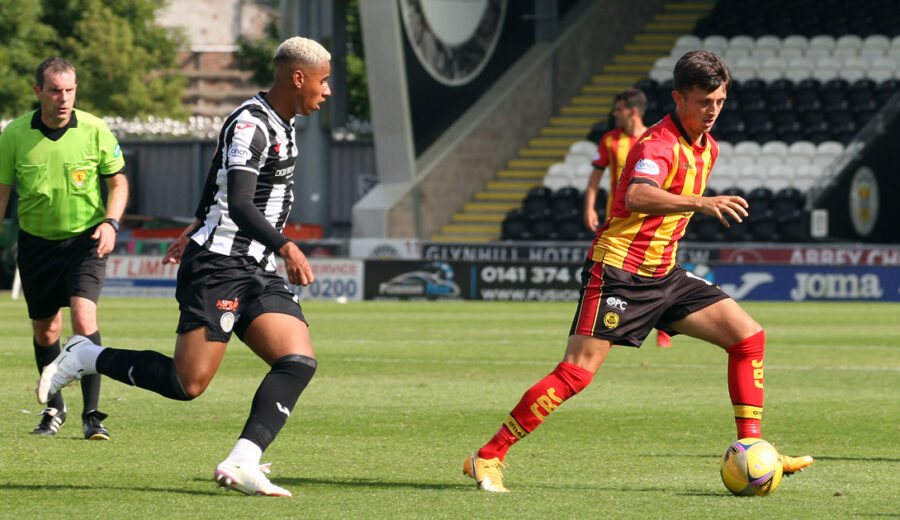 Partick Thistle went to the SMiSA Stadium this afternoon searching for an unlikely three-goal win which would take them into the Premier Sports Cup last 16 at the expense of opponents St. Mirren. The hosting Buddies knew any points at all would see them top the group, leapfrogging Dunfermline.

Three changes were made to the team which started the win over Dumbarton in midweek with the first of those being Harry Stone replacing Jamie Sneddon in goal. Steven Bell and Ross Docherty returned to the starting line-up at the expense of Mouhamed Niang who dropped to the bench and Scott Tiffoney who wasn’t in the squad whatsoever due to a knock.

Thistle started the game in positive fashion with a low Kyle Turner cross bringing a fantastic sliding clearance out from Joe Shaughnessy to deny Brian Graham a tap-in before the number nine turned provider, setting up Richard Foster who could only head wide as he made a late run at the back post.

The game then settled into a steady pace with neither team creating very much until the hosts produced the breakthrough in the form of a penalty. Jay Henderson was the man who won it, hitting the deck sharply as he tried to get away from Richard Foster and referee Alan Muir thought there was enough contact to warrant a spot kick.

Jamie McGrath stepped up and the much sought-after midfielder rolled the ball home coolly, sending the ball down the middle as Harry Stone dived to his left.

There was almost a very quick response from the away side as Jak Alnwick was called into action for the first time of the game, on the half-hour mark. Stuart Bannigan fed the ball into Brian Graham’s path as the striker burst towards the St. Mirren box and after shaking off two defenders, it looked as if he was going to restore parity. However, Jak Alnwick produced a terrific save to turn the ball away at the near post and refuse Graham his fifth goal of the season.

Thistle manufactured one more opportunity before the interval and it was Stuart Bannigan who forced Alnwick into another stop. Kyle Turner played the ball to Bannigan 20 yards from goal and with plenty of goal to aim at, Bannigan tried a left-footed effort. It was headed for the left corner of Alnwick’s goal but the former Rangers ‘stopper got a cross quickly to parry before Charles Dunne cleared it for a corner.

There was another sight of goal for the travelling Jags just after the second half restart. Kyle Turner carried the ball towards the Buddies’ box and then slotted a terrific ball into Brian Graham who had found half a yard of space ten yards from goal. He tried to fire a shot on target from a tight angle but Marcus Fraser was across well to deflect it behind.

Again, the game calmed down as it did in the first half and goalmouth action was scarce. Eventually, a chance did come and it came for the home side with 15 minutes left to play. A deep ball into the box found the head of Curtis Main who climbed above Mouhamed Niang to aim a header back across goal. It looked for all the world that the net would bulge but his attempt skipped just wide of target.

St. Mirren had a couple more half-chances before they finally got their second in injury time. Cameron MacPherson played the ball into Main who then knocked it round the corner to Lee Erwin who was on the left-hand side of the box. The ex-Leeds man then simply passed the ball across the six-yard box to the onrushing Joe Shaughnessy who tapped home from close range to seal the win.

The defeat sees Thistle knocked out of the Premier Sports Cup at the group stage for the second year in a row with St. Mirren advancing as group winners. Now, all focus for the Jags is on their cinch Championship opener against Queen of the South. That one is a 3pm kick-off next Saturday, 31st July.