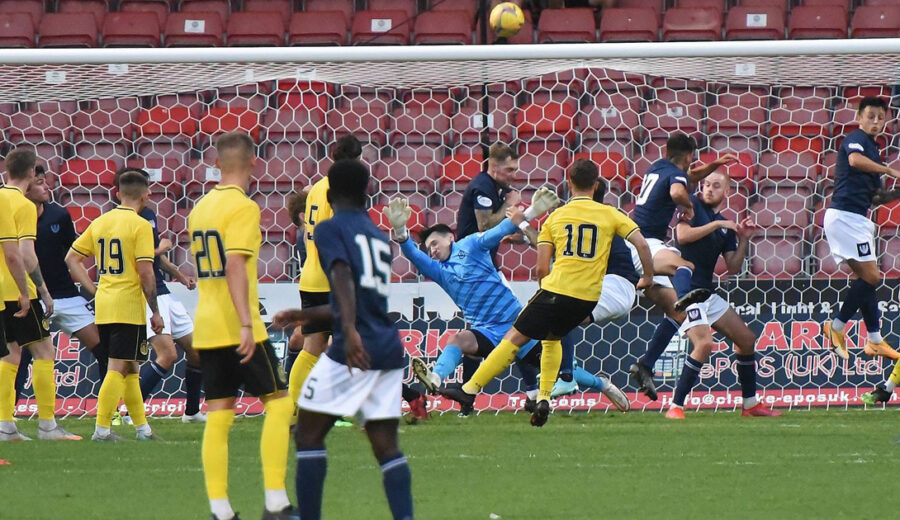 The Premier Sports Cup group stages continued for Partick Thistle with the visit of Dumbarton to Firhill. The Sons came to Maryhill without a point from their first three group matches but were welcoming back a handful of players following isolation periods.

Ian McCall made four changes to the side which beat Stenhousemuir four days prior with the first coming between the sticks as Jamie Sneddon replaced Harry Stone. Mouhamed Niang returned to the side to get his first competitive minutes of the season while Ross MacIver and Scott Tiffoney also came back into the starting line-up with Steven Bell, Ross Docherty and Connor Murray dropping to the bench.

The Jags nearly got off to the perfect start as a defensive mix-up allowed Zak Rudden to tee up Kyle Turner for a pop at goal from 20 yards, however, his left-footed shot was comfortably parried away by Sam Ramsbottom.

Ryan McGeever was the first Dumbarton player to have a sight of goal when he got on the end of Joe McKee’s corner in the 20th minute. The centre-half rose highest among a group of bodies but couldn’t direct his header underneath the bar.

Another Joe McKee corner caused the hosts problems just after the half hour mark as the ball fell the way of Gregor Buchanan in the Jags’ box. Former Morton man Buchanan tried to find the far bottom corner with a left-footed volley but Ross MacIver was perfectly positioned to clear and deny Dumbarton an opener.

Thistle created a chance from a corner kick of their own shortly thereafter as Kyle Turner picked out Kevin Holt. Again, Ramsbottom was on hand to parry but this time the rebound fell to Brian Graham, however, the number nine’s snapshot cleared the crossbar comfortably.

Finally, Thistle would get the breakthrough right on the stroke of half-time. Richard Foster won an important 50-50 on the edge of the centre circle, allowing Ciaran McKenna to get the ball to Kyle Turner on the right flank. Turner then slotted a pass through to Ross MacIver who had some space on the right side of the Dumbarton box and he used that space to pick out Brian Graham with a chipped ball to the back post. Graham simply cushioned the header back across goal into the back of the net to make it three in three games for last season’s top scorer.

And Graham would have his fourth of the season shortly after half-time. Kevin Holt played a ball forward which Graham was able to flick on to half-time substitute Connor Murray. The number 17 controlled, cut inside and then rolled a pass back into Graham’s path. The forward side-footed a low attempt into the bottom corner despite Ramsbottom getting fingertips to it, making it 2-0 to the Maryhill men.

Kevin Holt almost added a third for Ian McCall’s side after 64 minutes when Kyle Turner’s low corner was flicked on at the front post, however, despite beating the goalkeeper, Holt saw his shot cleared off the goal line.

Thistle’s clean sheet was jeopardised late in the day when Jamie Sneddon was forced to use his hands to deal with a Richard Foster backpass. What followed was a ten man Thistle rampart on the goal line as Gregor Buchanan laid the ball off for Eoghan Stokes and it was Sneddon himself who made the block, getting his face in the way of the Dumbarton man’s shot.

The game finished moments later meaning the Jags go to Sunday’s game against St. Mirren with a chance of going into the next round of the Premier Sports Cup. That game is a 15:00 kick-off from the SMiSA Stadium in Paisley.