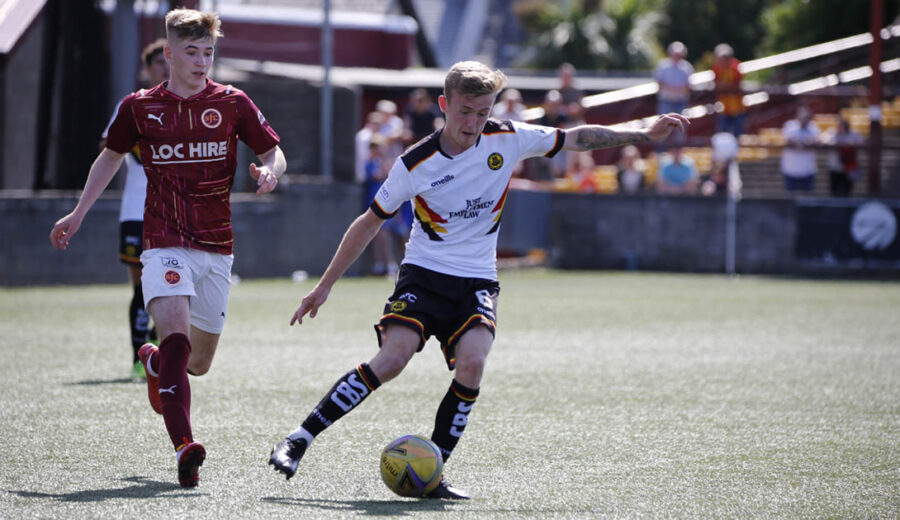 Partick Thistle contested their first away game of the new competitive season this afternoon as they faced Stenhousemuir in the Premier Sports Cup at Ochilview. The two opponents had contrasting fortunes in their group stage openers with Thistle losing 4-2 to Dunfermline whereas Stenhousemuir managed an upset on the road against Dumbarton.

There were three changes to the side which lost to the Pars seven days prior with Ciaran McKenna and Zak Rudden moving from the bench to the starting line-up while Harry Stone did likewise, replacing Jamie Sneddon in goals to make his debut as a Thistle player.

The first chance of the game came after seven minutes when Brian Graham’s high pass found Connor Murray in behind the Stenny defence. The number 17 tried to fire a volley goalwards but saw his attempt fly high over the bar.

Stenhousemuir found an opening of their own after 29 minutes as Harry Stone was called into serious action for the first time in the game. A free kick into the Jags’ box found Sean Crighton who was able to direct a header towards Cameron Graham with the 19-year-old trying a first-time shot. His effort was blocked but it fell straight to Thomas Orr who was denied well by Harry Stone who was out sharply to block at close range.

The breakthrough did come for the hosts though and, in the 32nd minute, Orr was central to it. He got the ball on the right flank and floated a ball into the danger area where Cameron Graham was primed to leap. The youngster was eased to the side by Richard Foster as he jumped and hit the deck as a consequence prompting referee Colin Steven to point to the spot. Orr was the man to step up and he confidently dispatched from 12 yards, sending the goalkeeper the wrong way.

There was a quick Jags response and Thistle almost equalised immediately through Ross Docherty. A Brian Graham shot from the edge of the box was blocked well and the rebound fell back to Docherty who then attempted a curling right-footed shot from 20 yards. His attempt looked net-bound but it ricocheted back off the post and was cleared for a throw-in.

Eventually, after some half-time changes to the personnel and shape, Thistle did draw level. It came through good play on the left flank where Brian Graham’s pass was flicked onto substitute Scott Tiffoney by Richard Foster. Tiffoney then moved into the box and picked out the waiting Zak Rudden who was unmarked four yards from goal. He had the simple task of turning the ball home to make it 1-1 just seven minutes after the second half restart.

And it took a while but the Maryhill men did eventually get the all important second goal with 73 minutes on the clock. Again Scott Tiffoney had the ball on the left wing, however, this time he turned the ball back to Richard Foster who swung a left-footed cross into the goalmouth area. Brian Graham attacked it and the number nine was able to flick a header into the corner of the net to put the Jags in front.

That’s how things ended at Ochilview with Thistle claiming their first points of the 2021/22 Premier Sports Cup group stages, coming from behind to do so. Next up it’s Dumbarton at Firhill on Tuesday – that one is a 7:45pm kick off.