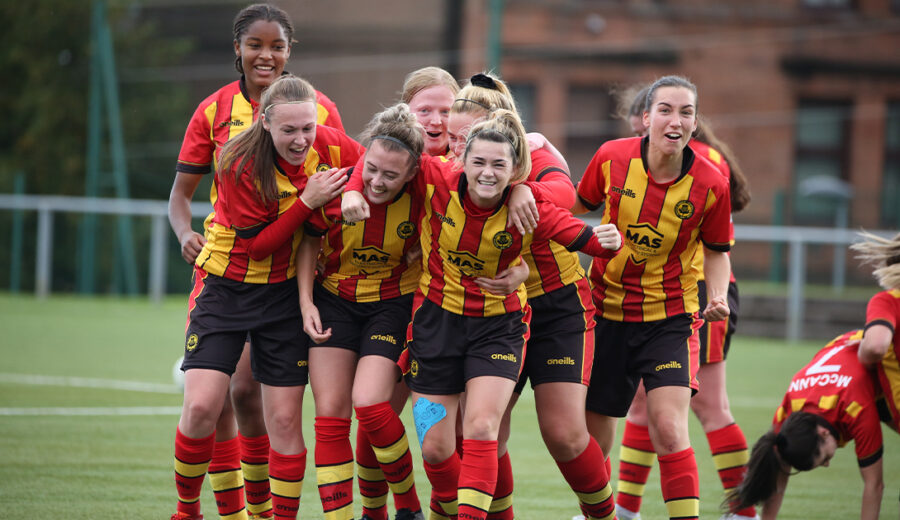 An incredibly tough run of fixtures that saw Thistle in direct opposition to each of the league’s top four in the space of just 11 physically draining days, came to an end with a visit of Hibernian to Petershill.

Thistle saved their best for last in that gruelling schedule and once the dust had settled on an outstanding game of football it showed that a five-goal thriller had finished with Thistle collecting their second win of the SWPL1 season.

Brian Graham made two changes to the side that had lost midweek to Rangers with Rosie Slater and Taylor McGlashan returning to the starting eleven.

It was would have been easy for recent results to have demoralised the Thistle players, but they started this game on the front foot and were the first of the two sides to test the opposing goalkeeper. Even though London Pollard’s effort from outside of the box required no more than a routine save from Mutch it was a positive opening from Thistle all the same.

Thistle continued with that positive approach and an excellent Cara McBrearty free kick aimed deep into the Hibs box only needed a friendly touch to nudge Thistle into an early lead.

Hibs though began to show their undoubted quality and twice inside the space of a few seconds were close to opening the scoring after 12 minutes. Firstly Danica Dalziel, continuing to deputise in goal with both Lauren McGregor and Lauren Grant out injured, stuck out a foot to deny Coyle before the same player shot over the bar from the edge of the box.

After 18 minutes though Hibs did have the lead.

A Boyle free kick found Siobhan Hunter who was able to direct her shot beyond the reach of Dalziel.

The Thistle response to the loss of that goal was a positive one.

An Amy Bulloch corner had the Hibs defence under pressure, but no Thistle player was able to force the ball home and twice a raised flag for offside halted promising Thistle moves, firstly against Clare Docherty when he she collected a Pollard pass and then against Pollard herself after she had been set up by McBrearty.

Hibs though remained a threat themselves and had they found an all important second goal before half-time the final outcome may have been very different but Dalziel, looking anything but an outfield player playing in goal, twice made important saves to prevent Hibs from securing the comfort of a two-goal lead.

The first half had been entertaining but the second 45 minutes were truly outstanding and inside 10 minutes of the restart Thistle were level.

Teigan McCann was adjudged to have been fouled just inside the Hibs box and while the decision to award a penalty may have been thought a little soft, nobody in red and yellow was complaining. Amy Bulloch certainly wasn’t complaining when she confidently sent the penalty high to the keeper’s left to tie the scores.

Twelve minutes later and Thistle were in front with a quite magnificent goal.
It started and finished with Rebecca McGowan who collected the ball in midfield, powered downfield, exchanged passes with Pollard before confidently finding the back of the net.

The game had scarcely had time to settle down when Thistle had a third goal with Amy Bulloch again the goalscorer.

Bulloch tried her luck with speculative shot from outside the box that Mutch in the Hibs goal will feel that she should have prevented from crossing the line.

Suddenly, Thistle who had trailed at the break, were two goals to the good.

A crazy spell of goalscoring though wasn’t over and just a minute after Bulloch’s goal had put Thistle two ahead that lead was halved when Colette Cavanagh was able to head a cross from the right into the net.

With a quarter of the game still to play it might have been expected that Hibs would go on and claim at least a point but having managed to get their noses in front, Thistle were in no mood to relinquish the advantage they had fought so hard to get.

There was no little amount of Hibs pressure to endure before they could claim all three points though. A Gallacher free kick almost right on the edge of the Thistle box cleared the bar and Demi Falconer had to clear from close to the Thistle goal line when it looked as if a Cavanagh shot might squeeze in at the corner.

With 7 minutes remaining Cavanagh was even closer to securing a Hibs equaliser but this time Freya MacDonald was the Thistle player to clear off the line.

It wasn’t all one-way traffic, however and with the game in injury time substitute Eleanor Smith had a glorious chance to seal the win she was set up by some outstanding link up play from Pollard, but Smith couldn’t get enough on her shot and Mutch saved.

Thistle had another couple of minutes of injury time to endure before the referee brought a thrilling encounter to a close sparking scenes of wild celebration within the Thistle ranks and who could blame them?