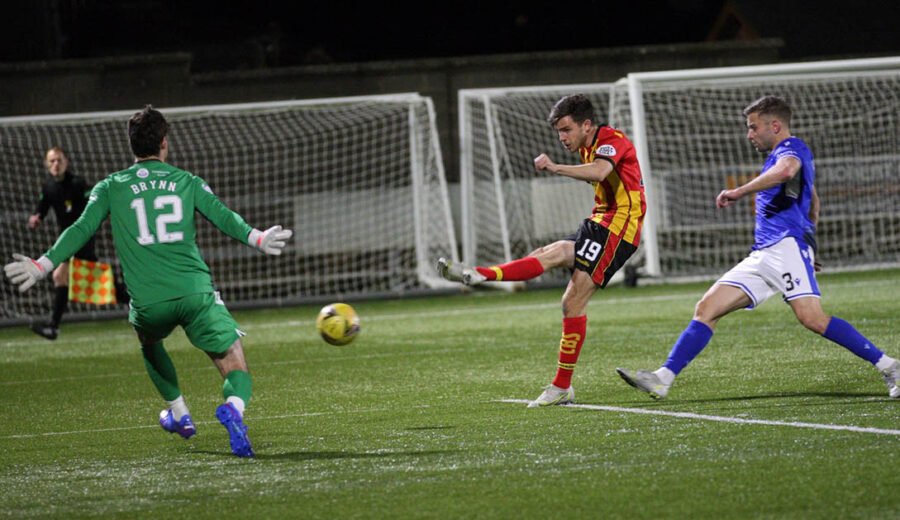 Partick Thistle’s SPFL Trust Trophy campaign for the 2021/22 season continued this evening as they faced Queen of the South at Palmerston Park. Both teams came into the tie off the back of wins with the Jags beat Ayr United 4-0 last weekend while the Doonhamers edged out Dunfermline 1-0 on the same afternoon.

Thistle manager Ian McCall made three changes to the side which routed the Honest Men with Lewis Mayo the only enforced change as the centre-half missed out due to his Scotland under-21s call-up. Richard Foster and Stuart Bannigan were the other two to drop out of the starting line-up with Ciaran McKenna, Kyle Turner and the debuting Stephen Hendrie coming into the team.

The away side started the better of the two sides and were almost rewarded for their early pressure in the eighth minute. Stephen Hendrie lifted a terrific ball over the Queen of the South defence into Scott Tiffoney’s path with the winger able to evade Josh Debayo as he entered the box. He tried to fire the ball past Sol Brynn in the Doonhamers’ goal but the on-loan Middlesbrough ‘stopper was able to block the attempt.

Hendrie was at the centre of things again for the Jags as they went close again on 26 minutes. The left-back cut in from the flank and saw things open up for him at the edge of the box. He tried to rifle a shot into the far corner but Brynn was able to get across to it. The goalkeeper wasn’t able to hold though and had to be quick to punch the ball away from the waiting Cammy Smith.

The hosts’ only real chance of the opening 45 minutes came when Ruari Paton got on the end of a cross into the centre of the box after 38 minutes but his effort was tame and central meaning Jamie Sneddon saved comfortably.

Coming out for the second half, there seemed to have been a shift in momentum as the home side took control of things and they really should have been ahead seven minutes after the restart. Once again Ruari Paton was found with a cross which this time found him at the back post. The former Stranraer man tried to cushion the ball back across goal and into the far corner but he got the angle wrong and missed the target by a couple of yards.

There was another nervy moment for the visitors four minutes later as Jamie Sneddon had to be on his toes to prevent an own goal. A low cross into the box looked set to be met by a Kevin Holt clearance but the number three sliced the ball and sent it towards the top corner of the Jags’ net. Luckily, Sneddon’s reactions were excellent and he was able to tip the ball over the bar.

The home side’s pressure eventually told when Lee Connolly struck the opener with 68 minutes on the clock. The midfielder picked up the ball in the Thistle half and sauntered forward into space before unleashing a spectacular shot from 30 yards which found the top left corner of the goal.

The goal seemed to wake Thistle up a bit with Scott Tiffoney firing a volley over the bar from a Kyle Turner corner shortly after Connolly’s opener.

Tiffoney threatened again as he drove down the left wing and drilled a dangerous ball into the Queens box with 17 minutes left to play. The ball ricocheted off Max Johnston, flashing narrowly wide of the defender’s own goal.

Substitute Ross MacIver had a great chance to level things in the 84th minute as Shea Gordon lifted a terrific ball over the opposition defence and into the striker’s path. MacIver waited for the ball to drop slightly before trying to find a way past Sol Brynn but the Queens custodian was once again able to foil the Jags.

In the end, as the Maryhill men continued their push for a goal, the Doonhamers hit on the break and sealed things with a second goal. Stephen Hendrie’s back pass towards Jamie Sneddon proved to have too little power on it and Ally Roy was the beneficiary. The former Thistle striker advanced into eh box, rounded Jamie Sneddon and slotted home into the empty net to make sure of the result and send his side into the quarter-finals at the Jags’ expense.

The game finished 2-0 with Thistle’s hopes of winning the SPFL Trust Trophy scuppered at the third round stage. Up next for the Firhill side is a trip to face Hamilton Accies next Friday night at the Fountain of Youth Stadium.