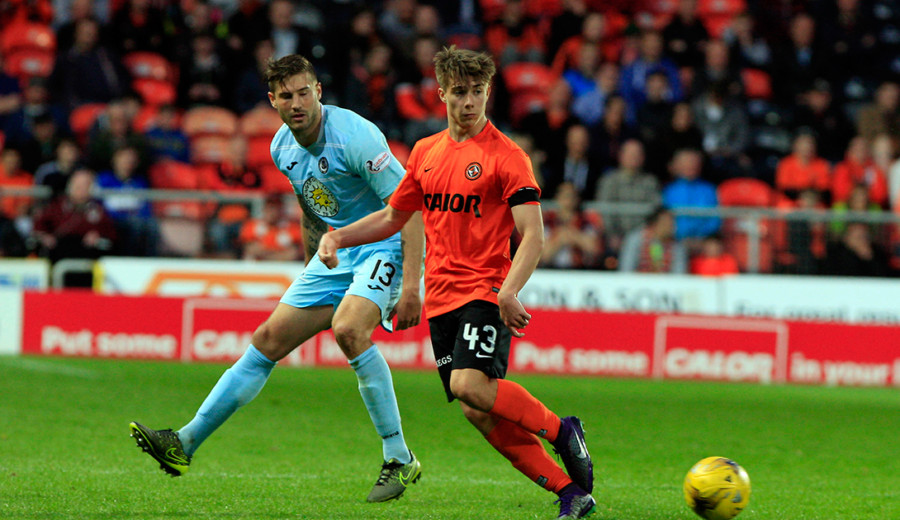 An eventful 90 minutes for Frans

It was an eventful 90 minutes for Frederic Frans last night with the Belgian defender netting the Jags opener, playing in a new position for the first time as well as scoring an own goal. All in all it added up to a game full of talking points when ptfc.co.uk caught up with him on the team bus home.

Yeah. It was a game that had a little bit of everything in it. With the own goal I didn’t see the ball coming and it’s bounced off my thigh I think. It’s a bit of bad luck that it’s bounced into the back of the net.

“It was a different position for me but I enjoyed it. I think I did pretty decent in my first time playing at right back. Of course if you get a goal after six or seven minutes then it gives you confidence. I was quite happy to play in the position.”

Thistle conceded two goals late in the game to surrender a strong 3-1 lead but Freddie couldn’t put his finger on why the Jags were unable to see out the game.

“The first ten minutes when we came out for the second half were difficult because we were two goals up and they were flying at us. I thought we contained them quite well and I thought we had the game in our hands but we didn’t manage it correctly. They were two poor goals to concede but I’ll need to see them again to be sure.”

In the other full back slot was a debutante in James Penrice and Freddie was impressed with what he saw from the 17 year old.

I think he did brilliantly. It was hard for him and he had a few one on ones but he held them. United were doubling up on him and targeting him and he didn’t show any fear or nerves for his first game. He was strong in the duel and calm on the ball so I thought he did amazing for his first start. His assist for my goal was one of the best corners I’ve seen this season to be honest!

There was no other way to conclude than to reflect on the loss of Ricky Roughan early on Wednesday morning. He was a person who had a massive impact on Freddie when he first joined the club.

“When I came to the club last year, Ricky and Chico were the two guys who gave me a great feeling about the club straight away. They are the heart and soul of the club and to have lost both of them in just over a year is a terrible feeling. He was full of the Scottish banter and he taught me a lot of Scottish words. There are so many wonderful things you can say about him. We wanted to get a victory for him today and we never managed it so we’ll have to send him off with a victory on Saturday. He’s a legend for the club and he always will be.”