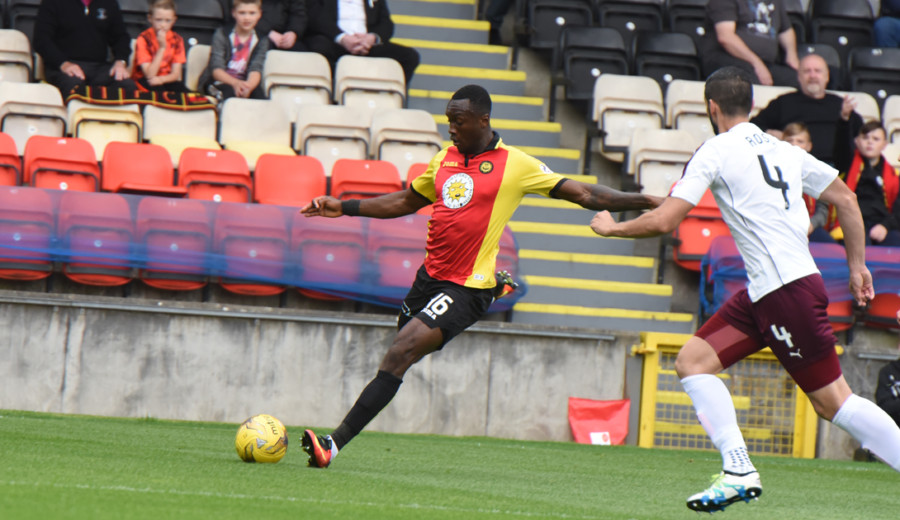 It was a gutted Ade Azeez that spoke to PTFC.co.uk after the 2-1 defeat at the hands of Hearts at Firhill.

Despite equalizing Callum Paterson’s opener through Liam Lindsay, Hearts scored a last minute winner to deny Thistle a share of the points.

“We are bitterly disappointed with the result. I thought we done enough to get the point, if not all three so to come away with nothing is hugely frustrating.

“It’s never nice losing a football match, but to lose it after such a performance and in the last minute is gutting. We put a lot of hard work into the match and I thought we caused them a lot of problems so to lose it like that was horrible.”

For the second week running Thistle have faced one of last season’s top three and come away disappointed not to have at least drawn the game. Azeez was keen to take the positives from it

“We’ve put in another good performance, that’s two weeks in a row we have played well and come away with nothing against top sides. I don’t think we’ve looked out of place against either of them and really caused them problems.

“The manager said to us after the game that we can take a lot of positives from the match. Our work rate, our desire, our attacking play were all excellent. We put in a real shift and I don’t think we deserved to lose but we have to pick ourselves up now and work harder.”

With no match next week due to the international week it gives the team a chance to recover and go again for the St Johnstone match in two weeks according to the striker.

“It’s frustrating going into the international break now on the back of a loss but we will use it to work hard, to train, work on things and recover right. We will be ready to go for St Johnstone and try and get some more points on the board.”

“I feel like I’ve done well the last few games, I’m trying to cause the defence problems and I feel like I’m doing that. I just need to get another goal on the board in the league and I’ll be happy with my start to the season. I’m getting sharper, stronger and feel like I’m improving each week.

“I’m new to the team and it takes you a while to learn everyone else’s game and for them to learn yours but we are doing that every day in training and I feel it’s starting to show with some of the runs and movement.”

Finally the Thistle sixteen had a message for the fans

“The fans were great today and they really got behind us and pushed us on. It gives you that little extra burst of energy and you are gutted for them too after losing the game like that. Hopefully we can give them more to shout about.”