At every Partick Thistle home match for the 2016/17 season, the club, together with McDonalds Maryhill, will be recognising the efforts of people in the local area who have made an impact in the community.

Each week the Community Champion will be invited, with family and friends, to the game where they will be presented with a specially-made award in front of the crowd pre-match. They will do a short interview pitch side with Firhill announcer, Gavin Wallace, before placing the match ball on a plinth for it to be carried on to the pitch for the start of the game. You will also find information on each Community Champion in the programme for the game along with a voucher for use at McDonalds Maryhill.

Saturday’s Community Champion is Elaine Johnstone. Elaine is from Balloch, near Loch Lomond, is married to Stuart and has three children Grace (9), Luke (6) and Michael (4).

Earlier this year Elaine completed the London Marathon, raising in excess of £800 for the Partick Thistle Community Trust Disability Football Programme. Elaine is a keen runner, completing her first 10k in 1998, and she was inspired to assist the Trust through her son Michael.

Michael has Cerebral Palsy and walks with the assistance of a frame, so when Elaine enrolled to run the London Marathon she felt that it would be a great opportunity to raise money for the programme. Having brought Michael along to the Community Trust’s Frame Football sessions, and having seen first hand how much he enjoyed it and how much joy the other kids got from playing – there really was only one choice.

Elaine said “Michael is still very young, but just to see him running up and down the hall and interacting with other kids was very uplifting and it inspired me to raise some money for the project, because there are not a lot of options out there for Michael and other kids with similar challenges”.

After a gruelling marathon, completed in just over four hours, Elaine has returned to running just for fun and fitness, but has not ruled out the prospect of doing another sponsored event in the future.

Elaine explained “I have been very impressed with the coaches and staff at Partick Thistle Community Trust and I would definitely consider doing something again in the future. In the meantime I would urge fans to continue to support them in order to let them keep doing the great work that they do”. 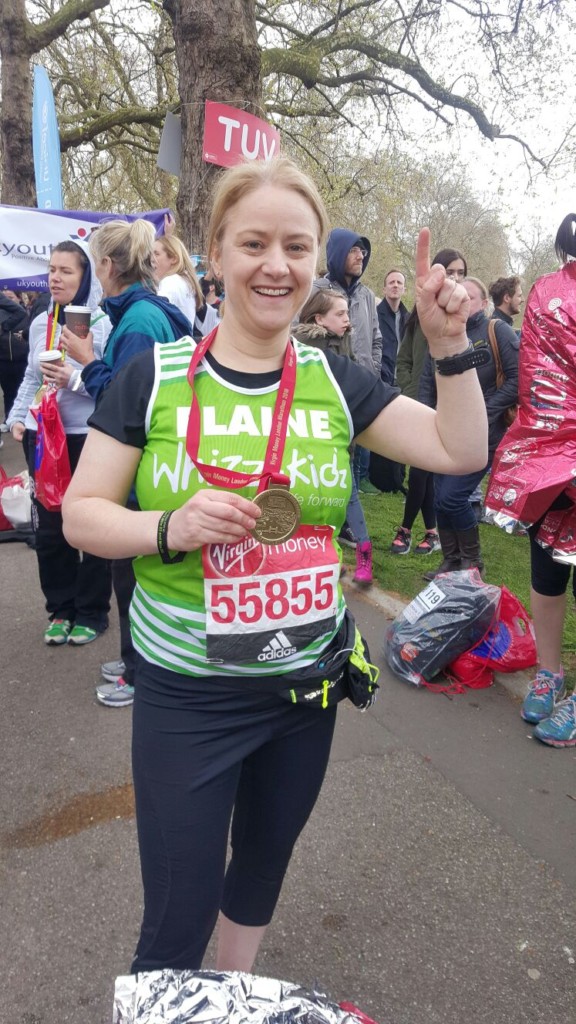 Elaine celebrating at the end of her marathon

In demonstrating such commitment and raising so much money, it’s not difficult to see why all of us at Partick Thistle – as well as our friends at McDonalds Maryhill – consider Elaine to be a real Community Champion.