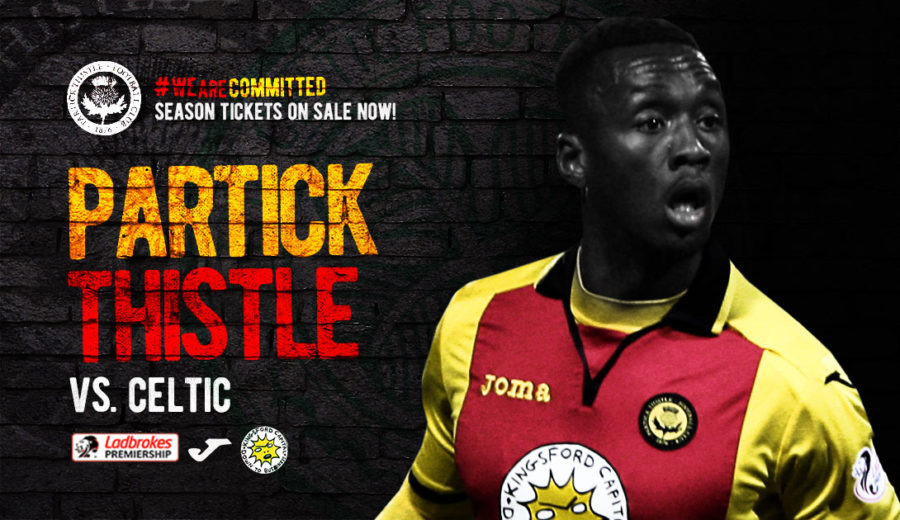 Azeez hoping to go one better

Ade Azeez was the hero the last time Thistle faced Celtic when the sides shared a 1-1 draw at Celtic Park, now the striker is hoping to go one better by ending their unbeaten season.
Azeez admits the last few results have been disappointing but knows the visit of Celtic is the type of game that will get the best from the players.
Speaking to ptfc.co.uk he said: “We are looking forward to the game. You always look forward to games like this, this is why we wanted to finish in the top six.
“We know it’s a tough game, but it’s under the floodlights at Firhill and anything can happen.
“We’ve been disappointed with the last couple of games but this is the perfect chance to go out there and showcase what we are all about. To show how good a team we are and hopefully pick up the three points.”
Celtic are still unbeaten and Ade is hoping to spoil that stat with only two games left.
“Everyone wants to be the first team to beat Celtic, it would be a big scalp to take and you want to be the ones to do that. They haven’t lost yet but we believe if we play how we know we can then we have a chance, we just have to go out and give it everything.”
Azeez feels the draw at Celtic Park will be the perfect confidence booster going into the game.
“We got the point at Celtic Park and that gives us confidence. We are one of very few teams to even do that so it just shows what we are capable of. The mood in the camp is good and the gaffer has us prepared and everyone knows what they need to do.”

Ade made himself an instant hero when he knocked the ball past Craig Gordon at Parkhead and he admits it was a special moment.
“It was great to get the goal last time out at Celtic Park, it was a great feeling and I want more of those moments.
“I got a lot of love after the game on twitter because you didn’t realise just how much it meant to the fans. To hear your name sung at games after it and then at the Player of the Year I got a great reception so it was amazing and means a lot. The fans have been great all season.”
Despite it being a tough ask the striker is still holding out hope of catching Hearts.
“We’ve got an outside chance of catching Hearts. It’s not over till the fat lady sings, we will keep fighting until the end to see if we can do that.”
Azeez has loved his first season at Firhill but knows he needs to add some more goals to his game.
“It’s been great to be involved in such a great season for the club. We had a few disappointing moments early on but we peaked at the right time and deserved our place.
“I’ve loved my first year. It’s been a strange one for me. I thought I’ve played well enough but just not managed to get enough goals. I want to repay the fans with some more goals and I’ll keep working to do that.
“I will work hard during pre-season and come back next year ready to go and hopefully I can add some more goals to my game and improve even more.”

More exclusive preview interviews with Tomas Cerny and Chris Erskine as well as Jags gaffer Alan Archibald are now available to Jagzone subscribers. Log in now to see them. Jagzone members will also be able to watch highlights of the game from midnight.

Ade has committed, will you join him? 2017/18 season tickets are now on sale.