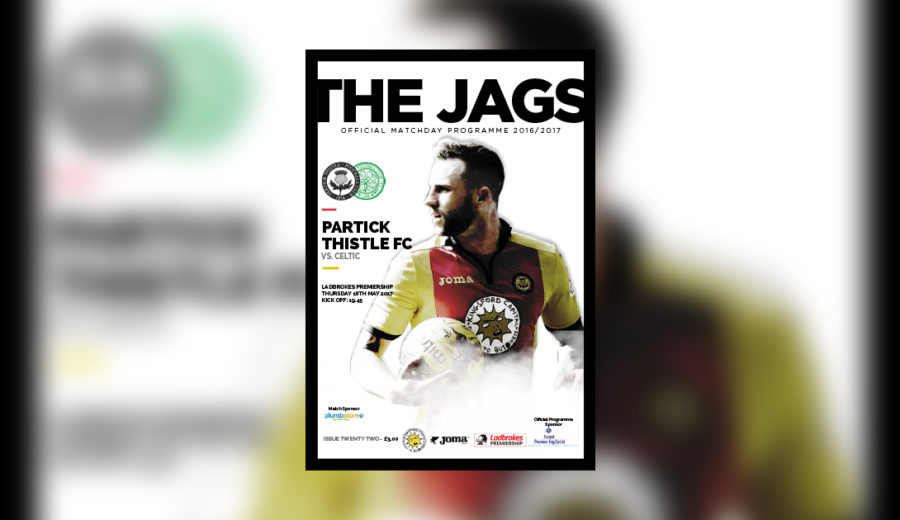 Tonight’s match programme contains an exclusive interview with Christie Elliott and he spoke to Partick Thistle media team journalist Christopher Dobie to talk about the new two year contract that the Jags number 14 has signed.

“We’re coming into that part of the season when the out-of-contract players are waiting to hear what’s going to happen. I feel like this season has probably been my best year at the club and I’ve loved every minute of it. The club is moving forward as well so I was hoping that I would be offered a deal and at the end of the day, I got an offer. I always had it in my mind that if I did get an offer then I would like to take it because I love this club. The club is growing year on year and hopefully it continues to do so.

“I’ve been here for six years and the time has flown by. I’ve loved every minute of it. Of course, we’ve had ups and downs but we have improved as a club while I’ve been at the club. I’m not too far from where I grew up, in Newcastle, and I feel like Glasgow is quite similar to Newcastle in many ways so I definitely felt at home from the start and its only gotten better. We have a brilliant group of lads here and the management staff have been excellent so I’m really enjoying my time here.”

As one of the club’s longest serving players, closing in on 200 appearances for Thistle, Christie knows plenty about how the club has evolved since he joined as a 20-year old in 2011.

“I think that even when I first joined, it was a very professional, efficient club. I didn’t know much about the club but over the years, we have been improving bit by bit and it’s all part of where we are now. The training facility is an example of the ambition that the club are showing and the players appreciate that and we can’t wait to use the centre.”

Read the full and exclusive interview with Christie Elliott ONLY in tonight’s official Matchday programme. On sale at the game.

A double page of puzzles for our Junior Jags

An update from the Thistle Weir Youth Academy

The message from the boardroom, written by Chairman David Beattie

All the latest news from around Firhill

And much, much more.

You can buy your copy online now here

A digital version of the programme is now available to all Jagzone World subscribers – log in to read it.

Christie has committed, will you join him? 2017/18 season tickets are now on sale.