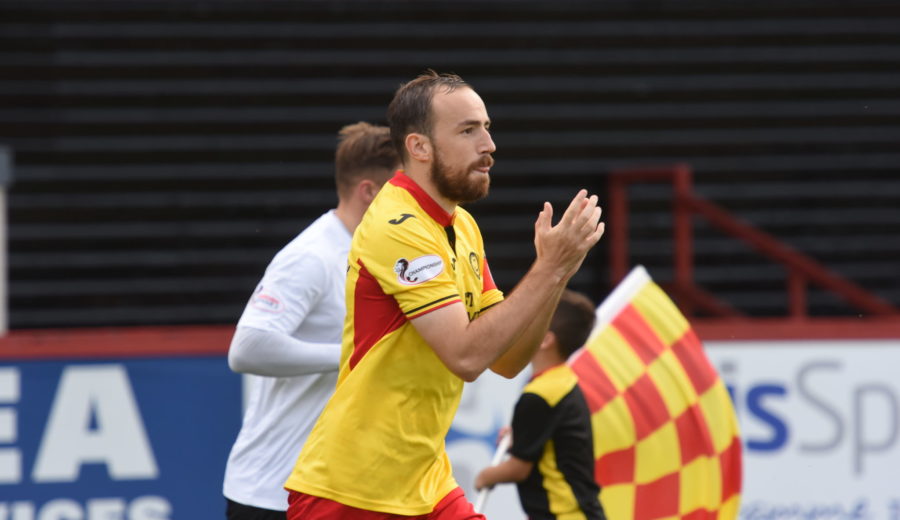 Stuart Bannigan led out the Thistle team as captain against Clyde exactly nine years since making his debut as a second half sub against the very same opposition.

It’s been a roller coster nine years for the Thistle skipper and he marked it in similar fashion with a man of the match performance and a blooper reel own goal.

Speaking to ptfc.co.uk after the 3-2 win, Bannigan was able to laugh about his second half error that made the end of the game a little more nervy.

He joked: “It’s been a great nine years and here I am marking it with an own goal.

“It’s a long time ago now but I look back fondly on that day. It was against the same team which was a funny coincidence. I think I came on with about 20 minutes to go and now we are here and I’m proudly wearing the captain’s armband.”

Stuart was happy with the team performance and win but looked back again on that mistake.

“I thought we played well tonight. We created a few chances and I thought we did well. We are pleased to get the result and it means we top the group and go through to the next round which is the most pleasing thing.

“I didn’t believe in fate before tonight. I was speaking to my mate a few days ago and own goals came up and I said I had never scored one then I go and do that tonight and he was up in the stand watching so I’m sure they’ll give me a good slagging later.

“It is what it is, an over hit back pass and it creeps in. Luckily, we got the win and go through so you can laugh about it and I’m sure I’ll be getting stick in training too over the next few days but I’ll take it.”

Banzo was happy with the Betfred group stages as a whole and felt that they’ve provided good preparation for the Championship action starting although the team knows there are still improvements that are needed.

“All the games were difficult, they were all tight games and we’ve shown good quality in them all. To top the group above a Premiership team is good going and we are pleased to have done that. We’ll wait now and see who we get in the next round.

“We have improved in performances as the games have went on and that is pleasing, we showed a winning mentality and that will be important going into the league campaign. We ground out results when we maybe weren’t at our best and you’ll have to do that at different points during the season

“We’ll watch the games back, we lost goals we shouldn’t have but that is where we look at it and learn from the mistakes. “

League action starts a week on Saturday and the Jags number 8 knows the importance of getting off to a good start.

“We’ve got a weekend off now which is good, the boys have worked really hard over pre-season so we’ll recover, and we’ll get the head down ahead of the league starting against Alloa.

More in-depth reaction with Gary Caldwell is available now to Jagzone subscribers as well as reaction from Raffa De Vita and Shea Gordon – log in now to see them.

Highlights of the match are also available free for Jagzone subscribers.