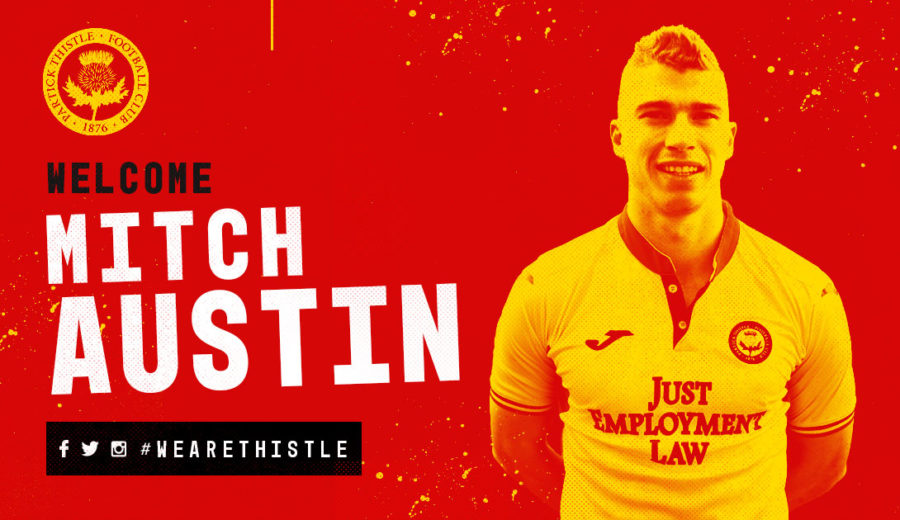 Partick Thistle can today confirm the signing of winger, Mitch Austin, on a one-year deal, subject to clearance.

Austin’s career began as a junior player with Manley United in Australia before being offered a scholarship by Rotherham United when their scouts spotted him while he was on a UK tour with Manley.

He left Rotherham in 2010 to join Stalybridge Celtic where his impressive performances earned him a move to Cambridge United. From there, he spent time on loan with three different English clubs before deciding to return to Australia in 2015, signing with the Central Coast Mariners.

A successful season with the Yellow and Navy saw him score five goals in 23 league games before moving on to the Melbourne Victory where he played 24 league games, scoring four times, however, Mitch suffered an ACL injury in November 2017 which saw him miss the majority of the 2017/18 season.

He has since had short spells with the Newcastle Jets and Sydney FC but Austin is now coming back to the UK to take his first steps into Scottish football as a Jag.

Upon signing for the club, Mitch said:

“The deal came out of nowhere really. Obviously I was in Australia playing for Sydney FC last season and basically it just came in through my agent. He has a lot of UK based connections and it just felt like a really positive move so I jumped at the opportunity. I was born in England so I have some family and friends over here and it will be nice to see them again, hopefully that will help me settle in more quickly as well.

“I think fast is how most people describe me to be honest! I’m left footed, quite tall and like to chip in with a goal or two as well. I’ve had a decent couple of seasons in the A-League and I’m looking forward to repaying the faith the manager and the club have shown in me as well as showing the supporters what I can do.

“I did play as a striker last season at Sydney but I’ve always felt that playing on the wing is my best position. I can play wide right or left but feel I can get a good ball into the box and I’m looking forward to doing that here.”