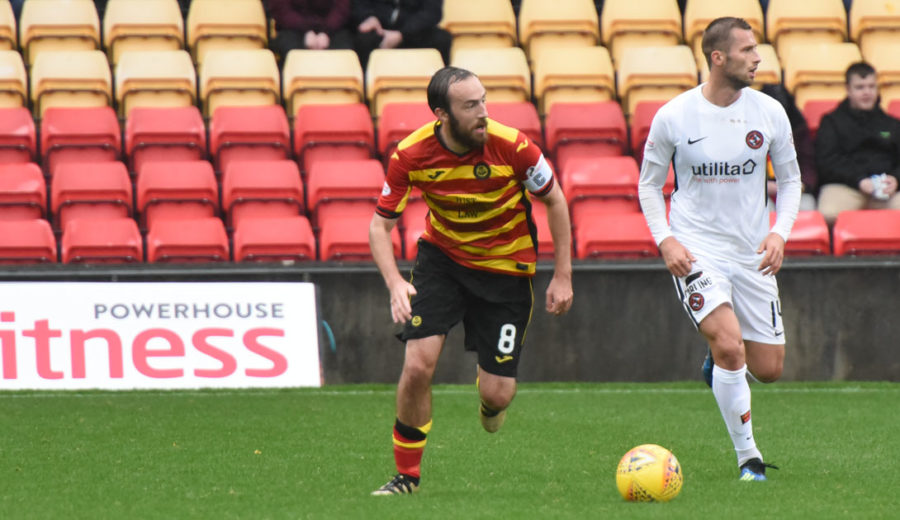 After battling back from injury to take his place in the Thistle line up again in recent weeks Stuart Bannigan topped it all off by leading the team out as captain for the first time against Dundee United.

The midfielder who has come through the Academy before making his mark on the first team was proud to have worn the arm band despite the result.

Speaking to ptfc.co.uk he said: “It was a proud moment for me. I didn’t think it would ever happen if I’m honest. I’ve come through from the under 17s all the way up so it was a real honour to lead the team out.

“There is probably going to be a new manager next week and who knows what will happen, it will probably only be for the week but it was a special moment for me today and I was incredibly proud to do it.”

Stuart spent a long time out injured and it was a tough road back, but he is delighted at where he is at right now.

“I’m delighted where I am right now after everything that has happened. After all the disappointments I’ve had in recent years I’m grateful to be out there playing again and to get the nod to be captain today was just a great way to top that off and I’m over the moon with that.”

“I’m disappointed with myself for the second goal. I always try and show for the ball and I’ve maybe got a little slackness in my game and I need to work on that and do better but I’ll always work as hard as possible and make sure I’m always available for the ball.”

“We’re disappointed with the result; I think we left it far too late to play and didn’t do enough in the first part of the game.

“We’ve got some good players, we know that. We tried to go a bit different today and maybe it took us a while to get used to that in the first half. We changed it in the second half and it helped. Jai Quitongo came on and you saw what he’s got, he was a real focal point for us, he was causing the defenders problems and got his goal.

“We will take positives from the last half hour but it’s another defeat at home and we are really disappointed in that.

“We showed a lot of fight towards the end and that was pleasing, we spoke about it after and we need to look at why we didn’t play like that during the whole match, but we’ll work on that and try and take that into next week.”

“The fans got behind us and that was great, they drove us on and they help build the tempo and we really appreciate that backing.

With the Club currently undertaking a change, we want to keep all Thistle supporters up to date. That’s why, for this weekend’s match against Dundee United, all preview and reaction videos will be free to view for every Jags fan.