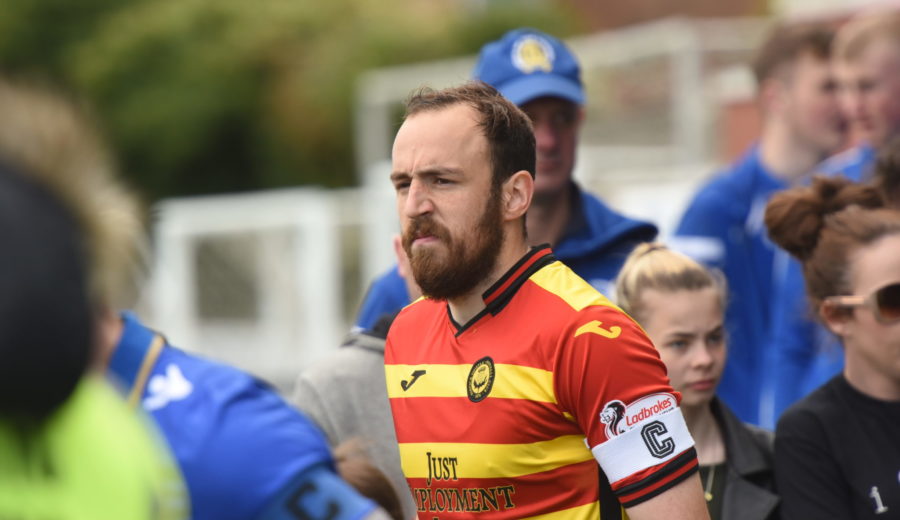 It was rather fitting that after battling injury for more than two years, it was Partick Thistle skipper, Stuart Bannigan, who netted the Jags third goal at Palmerston Park yesterday to secure the team’s Championship status and avoid the dreaded play-off spot. The midfielder has missed a lot of football since picking up a career-threatening injury during the 2015/16 season and with a number of setbacks along the way, there have been times when Stuart wondered whether he’d get the chance to play regular football ever again. Nevertheless, the spirited number eight has continued to push himself behind the scenes and earlier this season was able to successfully return to the Thistle side. That was shortly followed by being given the captain’s armband because of his endeavour, character and passion for Partick Thistle Football Club and yesterday’s match was an ideal bookend to possibly the most important season of Stuart’s career. An emotional Banzo spoke with ptfc.co.uk following the final whistle in Dumfries, starting, first and foremost, by discussing the relief of securing second tier safety:

“It’s a weight off the shoulders really. We didn’t want to be going into those play-off games scrapping to stay up for a few more games and it would have been very tough to take considering the improvement we’ve shown since the turn of the year so we’re delighted to have done it the easy way.”

Taking on Queen of the South on the road with both teams fighting for their lives, most would have expected a tight nervy affair but Thistle ended up comfortable 3-0 winners and Stuart was slightly surprised to have won the game so easily.

“That was a bit surprising for me. They didn’t put us under much pressure, certainly not in the first half and even in the second, I can only really remember Jamie Sneddon having one save to make which was a fantastic one but apart from that I don’t think he had much to do.

“We controlled the game well and kept a lot of the ball which made it tough for Queens and the two guys up top worked really hard to make sure they didn’t have a minute’s peace in defence.”

One of those men up top that Bannigan mentions was on loan striker, Lewis Mansell, who managed to bag his first goal in Jags colours today as he fired Thistle in front after 14 minutes and Stuart says that the goal came at an excellent time.

“We wanted a quick start. That’s something we’d spoken about before the game and although we knew a draw would be enough for us today, it’s a dodgy one to sit and play for the draw away from home so that early goal settled things down for us and heaped the pressure on Queens.”

The Club captain was also very pleased with the timing of the second goal which came from Mansell’s strike partner, Scott McDonald, just a minute before half-time.

“I would never have said it at the time but I think that was the goal that sealed it for us. Going into the break, it’s not a pretty goal but it gave us an extra cushion and knocked the stuffing out of Queens. It was a great cross from Blair and Scott was in the right place. He’s an excellent striker who knows how to find those positions and he earns those little bits of luck he gets.”

The third and final goal of the game was the penalty which Scott McDonald won and Stuart Bannigan dispatched. Thistle have had a few different penalty takers this season but Banzo says that he just felt confident in the moment and decided to step up.

“I was quite far away from the tackle when it happened and I thought that Scotty would have taken it after winning it but he was willing to pass it on and I was more than happy to take it.”

Then a teary-eyed Bannigan described how his celebration with the fans was a huge emotional release for him after such a tough time over the past few years.

“I was delighted with the way it went in. With everything that’s gone on recently for me, it was brilliant. All the time I’ve spent out; it was a release for me.

“For me personally, it’s been a superb season. Obviously for the Club it’s not been the season we wanted, we’ve been down the bottom of the league and it’s been a grind but for me, it’s probably been my favourite season, to come back and play; I wasn’t even sure I’d ever get playing again at some points.”

Then to finish, Bannigan looked to next season and the potential for the side to be pushing towards the right end of the table with the form shown in the second half of this season.

“I do think we can be up there next season. We have to recruit well again in this upcoming window. There are a lot of players who might not be here next year but I think we’ve got a good core of players signed up and with the right attitude I don’t see why we can’t be challenging at the top of the table.”

Further reaction from Gary Caldwell, Scott McDonald and Lewis Mansell to the weekend’s 3-0 win over Queen of the South is available to watch for JagZone subscribers – log in to see them now.