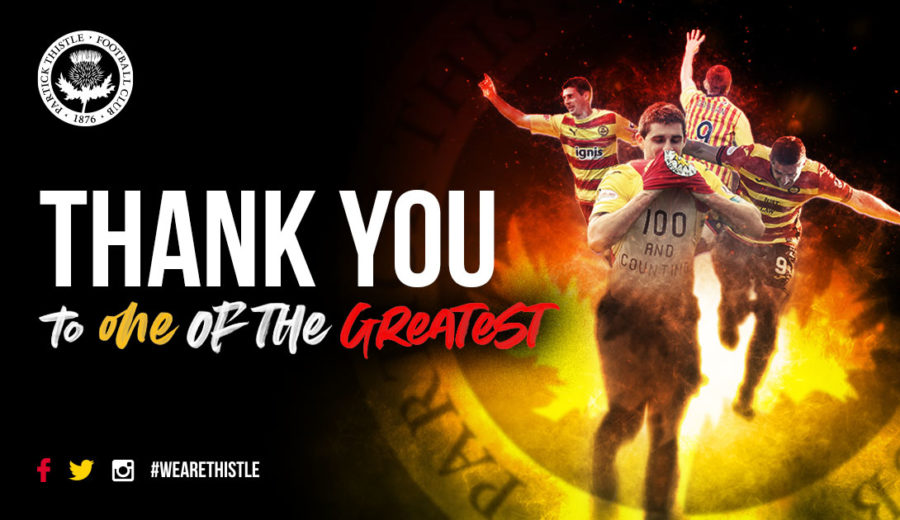 Partick Thistle can today confirm that Kris Doolan has left the Club at the end of his contract.

Since first joining from Junior side, Auchinleck Talbot, in 2009, Dools has made 401 appearances for Thistle scoring more than 120 goals in the process. A Partick Thistle Hall of Fame inductee, Kris will end his time as a Jag fourth in the all-time scoring list.

“Kris is, and always will be, a legend at Partick Thistle Football Club. Legend is an overused word but he has earned that title. The service he has given to the Club both on and off the pitch is almost unmatched.

“From his debut in red and yellow through to his first steps into coaching, Kris deserves an inordinate amount of credit and his efforts will not be forgotten.

“On behalf of everyone at Partick Thistle, I would like to put on record my sincere thanks to him for his service as a player. But I’d personally also like to thank him as a person for all he did for the Club off the pitch. Kris will always be welcome here and we wish him all the very best for the future.”

“From the first day I came into the football club, Kris has been a consummate professional and I can’t fault him. The contribution he has made to Partick Thistle will likely never again be matched and his achievements speak for themselves. He has scored some vital goals this season and he leaves with the best wishes of me and everyone at the football club.”