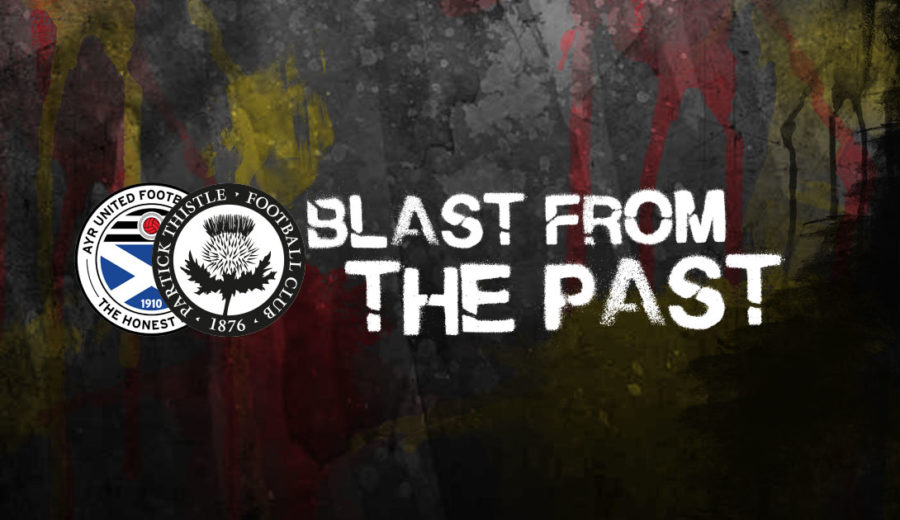 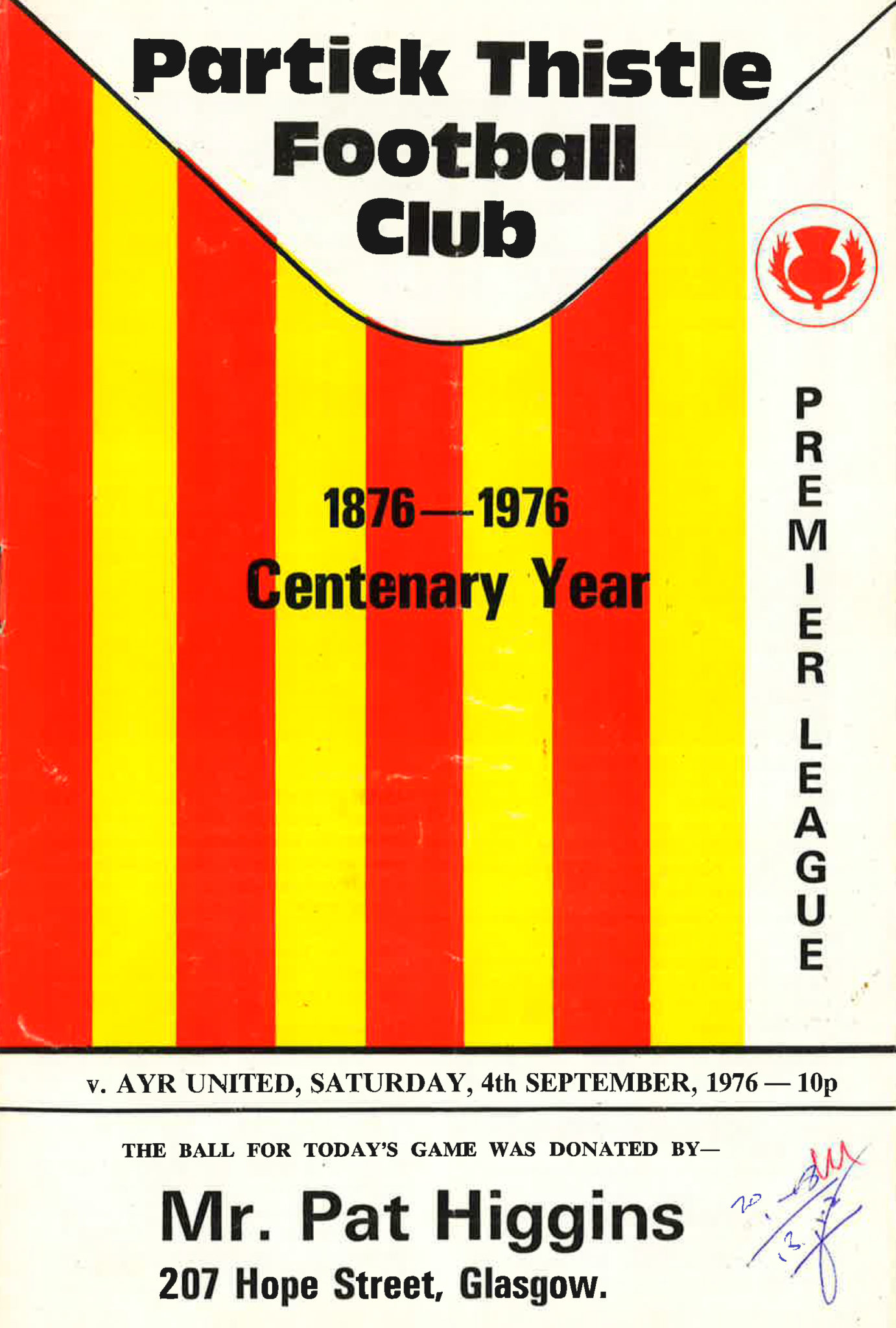 I don’t often select games which Thistle have lost, but I have picked out this one for the pure and simple reason that it was out first ever match in the Premier League, having just gained promotion from the First Division. Of course, it was a hugely disappointing result, but we quickly recovered from it and went on to finish fifth at the end of the season, and at no time since have we equalled such a lofty position. In the top four were Celtic, Rangers, Aberdeen and Dundee United, so we were in pretty distinguished company! As the programme makes adamantly clear, 1976 was our centenary year. It’s a sobering thought that 2021 is just around the corner! 100 years on from the Scottish Cup win.

So, which players had the honour of representing the club on such an auspicious occasion? In goal was the outstanding Alan Rough and the full-backs were John Hansen and the late Brian Whittaker. Then came Jackie Campbell and the elegant Alan Hansen, along with the rugged John Marr. At outside-right (an old-fashioned term nowadays) was Bobby Houston, partnered by Jim Melrose and at centre-forward was Joe Craig. The remaining players were Doug Somner and John Craig, the John Craig. On paper, we seemed to have a very strong team and yet we lost this opening fixture to a penalty-kick on the stroke of half-time and a clincher with 20 minutes to play. 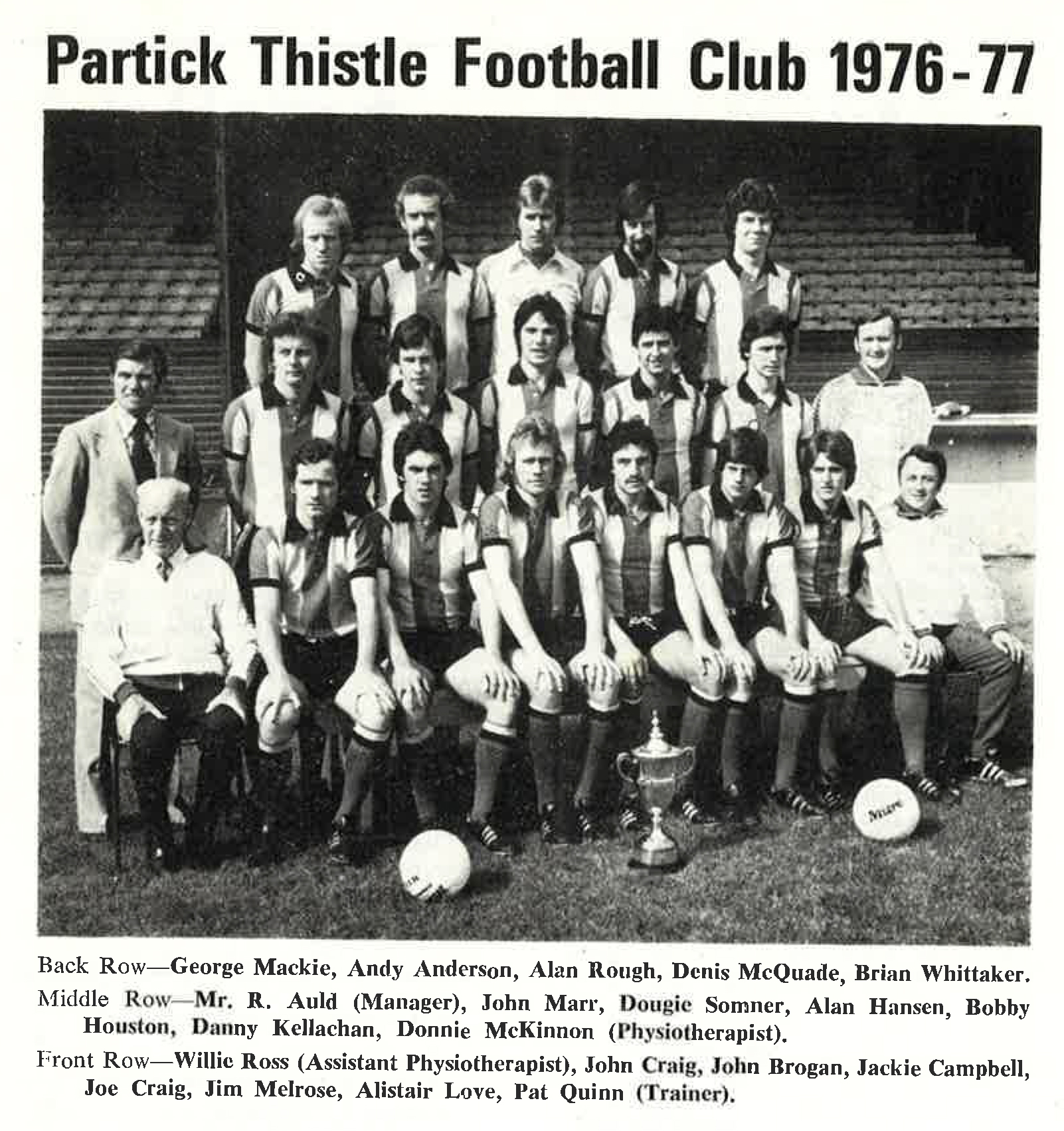 With all due respect to our visitors from Somerset Park, we would have much bigger beasts to face as the season progressed. Alarm bells were immediately ringing loud and clear, but as indicated earlier, we recovered magnificently and finished five points above our adversaries from Ayrshire.

Since 1976, Thistle have been all over the place; Premier Division, First Division, Second Division. Variety is the spice of life after all. We wouldn’t want it any other way. Who wants to win every week anyway? Well, that’s a good question, isn’t it? Don’t answer it, please. Just keep the faith.

Within the programme is a reference to Ian Archer’s book ‘the Jags’, from which I quote “Partick Thistle is Glasgow’s other football club. In the city the bitter devotion to the game is unrivalled throughout the world. The Jags inspire genteel affection. Their home, famous Firhill, is a place for the thinking man.”

So say all of us!