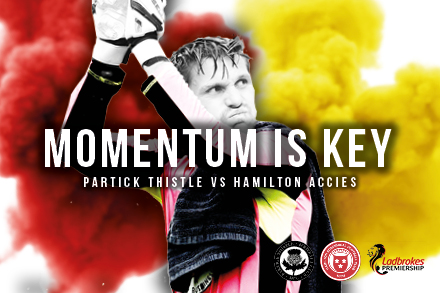 Thistle have experienced a difficult start to the season but one of the stand-out performers has been Czech goalkeeper, Tomáš Černý, and he showed this on Saturday when a couple of smart saves helped Thistle on their way to victory at McDiarmid Park. Ptfc.co.uk spoke with him ahead of Thistle’s clash with Hamilton at the weekend.

“It was very important to win the last two games because we were in a difficult situation and everyone was feeling down. Getting these two wins has given us a great lift and I hope at the weekend we can kick on from here and pick up some more points, climb up the table and keep getting better and better. We went into the dressing room at half time and we are talking about how we have to start the second half well and keep it tight, then we go out and after two minutes they score a goal. It wasn’t ideal and at 2 – 1 St. Johnstone were piling on pressure for the rest of the game. The important thing is that we were able to deal with it though and come away with three points which was important.”

On Saturday Hamilton are the visitors to Firhill and Tomas sees the fact that we are at home as a huge bonus.

“We need to make it our advantage. It is a place we are used to playing at, unlike the first game of the season against Hamilton when we were struggling a bit with the surface. After Freddie (Frans) was sent off after 20 minutes, the game was very difficult. This time we should dictate the game more and keep the possession more.”

In recent games Thistle have sourced goals from various players in various different positions. Tomas sees this as an advantage when it comes to opponents such as Hamilton.

“I think the biggest problem this season has been scoring goals. Generally I would say it is better if you are able to spread goals among more players as opposed to having one striker who scores all the goals because if he gets injured you may struggle. Last two games we have managed to score and they were different types of goals coming from different players. That should give us confidence at the weekend to score from different positions through different players.”

Cerny strongly believes that a third consecutive win could be on the cards for the Jags.

“The win is definitely possible. It is a home game and we have to forget about the last eleven games. We just need to focus on the game on Saturday and try to win it.”

Thistle’s Czech ‘keeper outlined the importance of taking the lead in the first-half like the Jags did against Dundee United and St. Johnstone.

“I think a big difference is that, in both of our wins, we managed to score in the first-half, so we are 1 – 0 up and the psychology changes completely from being at 0 – 0 for a long period of time. Scoring the first goal gives us something to hold on to and I think that has been the difference.”

Cerny was very pleased to talk about the impact of Mustapha Dumbuya who claimed the Partick Thistle’s McCrea Financial Services Player of the Month award for September in his first month at Firhill.

“He is very fast and defends very well but he can go forward as well. I must give credit to Gary who was able to step in at the last minute and score a great goal. I think Mustapha has great promise if he can continue his performances like this because he is a quality player.”

Cerny also spoke highly of Liam Lindsay. The 20 year-old centre-half has become a regular in the Jags’ back four.

“He’s done well. He’s had a couple of unfortunate moments like the sending off but at the same time he’s been solid in recent games. He’s a big, strong boy doing well and if he keeps working then I think he’s got a big future ahead of him.”