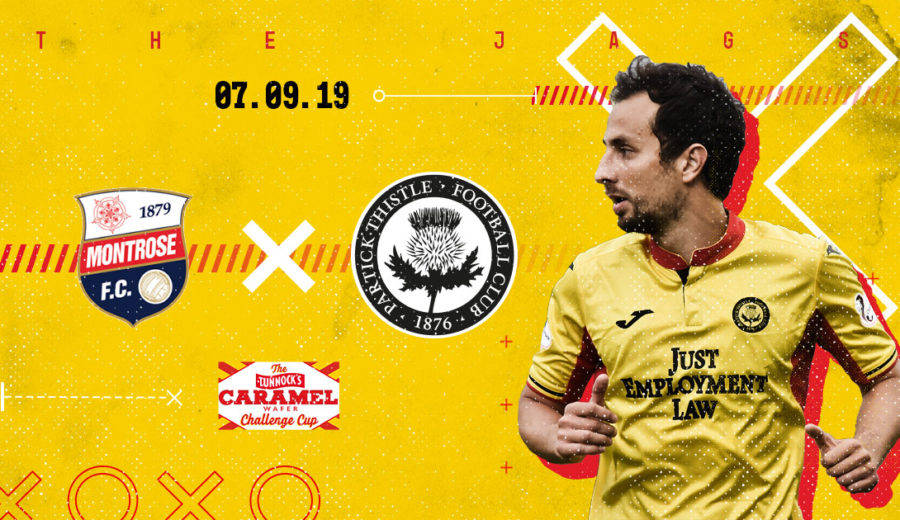 Raffa De Vita is looking forward to the chance to put the last few results behind the team when Thistle travel to Montrose in the Tunnock’s Caramel Wafer Challenge Cup. The midfielder is hoping to put things right and progress to the next round of the competition as the side take a break from league action.

Speaking exclusively to ptfc.co.uk Raffa said: “When you’re on the back of a defeat you’re always looking for that next game to come as soon as possible to try and put things right so this is a game we can’t wait for. We’re look forward to going out and hopefully putting on a performance.

“We’ve not started the league how we wanted to so we want to put some points on the board as soon as possible but this is a chance for a wee break from that and to progress in another cup after the good start to the Betfred Cup this season.

“We had the result against Ross County and we weren’t able to build on that, so I think we need to put a run of results together and Saturday gives us a chance to begin to do that.”

It is a match against League One opposition but, as Thistle have shown twice already this season by getting results against higher league opposition, it’s not always easy playing a team from a lower league.

“Every team, when they play a team ,higher than them, they go out and want to show they are good enough and prove a point, Montrose will be no different. They will be hard to beat and we have to make sure we perform properly. We will need to be at our best to win the match.”

“I think in most of the games this season we’ve had spells where we’ve played well. We’ve started the last couple but not seen it through, we’ve had a lapse in concentration or something else and we need to put together a performance for a whole game and that’s something we aim to do on Saturday.

“I think Saturday was a bit of a freak day so we have to get that out our minds and go and try and play how we can for the whole game.”

While some may think of the Tunnock’s Caramel Wafer Challenge Cup as inferior the Jags number 23 wants to go on and do as well as possible in it.

Since arriving during the summer from Livingston, the Italian is enjoying life in Red and Yellow.

“Apart from the results I’m enjoying my time here, I’m enjoying being with the lads and training has been good. We just need to get results now and hopefully I can help make that happen.

“From the outside it looks a really poor start to the season, but I really do believe it will change soon, I know the work we all put in and what we are trying to do. However, we know it’s results which matter, and we know we need to start putting points on the board.”

More exclusive preview interviews with Lewis Mansell, James Penrice and Jags manager, Gary Caldwell, will all be available to Jagzone subscribers this afternoon – log in to see them.

Can’t make it to the Energy Check Stadium at Firhill? JagzoneLIVE will bring you coverage of the full 90 minutes through our audio commentary service which begins begins at 2:45pm so join us from then.