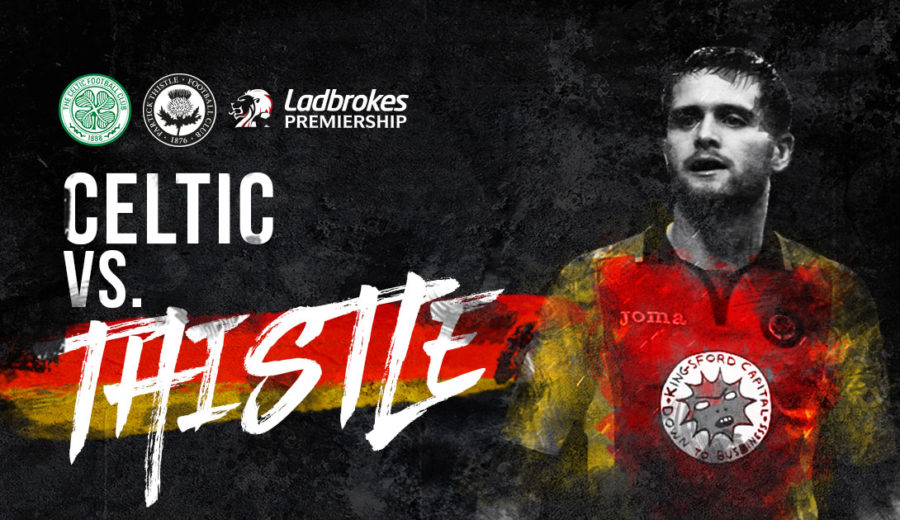 Danny Devine is hoping to spoil the Celtic title celebrations and help Thistle to become the first domestic team to beat the champions this season.

Thistle extended their lead in sixth at the weekend while their opponents secured the league title against Hearts. Speaking to ptfc.co.uk, Danny hopes it will be Thistle who extend their unbeaten run at the expense of their cross city rivals.

He said: “We’re going into the game on a high. It’s never easy going to Celtic Park but the result against Ross County puts us into a more comfortable position in the league. We have a bit of breathing space in sixth place and it lets us go into the game a little more relaxed.

“We are on a great run of form and we want to keep that going. We can’t get complacent with our league position or take anything for granted. We need to go into the game and put in a performance and work hard. We need to do that not just until the split but between now and the end of the season.”

Devine is hoping the winning of the league title means Celtic step down a few gears but he doesn’t think it likely.

“We want to win every game, especially going to Parkhead you want to put on a good showing and we go there confident.

“Celtic have just won the league so they’ll be on a high after that. There is a chance they will drop a few gears but knowing the Celtic team it’s unlikely. Having said that we have to go there expecting a tough, tough game and make sure we impose our play on them and not the other way around.”

The defender admits the incentive to be the first to beat Celtic this season is huge.

“Obviously Celtic haven’t lost yet this season, you always want to try and beat teams like a Celtic but there’s the added incentive of being the first ones to do that this season. We will be going there looking to win the game and come away with a positive result.”

Devine also had some kind words about striker Kris Doolan who reached his 100 goal landmark on Saturday while the centre back is still hoping for his first in Jags colours.

“It’s something special to get to 100 goals at a club, I’ve only come in this season but I’ve played against him and he’s scored against. I’ve always known how much quality he’s got so I’m delighted for him.

“It would be nice to get my first Thistle goal, I’ve come close on a few occasions but not managed yet. Hopefully that comes before the end of the season.”

More exclusive preview interviews, with Liam Lindsay as well as Thistle gaffer, Alan Archibald are available to Jagzone subscribers. Log in now to see them.

Can’t make Celtic Park? Jagzone members will also be able to watch highlights of the game from midnight and will be able to listen to live audio commentary from the east end.