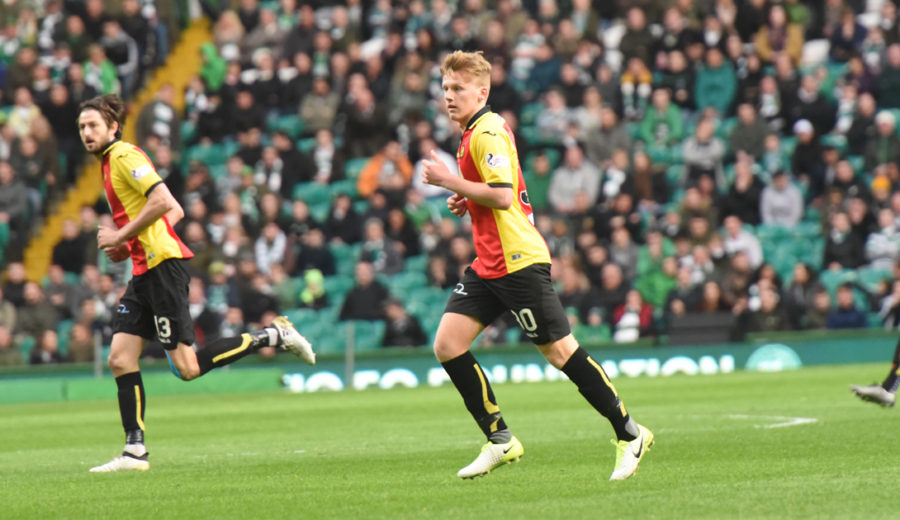 McCarthy: That was a lot different to anything I’ve experienced before.

A resolute team performance from Thistle resulted in the side being only the third team to hold Celtic to a draw on Ladbrokes Premiership duty this season. In the heart of the midfield a young 18 year old called Andrew McCarthy put in an excellent performance, on his full debut, to play his part in helping the side to a point.

The shattered youngster spoke to ptfc.co.uk shortly after the team bus arrived back at Firhill late last night.

“That was a lot different to anything I’ve experienced before, especially against Celtic who are the best team in Scotland by a mile right now.

“I was pleased with my performance but I was shattered at the end. I’ll definitely get a good night’s sleep when I get home! For a while in the first half, I was just chasing the ball. It just felt like defending. The gaffer compared it to a defending training session in the first half but I thought I did alright but I could probably do better. I managed to get a few tackles in, which was good.”

It was the second game of the week for Andy after playing his part in Monday night’s Development League clash against Rangers.

“I played 60 minutes against Rangers on Monday which was just chasing a ball as well because they had the ball for the full game. I obviously played tonight but tonight was a different tempo. It was a lot harder and very different compared to Monday so it was harder on the legs. I should be alright though because I am young.”

Thistle’s point keeps them four clear of Kilmarnock in the top six and the Jags number 30 knows it could prove to be a vital point.

“Tonight was a really good result. I think a lot of people would have written us off and probably have thought we couldn’t have got a result at Celtic Park. The gaffer said before the game that it was a bonus game and that anything we got is a bonus.

“We’ve matched Kilmarnock’s result and kept them adrift of us which is good. They’ll need to go to Celtic Park and win on Saturday which is obviously a hard place to go as we’ve experienced tonight. We’re just focusing on ourselves though and getting ready for Motherwell on Saturday.”

Andrew has been involved around the first team squad since the turn of the year and has found the dressing room a great environment to be around.

“The confidence in the changing room is so high and it makes it better to develop. I learn more from my teammates because they have time to take me aside and talk to me. Players like Ryan Edwards and Chris Erskine are always talking to me and helping me improve as a footballer. Because the confidence is so good, it’s an easy place to be and hang around at the moment.”

There is a clear pathway emerging at Firhill from Thistle Weir Youth Academy to Partick Thistle first team and McCarthy is grateful for the opportunities available.

“The gaffer is really good with that. He tells me all the time I’ll get a chance if I work hard and train hard. He’s really good for it, I think he played Declan McDaid as well against Celtic. He’s obviously done well with Liam over the last season because Liam’s brilliant now.

“Hopefully I can play a few more games. Hopefully I’ve done myself a bit of justice tonight and I’ll get my chance again.”

More reaction from Ade Azeez and Tomas Cerny, as well from Jags gaffer Alan Archibald, is now available to view on Jagzone. Log in now to see it.