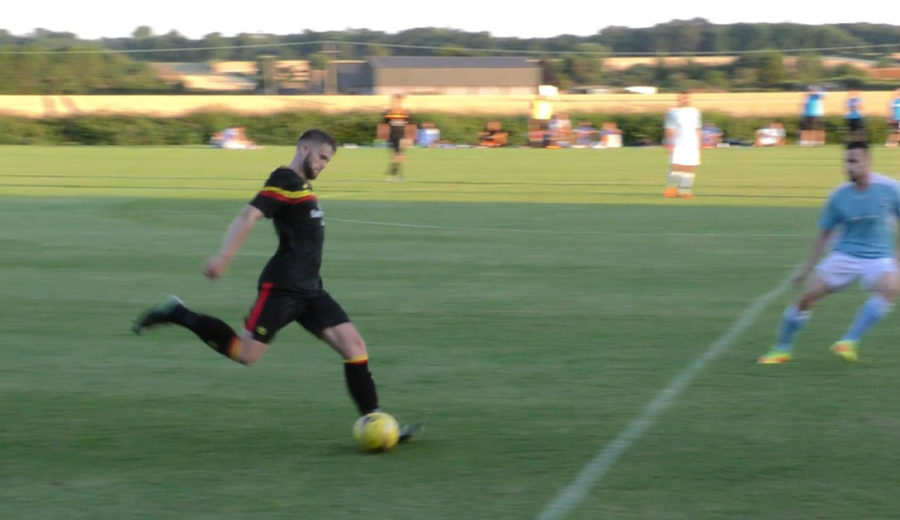 Danny Devine is raring to go as the players step up their pre season programme with an Essex training camp along with a couple of pre-season closed door games designed to build match sharpness and work towards the opening BetFred League Cup match against Livingston.

Devine lined up in centre of defence and marshalled inexperienced central defensive partner James Penrice expertly through the match against Hampton and Richmond Borough.

Speaking after the 0-0 draw Devine said: “I’m feeling good, It was another good workout for the lads and that is what is all about at this stage.

“It’s important to get some game time under your belt and I got another 90 minutes against a big strong team. We knew they were going to be physical so it was something for us to deal with and get used to.”

The players, now in their third week of pre-season, are putting in the hard work in Essex having spent the last couple of weeks in Glasgow and Danny is feeling the benefits of a rigorous pre-season schedule.

“I’m feeling fit and it’s now all about getting the match sharpness and awareness ahead of the League Cup games.

“At this stage of things training picks up even further and you are looking towards those first games of the season.”

The trip gives the new players time to gel with their team mates and the coaching staff the chance to work the players hard in some picturesque surroundings. Devine, having been a newbie 12 months ago, admits it’s important for the players.

“Trips like this are important, it’s good to get the boys together and bond again after a few weeks apart. It lets any signings come in and really get to know and gel with the rest of the group. We have a great bunch of lads here and it’s good to get everyone away.

“We will put in a lot of hard work, some double sessions and really work on everything, We saw with the trip to La Manga in January how important these type of trips can be.”

With not too many new faces Danny is looking forward to getting back into competitive action.

“We’ve kept a lot of the boys together which is great. We have added a couple and I’m sure they’ll be made to feel right at home and we can hit the ground running.

“We have been worked really hard and will make the most of our time down here ahead of the games in just over a weeks time.”

Danny has committed, will you join him? 2017/18 season tickets are now on sale.