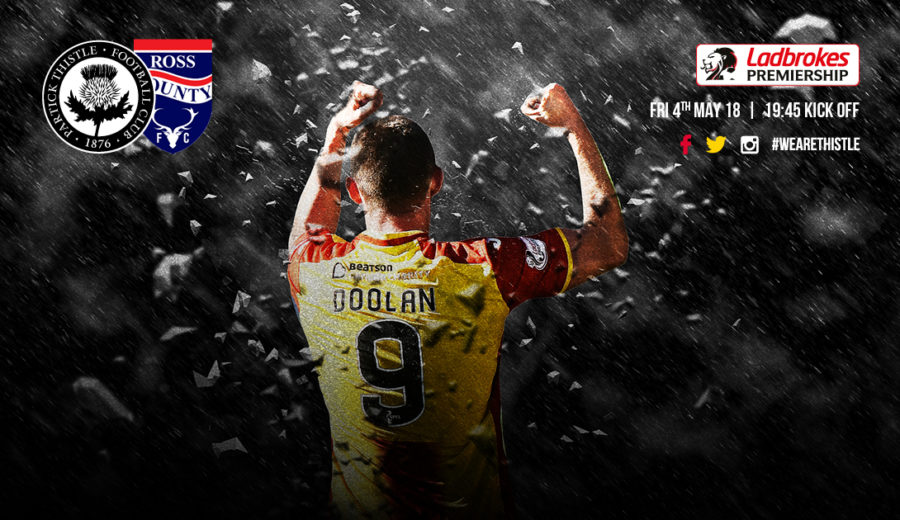 Kris Doolan has urged the fans to play their part in helping the club to Premiership safety as Thistle prepare to face Ross County on Friday night.

The fans favourite knows the fans have a big role to play in supporting the players as they try and pick up three vital points.

Speaking to ptfc.co.uk he said: “The fans have a massive role. In the Hamilton game, John Lambie Day, the spirit and atmosphere that day was tremendous, the fans really roared us to victory.

“It comes across, the players do pick up on the mood and feeling in the Stadium. It’s always nice to look about and have everyone behind you, singing, chanting, encouraging, whatever they are doing. It does make a huge difference.

“The players will feed off that, the fans really are an important part of this push for safety, just as much as the players are. We really do appreciate their support, it is massive to us”

Doolan knows it’s important the players draw off the atmosphere and go out positively from the first whistle. He can’t wait to get out under the Friday night lights.

“Nights under the floodlights at home are different, they are special, they have a different feeling to regular Saturday afternoon games. Especially with what’s riding on the game, it’s going to be a massive night.

“It’s down to us on the pitch to draw on our experience, to use that atmosphere to our advantage, for the big players to play big roles.

“There’s absolutely nothing better than scoring goals at Firhill in these nights. We have to go out positive, we need the fans to stay positive and right from the start go out and win this game.”

Kris feels the match is similar to the Morton game on route to winning promotion to the Premiership and he is looking to call on the same spirit of that night to get a similar result.

“The match has shades of the Morton game the season we won the league. We know what’s riding on the game.

“You want your big players who have been there before, who have played in big games before and can go out and deliver. There are a number of us from that night and we have to go out and handle it the same. It’s the same importance to the season.

“It’s got the same feeling to that game, the feelings around it and what’s riding on it. It’s important we draw on that experience.

“We need to go out and attack, we need to score goals. We’ve done that in the last couple of games. We’ve got players who can create, who can score goals and I feel we can score ourselves to safety.”

“I think the mood about the place has been good all season. We’ve tried our best to keep the mood as high as possible despite results.

“I think after the split the clean slate as we called it has made a difference. It was a fresh start for everyone, We are in a mini league and everything before had been put out our minds. Its picked everyone up a bit and I think it has helped and made a difference.

The importance of the game isn’t lost on Kris and he knows how important keeping the current momentum going is.

“We know how huge the match is, we know what is at stake. We know we have to go out and go for it. We are at home and the emphasis is on winning the match. There is so much riding on the game and we know the win will take us a long way to not finishing bottom of the league and closer to avoiding the play offs.

“It’s important to keep the momentum going, we’ve been behind in both games and fought back. We’ve got the win and then the draw and that shows the battling quality and fight we have in the team.

“We are hoping now to get our noses in front first and see the game out, we want to be on the front foot from the start.

“We want to take the confidence from the games so far into that game, if we can add three points then it’s been a really good start to the split.”

More exclusive preview interviews with Ryan Edwards, Steven Lawless and Jags gaffer, Alan Archibald, are now available to Jagzone subscribers – log in to see them. Jagzone members will also be able to watch highlights of the game.