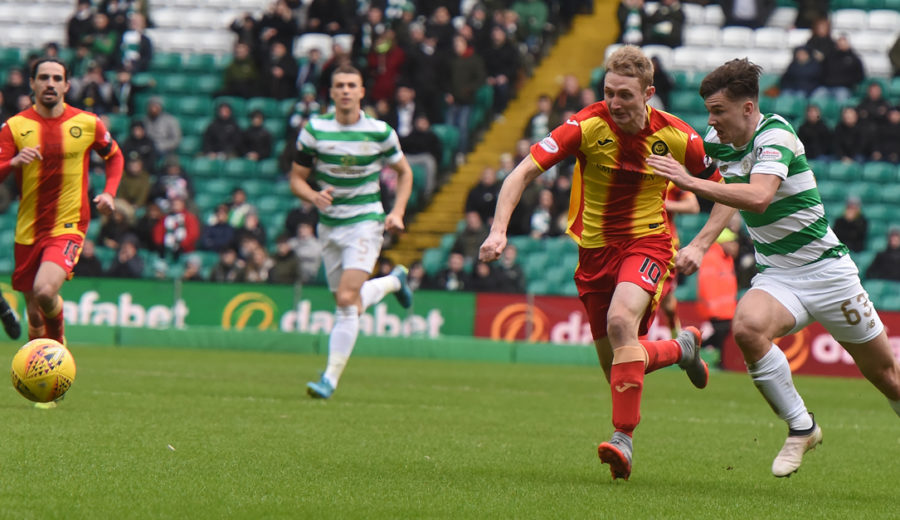 Partick Thistle have had markedly improved fortunes in front of goal since their return from the winter break. The Jags have scored nine in their last six games; much better than the three they managed in the last five games of 2017. Players like Conor Sammon and Kris Doolan have been the main men in front of goal but one man whose contribution has gone under the radar is Chris Erskine. The Thistle number ten has played in five of his side’s last six games and has been involved in goals at Queen of the South and St. Johnstone before grabbing an assist on Saturday as the Maryhill men fell to a 3-2 defeat to Celtic. Against the Hoops, Erskine played the full 90 minutes and was one of the Jags’ best performers. He spoke to ptfc.co.uk following the match.

Chris started by saying that although the team played well for much of the match, the side’s start to the match was unacceptable and that they can only blame themselves.

“The first ten minutes kill us. After that we were very good, I thought. Our shape looked good, we pressed well and moved the ball brilliantly at times but you can’t afford to begin the match like we did. Celtic are a side who won’t let you off with a poor start; they will punish you and we felt the full force of that with the two early goals.”

The midfielder was, however, impressed with his teammates spirit as the Jags quickly regrouped and, after pulling one goal back, matched their hosts well.

“After that opening 15 minutes, it was a very good overall performance. It would have been easy for the lads to just crumble at 2-0 and teams have come here and done that this season but we didn’t let that happen. We tried to get in their faces and throw them off their game and it worked for us. Our first goal comes from me and Kris Doolan cutting off the passes for the defender and in the end he makes a hash of the backpass. It was a great finish from Dools and I think that gave us a little boost that we needed.”

As Chris mentioned, the Thistle press was a key component of the Jags’ play against the Scottish Cup holders, Celtic and the former Dundee United man reckons having more players available gives the side more energy to press with on a game-by-game basis.

“There are a lot more options for the gaffer now we have players like Abdul Osman and Callum Booth back. Guys like Conor Sammon and Miles Storey have been on fire lately and they find themselves on the bench but because we have that larger squad, we can rotate without weakening the starting team too much. I didn’t start either of our last two games but that just means I had the fresh legs to come in today and do my job. It also means we have more options on the bench to change games with. We saw Conor come on and score today and against St. Johnstone, Ryan Edwards came off the bench and was outstanding so hopefully everyone can stay fit until the end of the season.”

Erskine also said he is enjoying his time playing in behind strikers like Conor Sammon and Kris Doolan who are finding the net more regularly now as it allows him to make the best of his abilities.

“Of course it’s good to play with guys who are hitting form. At the end of the day, we’re trying to get the ball in the net and having forwards who are in a purple patch just makes it easier. I mean if you look at today’s game, Dools didn’t get too many touches on the ball but he got his goal which is what you want from your attackers.”

Overall, Chris is happy to see the team improving in the attacking areas having struggled to find the net for much of the first half of the 2017/18 campaign.

“We are definitely looking better going forward. Coming to Celtic Park and getting two goals is tough no matter how many players they have injured and it’s important that we take that into the upcoming league games. I felt that at times during the first half of the season we seemed lost for ideas and it felt like nothing was coming off for us but we’ve been better since the break. We created a good amount of chances this afternoon and with games coming up against the teams around us, we have to keep that going.”

Chris and his Thistle teammates are back in action next Saturday as Dundee travel to Maryhill for a Ladbrokes Premiership clash. Kick-off is 15:00 from the Energy Check Stadium at Firhill.

More reaction from Ryan Edwards and Conor Sammon as well as Jags gaffer Alan Archibald is available now to Jagzone subscribers. Log in now to see it.

Jagzone subscribers can rewatch the full game from Noon or enjoy extended highlights of the William Hill Scottish Cup tie.