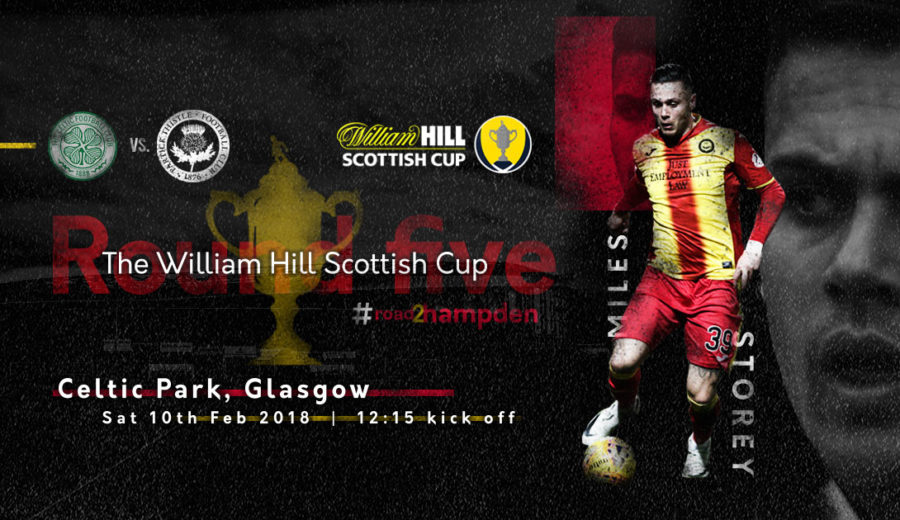 Miles Storey is hoping to give the Thistle fans a day out at Hampden. However he is a aware there is a big hurdle in the way, that of last year’s winners Celtic.

Storey saw first-hand what an extended cup run means to fans last year when he made it to the final with Aberdeen, beating Thistle in the process, but this time he wants to be the Thistle hero instead of heartbreaker.

Despite not featuring off the bench in the final last year he knows how big a day it is. Speaking to ptfc.co.uk he said: “The William Hill Scottish Cup is a big competition, it’s one we want to do well in and we want to get as far as we can for the fans.

“I got to the final last year, unfortunately for me I didn’t get off the bench but sitting watching you see how big an occasion like that is for the fans and the club.

“It would be great to get the Thistle fans to Hampden and I think this season it’s not so cut and dry who is going to win it but first we need everyone to perform their best on Saturday and to get a result against Celtic. Then we can look at what we have to do next but we know how hard it will be”

Despite the tough task of visiting last year’s winners, recent form and results have left Miles feeling positive ahead of the game.

“We’re quite positive. We remember how we played against them last time in the home game where we were unlucky not to take at least a draw from the game. I thought we played very well, we created chances and limited them to very little.

“It’s a different animal at Celtic Park but we go there and look at how we give them the most problems. It’s a cup game. It’s a one off, we have nothing to lose so we will go there and go for it and look to get through to the next round.

“Kilmarnock beat them last week that shows us it’s possible to beat them. That game was at Kilmarnock which is different because of the pitch but we take confidence from that and for how close we were last time at home.”

Despite a negative result during the week against Rangers, Storey is taking a lot of positives from that game and in general how things are going recently.

“We’re disappointed with the result against Rangers on Tuesday but I think we took a lot of positives from that game to add to some very good results recently. We have three really important league games after this but the cup gives us another focus away from the league and we’ll go into the game feeling that we can win it and build on our recent good run.

“The results and performances have everyone feeling good and positive just now, there is competition everywhere on the pitch and we have a good shape in the team just now with players able to play in their best position so everything is going in the right direction just now.”

The front man is enjoying an extended run in the team, albeit out wide on the left, but it’s a positon he is enjoying and feels he can excel in.

“I’m enjoying my run in the team just now, I’m playing on the left which is a position I feel I’m good at. I enjoy running at people and getting the ball and trying to get it into the box. I enjoy scoring but if I can set them up then I’m happy too. I need to maybe get myself into more scoring positions but that’ll come more I get used to that position.

“I’m sure goals will come but I’m enjoying playing just now and trying to make a difference for my team. When I play out wide and up top I drift a lot anyway so I’m enjoying it. With players like Conor and Dools up top and then Ryan Edwards arriving late it’s always good to play out wide with them to support you and try and assist with goals. We seem to be a lot more free flowing just now in terms of creating chances and long may that continue. “

More exclusive preview interviews with Paul McGinn, Martin Woods and Jags gaffer, Alan Archibald, are now available to Jagzone subscribers – log in to see them. Jagzone members will also be able to watch highlights of the game.