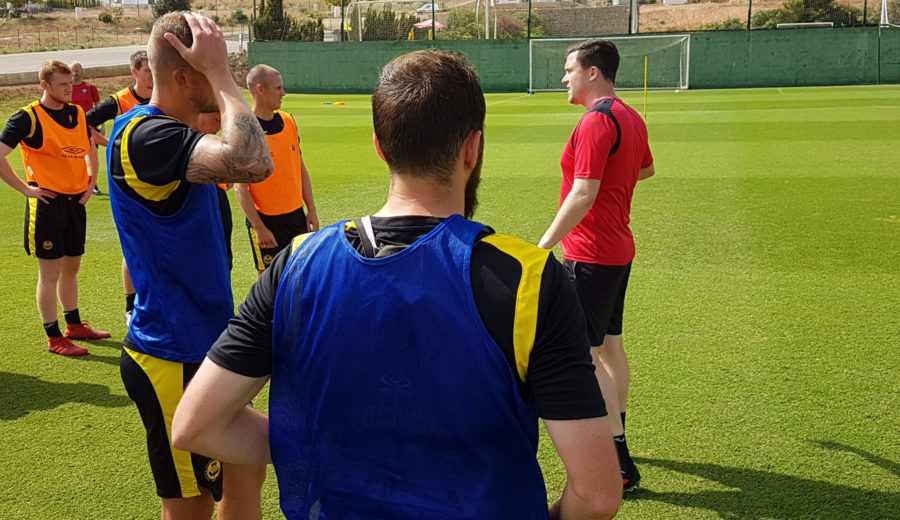 Partick Thistle, this evening, took on Futbol Club Molina to cap off their week at the La Manga Club coming away with a 9-0 victory. Four first half goals were followed by five in the second 45 with Tam O’Ware and Stuart Bannigan on the scoresheet among others. The squad will now return to Scotland over the weekend as the opening game of the Betfred Cup group stages draws closer. Jags boss, Gary Caldwell, spoke exclusively to ptfc.co.uk following the impressive win in Spain.

“We’ve had a fantastic week in a number of different ways that I’ve already spoken about but I felt it was important to finish with a game. It wasn’t easy to get one organised, to be honest, but I’m glad we got one sorted because it does test you in a different way to training, there’s a different mentality.

“The opposition weren’t of the standard that we’ll be facing every week in the Championship but they worked very hard and the boys were ruthless with their chances which was great to see.

“Even in winning 9-0, I could see things that we need to work on, things we can still improve and that’s one of the benefits of getting a game tonight.”

Caldwell gave a mention to Tam O’Ware who made his return from injury after ten months out with a solid 45 minutes in defence, grabbing a goal in the process.

“It was great to see him out playing. He’s had a long time out and those long-term injuries can be so difficult for players but his attitude has been fantastic and getting a half of football should be a psychological hurdle that’s now been cleared for him.

“He played brilliantly too. He was calm and communicated right throughout his time on the pitch providing a great platform for us to push up the pitch and score our goals. He was real leader in defence.”

Another one of the goalscorers was Lewis Mansell and the gaffer was delighted to see the young forward carry the goalscoring touch from the final day of the season into the team’s first pre-season match of the summer.

“It was a really good goal and no matter who you’re playing against, you always want to see your strikers scoring goals. If you can score in pre-season then you go into the new season with confidence and that can be a big thing especially for a young player like Lewis.”

The team fly back home tomorrow with Sunday being used for recovery but then it’s right back into training come Monday as we enter the last couple of weeks of pre-season.

“Everyone’s worked very hard in their time in Spain so they’ll get a bit of time to recover over the weekend. We want them to be re-energised and ready to get back into things on Monday because there is still a lot of hard work and effort to be put in before the competitive football starts.”