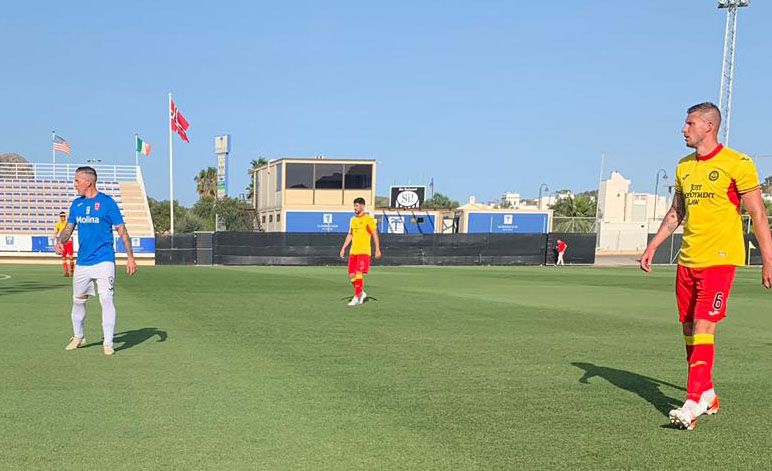 When Thomas O’Ware injured his knee in August of last year at Tannadice, a return from that injury must have felt a long way away. However, the central defender was able to make his comeback last night as he played 45 minutes in Thistle’s 9-0 friendly win over Futbol Club Molina after 10 months out. He spoke exclusively to ptfc.co.uk following the final whistle, firstly describing how good it felt to be on the pitch again.

“It was great to be back out there with the boys. Pre-season’s been hard so far but I’ve been able to do the majority of it. It’s all gone well from an injury standpoint, my knee’s holding up and my body feels good so it was great to get that 45 minutes tonight and come out of it unscathed.”

The Jags’ number four has been back in training for a number of months now but he feels there is a mental barrier that he’s now cleared by playing some minutes in a game, even if it was a friendly.

“When you have an injury like mine, the reality is that you have to take things step-by-step. Getting back to full training was big step and I’ve felt like myself again in training so I’m glad I was able to make another big step by playing a half in that game.

“Now, I need to keep working hard so I can continue to make those steps forward. The competitive games are a couple of weeks away now so I just need to keep pushing myself in training so I’m ready come opening day of the groups.”

O’Ware was one of the Thistle players who got on the scoresheet during the convincing win and he was pleased to know his goalscoring touch hadn’t deserted him during his time off.

“That’s something I hope never leaves me. I got my first goal for Thistle a game or two before the injury so hopefully I can pick up where I left off when the competitive games start.”

Despite the fairly lop-sided score-line, Thistle’s Spanish opponents put the Jags under pressure at a couple of points during the game and Tam felt the game provided a good test for the side at the end of the week abroad.

“We went into the game treating it as professionally as possible and I think you can see that with the score. At this point in pre-season, whether you’re winning or losing, getting minutes under your belt is the most important thing, especially for someone like me who’s coming off the back of a long-term injury.”

Tam finished by reflecting on the entire La Manga trip which he felt was very beneficial to the team’s pre-season efforts.

“It’s been very good. Obviously, a lot of it has been hard work in the sun with double and triple sessions so I’ll enjoy a bit of recovery time over the weekend but, without a doubt, we’ve all made good use of it and are better off physically as a result.”