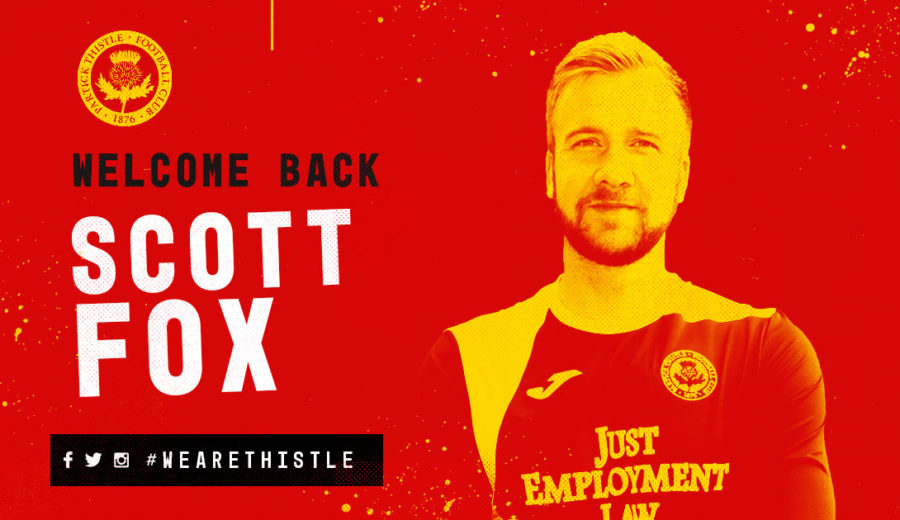 Partick Thistle can today confirm the signing of Scott Fox on a two-year deal, subject to clearance, as the goalkeeper returns to the Club for a second spell.

Fox left Ross County earlier this summer after gaining promotion to the Scottish Premiership with the Staggies. He played 36 league games last term for the Highlanders, keeping 12 clean sheets and conceding 0.86 goals per game.

During last season’s title-winning campaign in Dingwall, Fox also earned himself a spot in the Ladbrokes Championship Team of the Year.

Last season’s wasn’t the first promotion of Scott’s career as he was, of course, a vital part of the Thistle side which won the old Scottish First Division in 2013.

The Scotsman initially came to Maryhill in 2010 after spells with Celtic, Queen of the South and Dundee, going on to make 150 appearances as a Jag before departing for Dingwall in 2015.

Fox will wear number 22 for Thistle.

After sealing his return to the Club, Scott said:

“Having played with Thistle previously, it did make the decision a little easier. I had five good years here and a title win so once I knew a return was possible and learned about the plans that they have for this season, it was something that really interested me.

“I know it’s not a given that I’m going to be playing every week. Jamie Sneddon’s a keen and hungry young ‘keeper who did really well last season so I’m ready for that challenge and I’m looking forward to it this season.”